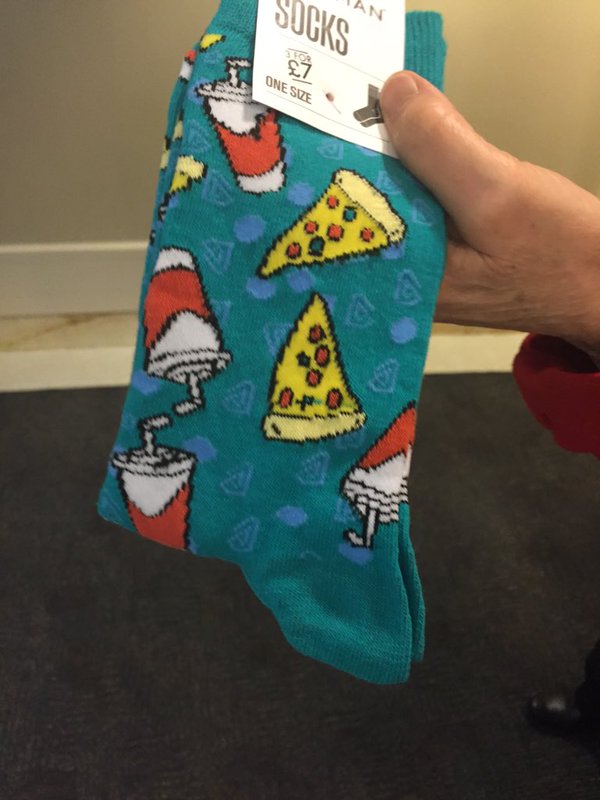 Some Democratic lawmakers are wearing socks at the Roundhouse that make tongue-in-cheek, some say petty, references to Gov. Susana Martinez’ infamous pizza party.

Senate Majority Leader Michael Sanchez wearing socks with pizza and cokes on them, a reference to the incident with Martinez at the Eldorado Hotel in December. Photo Credit: Andy Lyman.

The socks feature cartoons of pizza slices and soda cups, a not subtle reference to Martinez’s infamous Christmas party 911 call.

The teacher’s union, which has clashed with Martinez in the past, says that some Democratic senators will be wearing the socks while she makes her annual State of the State speech, scheduled to begin any minute now.

Martinez got in hot water on Dec. 13, 2015 when front desk staffers at the Eldorado Hotel called Santa Fe police after noise complaints coming from a hotel room she was in.

The front desk said they warned them multiple times to quiet down.

In response, Martinez had the hotel’s front desk call a Santa Fe dispatcher. Martinez told the dispatcher to send the cops off, and explained that all she was doing in the room was eating pizza and drinking cokes.

She said if anyone had been throwing bottles, as the front desk claimed, it was hours before.

Martinez later apologized for the actions of her staff and guests.