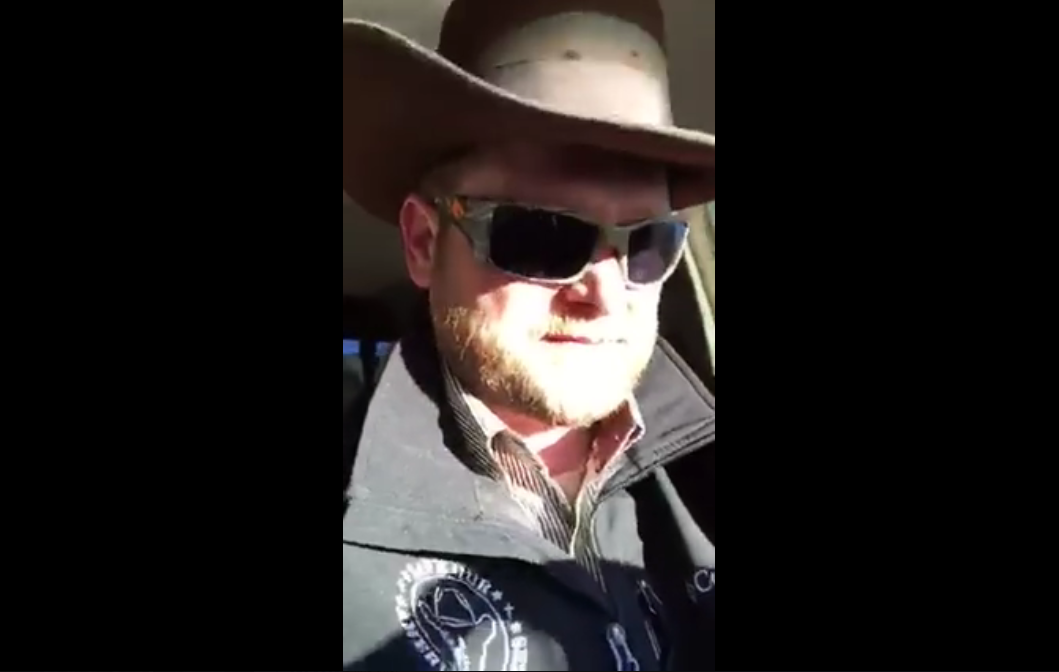 Screenshot from a Facebook video posted by Adrian Sewell on his way to Malheur National Wildlife Refuge in Oregon.

A rancher from New Mexico made headlines because of his involvement in the Oregon occupation of a federal wildlife facility by militia members who oppose federal ownership of lands.

The Associated Press reported that he was the only rancher to renounce his federal grazing permit at an event held on Saturday.

The man is Adrian Sewell, a rancher who is from Grant County in southwest New Mexico.

The group occupying the Oregon facility is led by Ammon Bundy, the son of Nevada rancher Cliven Bundy. Cliven Bundy became a national figure after an armed stand-off with federal agents over their efforts to collect on fines for grazing on federal lands

A peaceful protest over the imprisonment of a father and son on arson charges on federal land led to Ammon Bundy and others taking over the Malheur National Wildlife Refuge in early January.

Those who were convicted of arson have said they don’t agree with the occupation of the wildlife refuge.

Ammon Bundy reportedly said late last week that lawmakers from New Mexico were headed to the protest; he did not name the legislators and it isn’t clear if he meant Sewell.

The legislature is currently in session. The House was in session on Friday, though the senate was not.

Sewell posted a somewhat rambling video on Facebook, which is embedded below, earlier this week. In the video, Sewell asks for support and prayers from those who agree with his decision.

“I’m on my way into battle,” Sewell says. “And I need your prayers because there’s a lot at stake. My life, my liberty and my property.”

“Ladies and gentlemen, I truly believe that the battle is for your mind, but the war is for your soul,” he says.

Sewell also posted a photo with LaVoy Finicum, a prominent face of the occupiers. Sewell wrote, “Meeting my heros [sic].”