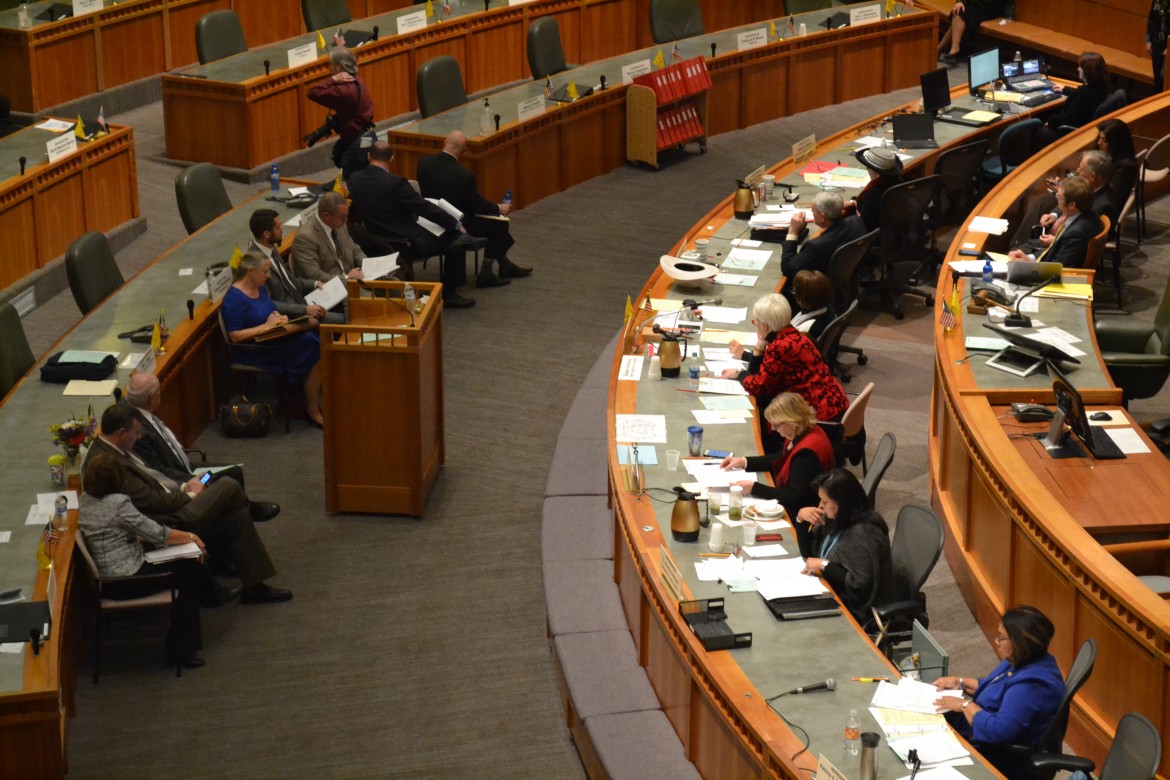 Some lawmakers are raising questions about a House Republican placing the family of a high profile crime victim at the center of his bill.

But the sponsor of the bill aimed at toughening the state’s three strikes law denies he is being anything but genuine.

“I did not solicit them to testify,” state Rep. Paul Pacheco, R-Albuquerque, said. “They have been active ever since those incidents occurred.”

During a House Regulatory and Public Affairs Committee meeting last week, Pacheco presented his three strikes legislation and presented Alan and Veronica Garcia, the parents of Lilly, a four-year-old who was shot and killed after a road rage incident. Some Republican legislators are calling the bill “Lilly’s Law.”

Tony Torrez, the man charged with killing Lilly, has a criminal past, but was never convicted of  a violent offense that would have applied to either the state’s current three strikes law or the expanded list of crimes in Pacheco’s proposed expansion of that law.

Sen. Lisa Torraco, R-Albuquerque, who previously told NM Political Report that three strikes laws are “draconian” and “a step backwards,” admitted that she didn’t realize that Pacheco’s bill would only apply to violent offenders when she made that statement. While she maintains her general opposition to three strikes legislation, she supports Pacheco’s specific bill.

“I stand by ‘three strikes; is draconian,” Torraco said.

Torraco didn’t criticize Pacheco’s bill itself, but said she was still unsure why Pacheco is using the Garcia family as an example in committee hearings.

“I don’t know why [the bill] is attributed to her because I thought that Torrez didn’t have any convictions,” Torraco said.

Rep. Antonio “Moe” Maestas, D-Albuquerque, also raised questions about why Pacheco presented the Garcia family and their story during a recent committee meeting.

“It implies that if this law were on the books back in the day, this crime wouldn’t have happened,” Maestas said.  “Or if this crime was on the books the day it happened, we would have the legal authority to send this guy up the river forever.”

Maestas said neither scenario would be true. Torraco agreed.

“It wouldn’t have affected him at all,” she said.

Pacheco told NM Political Report that he wasn’t sure if his three strikes legislation would have applied to Torrez and that he would have to double check the bill.

Maestas and Torraco were previously co-chairs of the now-defunct Criminal Justice Reform Subcommittee. Both have sponsored bills aimed at tougher criminal penalties while also keeping an eye on reforming the criminal justice system.

“The guy who killed Lilly should be sent to prison for life even though it’s his first strike,” Maestas said. “Overtime, those systems will treat first and second offenses lighter because of that hammer on the third strike.”

“It’s the best crime bill to put on a postcard in election season,” Maestas said. “When you get down to brass tax it doesn’t deter crime.”

House Majority Leader Nate Gentry, R-Albuquerque, told NM Political Report the intent of the bill is simply an attempt to add tougher penalties and address repeat offenders. Gentry denied that the legislation was part of a strategy to target Democrats in the fall.

Still, Maestas said he doesn’t know why the Garcia family testified in committee for Pacheco’s bill.

Pacheco said he was offended at the suggestion that he was using the Garcia family for political gain.

Pacheco said the Garcia family has been actively looking to change laws and he had little to do with them stepping forward in committee.

Pacheco pointed towards research, conducted by the New Mexico Sentencing Commission, that he presented in the House Regulatory and Public Affairs Committee last week. A representative of the sentencing commission testified that only 60 people would have been sentenced to life over a 15 year period if Pacheco’s bill were already law.

“That’s not a large amount of people, but they’re committing an inordinate amount of crime,” Pacheco said.

Pacheco mentioned no less than four times that he took great offense to any suggestion that he was not being genuine when he presented the Garcia family in committee.

“That’s such an insult to those families,” he said. “They have gone through so much suffering, my hearts go out to all of them.”

The House Judiciary Committee is slated to hear one of two bills aimed at toughening the state’s three strikes law on Tuesday.

With a Republican majority, it is likely that Pacheco’s bill will successfully pass the House Judiciary Committee on Tuesday before it heads to the House floor where a lengthy debate is inevitable.

Clarification: We made it clear that Torraco supports Pacheco’s version of the legislation.