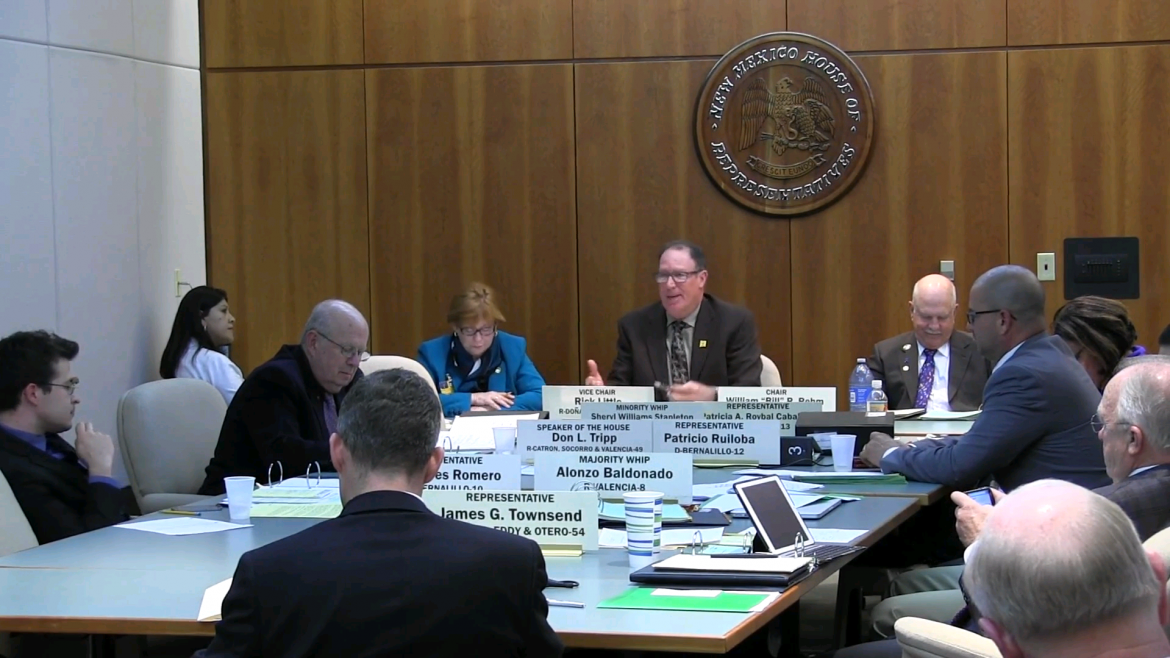 Screenshot of webcast of House Safety and Civil Affairs Committee hearing on Jan. 26, 2015.

Rick Little found himself at the center of attention following his committee’s passage of a law that would add police officers to the list of protected classes in the state’s Hate Crimes Act.

Screenshot of webcast of House Safety and Civil Affairs Committee hearing on Jan. 26, 2015.

Instead of discussing the high profile bill in an election year, focus was on the Chaparral Republican’s comments at the end questioning whether some of the protected classes under the Hate Crimes Act, such as gender identity or sexual orientation, are lifestyle choices.

KRQE-TV tried to pin down Little on whether or not he thinks sexual orientation is a choice. Little would not immediately answer and his handlers tried to pull him way, but reporter Alex Goldsmith pressed on, saying it was a yes or no answer.

He also said that his quote was taken out of context. But video shot by a governor’s staffer available online shows his full comments on the matter.

Both the video from KRQE and from the House Safety and Civil Affairs Committee, of which Little is Vice Chair, hearing are available at the bottom of this post.

At the committee hearing, Little spoke about others, like law enforcement officers, who he thinks should be added to the list. His comments addressed whether protected classes under the state Hate Rights Act are choices or not. Several Democrats at committee argued that protected classes like people of color and LGBT people aren’t personal choices, whereas working as a cop is a personal choice.

“If you’re gonna do it, you say there’s not choices on some of these things. Well there is,” Little said. “We’ve got religion on there, there’s choice on religion. You can decide to be of any religion or not that you want, so there’s a choice there.”

“You’ve got some other things on here that I think are choices but other people may not. But, as far as your sexual orientations, your gender identity, your— those are and I believe in a lot of cases decisions that people make. But the homeless, I mean—. We could, this could, and should all those people be put on this list? I think so. If you’re going to have it, let’s do it.”

At this point, Rep. Patricio Ruiloba, D-Albuquerque, interjected and called for the previous motion and Little finished his comments.

The homeless comment is likely in reference to efforts by Sen. Bill O’Neill, D-Albuquerque, to add homeless people to the state’s hate crimes law.

Still, the comment was not exactly what a meme posted by Equality New Mexico quoted Little as saying.

The meme said, “People choose their sexual orientation, so they shouldn’t be protected by hate crimes law…” and quoted “Rep. Rick Little, R-Doña Ana and Otero (non-scientist of any kind).”

Little isn’t the first politician to be tripped up over the question of whether sexual orientation is a choice. One-time Republican presidential frontrunner Ben Carson, a neurosurgeon, told CNN it is “absolutely” a choice. He later apologized, though Time found inaccuracies in his apology when he said that science was undecided on whether being gay is a personal choice.

Little also said that he opposed hate crimes laws in general, but that if they were on the book, police officers should be involved.

He also said that if police officers are added, the health care workers, Children, Youth and Families Department staffers and corrections officers should be included as well.

“We are listening to you,” Little said as the committee ended. “Whether you believe it or not.”