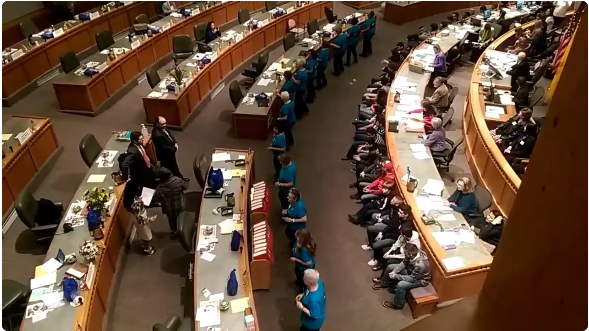 The Silver Stompers from Silver City danced for the House on Feb. 3, 2016.

Just a few things that we noticed at the session that didn’t quite make it into a full story.

—At the end of the Senate floor session on, Sen. Gerald Ortiz y Pino, D-Albuquerque, spoke about priorities for this year’s legislative session.

The Silver Stompers from Silver City danced for the House on Feb. 3, 2016.

He says that if they did all of them “there would be no new money available for anything else” for several years if they were all passed.

“I know that tapping the permanent fund in some way lessens the amount available in the future,” he says. He says Richardson cut the income tax “drastically” “and lost hundreds of millions of dollars of revenue” and that they cut corporate taxes under Martinez.

“This year we’re going to be cutting services because we simply don’t have enough revenue because we cut taxes so drastically,” Ortiz y Pino said, noting that Martinez has said that they have balanced the budget without raising taxes or cutting services.

Ortiz y Pino said that he felt better after getting that off his chest.

—Sen. Mark Moores, R-Albuquerque, responded and said, “Well I don’t feel better.” Moores said that he hoped to “have a debate” and said “we’re supposed to be talking bills.”

—That feeling when you support the wrong bill. PRC commissioner Pat Lyons, in the audience, stood in support of a proposed constitutional amendment. Then another person representing a group did. Which is normal.

When Lyons stood to speak on the actual bill, chairman James Smith, R-Sandia Park, joked, “Have you changed your mind?”

—Legislators got potato chips marinated with red chile powder as gifts Wednesday. On the House floor, Minority Leader Brian Egolf, D-Santa Fe, joked with his colleagues that he had spoken to a medical professional who told him that the chips were tainted. He then instructed all members to bring their potato chips to the House Democratic leadership office, which would then take care of the situation.

—The Senate Democrats had a press conference and sent the entire thing out on Periscope, a popular livestreaming service. Who says the Legislature is always years behind when it comes to technology?

—The Silver City Stompers dancing to “Mambo No. 5” on the House floor on Wednesday morning.

—And a great idea from the peanut gallery on liquor licenses.

If the NMSpaceport gets a liquor license the Railrunner should get a bar car. #nmleg