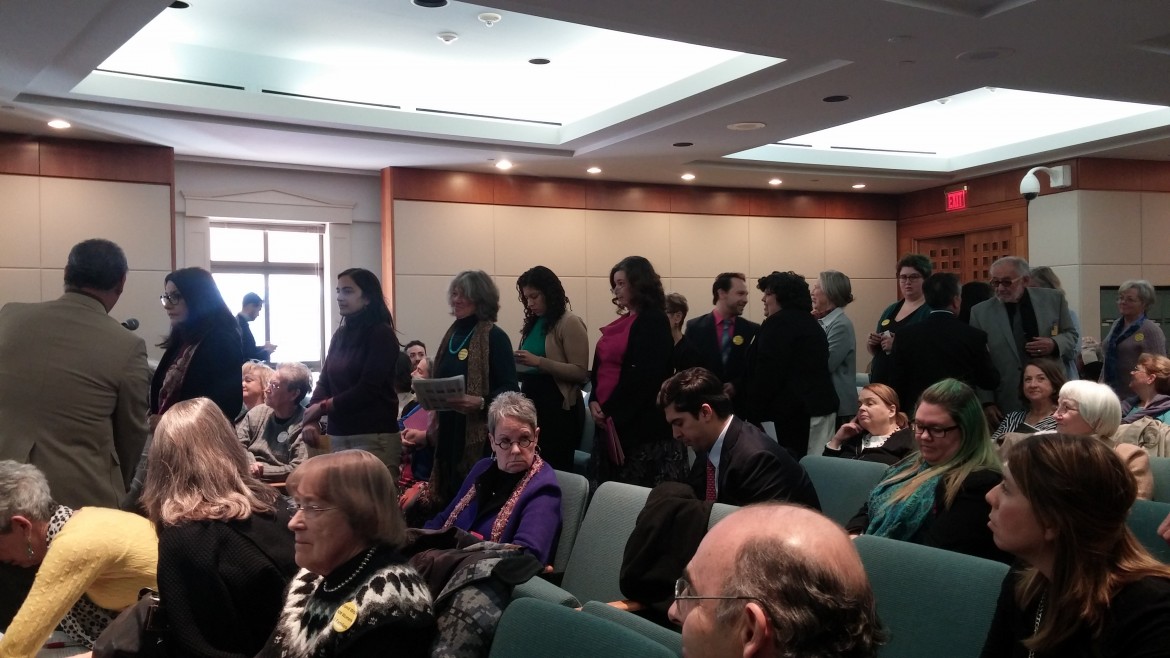 People speak against HB in House Health Committee on Feb. 4, 2016.

Testimony got heated during the hearing of a bill that would legally define when an infant is “born alive” and require emergency medical intervention if so.

Public testimony over the bill, which is aimed at regulating late term abortion procedures, got so long that House Health Committee Chairman Terry McMillan, R-Las Cruces, delayed debate and a committee vote to another day.

“I expect at least an hour of question and debate on this issue,” McMillan said.

The bill defines “born alive” as an infant showing signs of life that include breathing, a heartbeat, a pulse in an umbilical cord or muscle movement. It applies to infants that show these signs after abortions, as well as births and cesarean sections.

Proponents argued that the bill actually has nothing to do with abortion.

“This bill does not in anyway interfere with a woman seeking an abortion,” Rod Montoya, R-Farmington and sponsor of the bill, said. “It just puts in place what we should be doing in this state to protect the rights of that child.”

Anthony Vigil, a surgeon based in Albuquerque, argued that doctors performing abortions don’t have to provide as much documentation as they do for other surgeries.

“This is an area unparalleled in medicine for lack of oversight,” Vigil told committee members.

Other medical professionals who testified strongly disputed the claim, arguing that abortion providers are already regulated by medical boards.

Neha Bhardwaj, an obstetrician gynecologist based in Albuquerque, told NM Political Report that the bill contains no standard operating procedure of how hospitals would follow its “massive” new regulations.

The bill also doesn’t specify an age of fetal viability, which is the age when a fetus can be resuscitated and has more of a change to survive than die. The age of viability differs at hospitals depending on resources, but is often around 24 weeks of gestation. Bhardwaj said the bill would require mandatory resuscitation of a fetus as young as 12 weeks, for example.

Lauren Thaxton, another obstetrician gynecologist based in Albuquerque, told NM Political Report that the bill is emotionally based and not grounded in medical reality.

“There are certain pregnancies where there is no intervention we have that would result in a healthy baby,” Thaxton said.

Others argued that the bill places politicians in charge of medical decisions.

“What we need in those situations is a prepared team,” Abigail Reese, a nurse midwife, said in testimony. “That includes a well informed patient and evidence based guidelines supporting us.”

At the end of debate, Montoya promised many of the concerns people brought up were fixed in an amended version of his measure. Legislative debate over the bill could come as soon as Saturday.