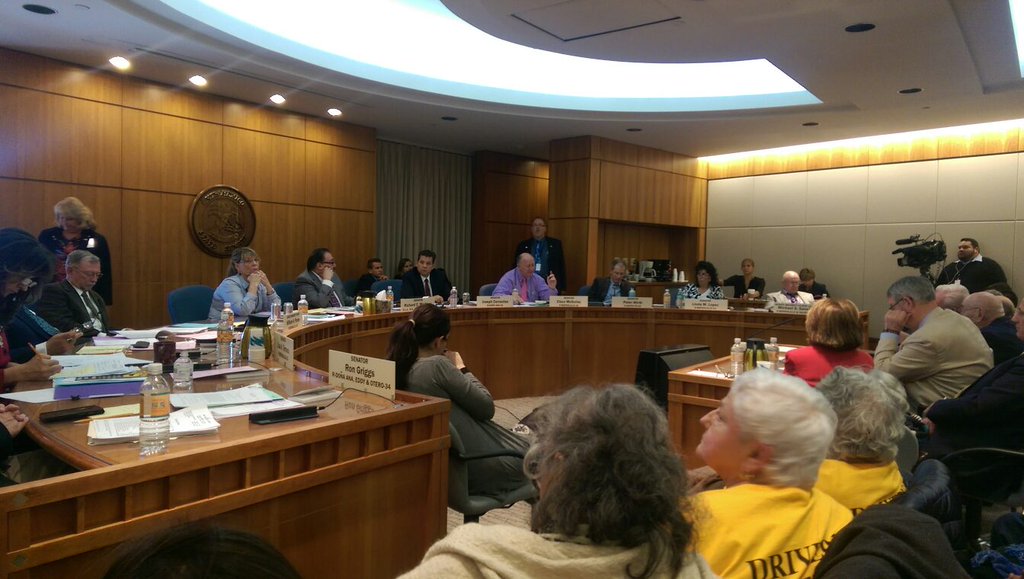 Emotional testimony and talk about heated rhetoric preceded a unanimous vote Friday in the Senate Judiciary Committee to pass a bill to put New Mexico in compliance with the federal REAL ID Act on.

The committee commended Smith and Ingle for working on a compromise bill separate from the House bill that cleared the Senate Public Affairs Committee after extensive changes.

“The big, fundamental difference when you really get down to it [is] the ability to opt out of REAL ID,” Smith told NM Political Report after the hearing. “And that’s a huge difference in the two bills.”

The two-tier system would have one tier that is REAL ID compliant that only those who are here legally could have. The lower tier, which is not REAL ID compliant, would require renewal every two years.

He also noted that Gov. Susana Martinez and her administration are pushing hard for requiring fingerprints. The Smith-Ingle version does not include that language.

The House Republican caucus sent out an amendment from a 2011 driver’s bill.  The amendment required fingerprints and received the support of most Democrats, including Senate Majority Leader Michael Sanchez of Belen.

While Sen. Cisco McSorley, D-Albuquerque, asked technical questions of Padilla and Department of Public Safety Secretary Greg Fouratt, most of the debate from members of the committee focused on the rhetoric and tone surrounding the issue over the past six years.

Sanchez, who has been the aim of political attacks on the issue for years, spoke at length about this.

“I have never seen an issue in the New Mexico Legislature that has divided the people and the ugly political rhetoric that has gone on towards human beings,” Sanchez said in a long, emotional monologue. “I just have never, ever seen it before.”

One thing Sanchez noted is that some of heated rhetoric came from Hispanics against those who are in the country illegally and that it “surprises him to no end.”

“It’s the Legislators and politicians who use the ugly language so that these haters can come out of their holes and start doing the things that they do,” Sanchez said.

Committee chair Richard Martinez, D-Española, was the sponsor of the bill that allowed undocumented immigrants to obtain driver’s licenses back during Gov. Bill Richardson’s administration.

He said that he probably received even worse messages than Sanchez.

“They can think whatever they want about me, and that’s fine,” Martinez said.

Sen. Bill Payne, R-Albuquerque, said he was gratified to see wide public support for the issue.

“When I saw this room packed the way it was, I thought it was going to be just the opposite,” Payne said.

He noted that Allen Sanchez, executive director of the New Mexico Conference of Catholic Bishops, supported the bill. The Catholic Bishops have long adamantly opposed efforts to take driver’s licenses away from those who are in the country illegally.

While a wide array of those in the public, including the Greater Albuquerque Chamber of Commerce and the New Mexico Association of Commerce and Industry, supported the Ingle-Smith bill, there were two notable opponents of the new version: Fouratt and Padilla.

Fouratt said he was worried about fraud.

“The fingerprint provision would go a long way to deterring that,” he said.

“There’s some things needed that we don’t agree with,” Nuñez said.

Smith reiterated that his door and Sen. Ingle’s doors were open for anyone who wanted to discuss compromise on the legislation.

“We’ve communicated that with the executive branch,” he told the committee.

“What we really want to do at this stage is to have a pretty strong support in the New Mexico state senate to say ‘hey we’re determined,” Smith added. “Obviously we have, it appears very strong bipartisan support, and that was the only thing that was missing on the House side.”

Smith said that Senate Finance Committee, the committee which he chairs, will likely take up the legislation on Monday.

“We’ve got to move on it quickly because we’re fixing to get House Bill 2 over,” Smith said, referring to the state budget, which the House is considering on the floor this weekend.