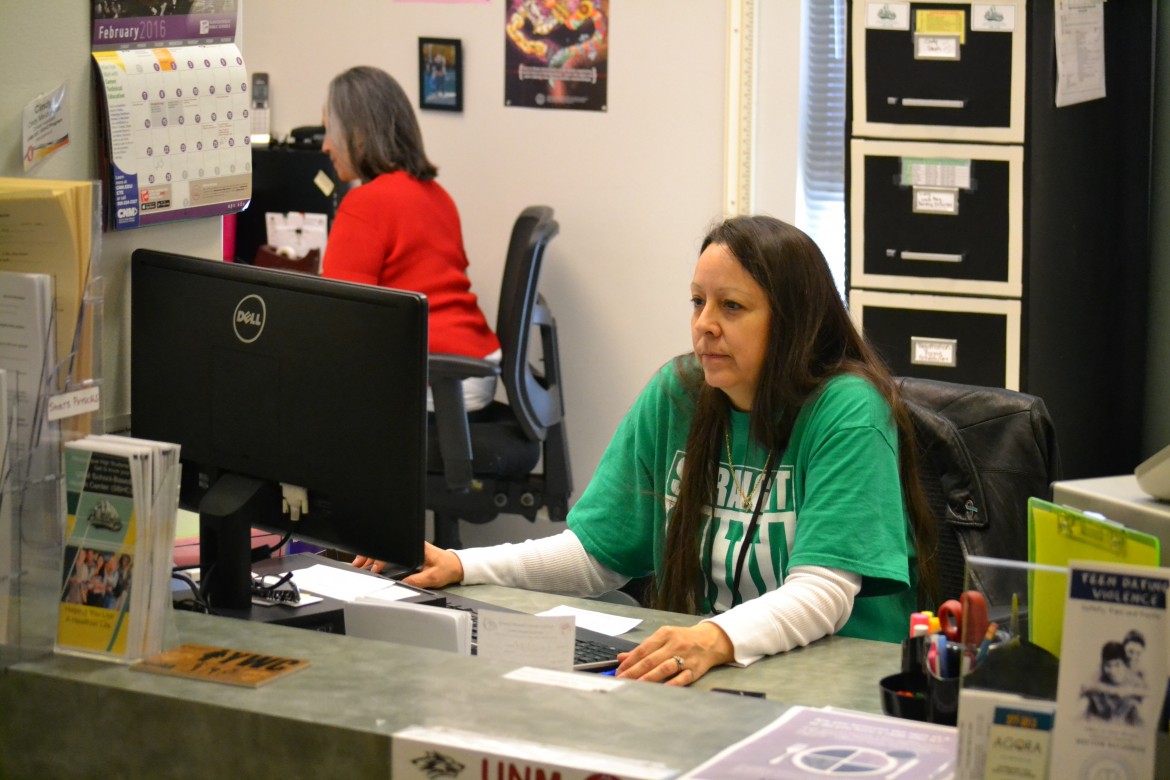 Monique Vallabhan, a certified nurse practitioner, recalls recently treating a student with a headache referred to her by the school nurse at one of Albuquerque’s largest public schools.

The student left class to get ibuprofen from the school nurse, which Vallabhan prompted her to conduct a brief checkup. It turns his headache came after his dad kicked him in the head.

Vallabhan connected him with the school health clinic’s resources, which includes a psychiatrist and a behavioral health therapist.

“If he just took ibuprofen, those kind of things would be missed,” Vallabhan, who coordinates a full health clinic in Albuquerque High School, told NM Political Report in a recent interview.

Another coordinator for the school-based health clinic, Cindy Maldonado, brings up a similar anecdote about how a teacher recently caught a student sleeping in class and sent him to the clinic.

“He’s an honor student, but he was just sleeping in class so she was worried about him,” Maldonado said.

It turned out that the student was having a major problem at home. Without the health clinic in school, Maldonado said the student would have likely had a tougher time getting the help he needed.

The clinic that Vallabhan, Maldonado and a handful of others help operate is one of 53 across the state that offer full healthcare services to students in schools. Each relies on roughly $50,000 each year from the state Department of Health for support—enough to make up 40 percent of the Albuquerque High School clinic’s yearly budget.

And this year, DOH is slated to cut at least $300,000 that go to these type of clinics—enough to fully eliminate state funding for six school-based health centers.

The cuts could increase. DOH is facing $11.7 million in cuts to its entire department this year and has not decided where all the cuts will fall. The department’s funding for school-based health centers comes out of its Public Health Bureau, which “tend to get a large bite” during budget cuts that “tend to trickle down,” according to Nancy Rodriguez, executive director of New Mexico Alliance for School-Based Health Care.

“Nobody is living by DOH funding alone,” Rodriguez said.

Albuquerque High School’s clinic, for example, is largely funded and run by the University of New Mexico. But she adds that state funding “keeps them in the black in some cases.”

“Which is why if they lose it, they will have to close or turn children away,” Rodriguez said.

Two spokesmen for DOH didn’t return calls or emails for this story before press time. Nor did a spokesman for Gov. Susana Martinez, who has the power to line-item veto the $300,000 in cuts written into the state budget for fiscal year 2017 that currently sits before her desk.

But during a year that saw state revenues drop after sharp oil and gas price declines, school-based health centers are just one of many public programs slated for the chopping block. Despite the budget realities, critics point what they see as the state’s misplaced priorities, such as this year’s funding increases for the Department of Corrections and a lack of coming up with new ways to secure state funding.

Meanwhile, New Mexico ranked 49th in the nation in childhood well-being by the Annie E. Casey Foundation for the past two years in a row.

“All that was done was trimming,” he said.

State funding for school-based health centers saw its biggest increases during Gov. Bill Richardson’s administration. But they started seeing cuts during the beginning of the economic downturn in 2010 and haven’t recovered to pre-recession levels since then, even when oil and gas prices pushed the budget upwards in recent years.

More funding for school-based health centers usually leads to more student visits. An increase in state funding from $2.5 million in 2014 to $3 million in 2015, for example, led to a statewide spike from 43,000 visits throughout the state to nearly 49,000 visits, according to state data.

Because cuts for programs like school-based health cares are relatively small compared to other parts of the budget, they’re more likely to go under the radar. But that doesn’t mean they won’t be felt.

Adolescents are one of the least-likely demographics to seek out healthcare for three main reasons, according to Vallabhan—a lack of transportation, having to miss school to go to an appointment and their parents’ likelihood of missing work to bring them to a doctor’s appointment.

Clinics in rural settings, such as the Region IX Education Cooperative’s school-based clinic in Ruidoso, may feel a bigger impact. The clinic in Ruidoso serves five school districts in Lincoln County and relies on 85 percent of its funding from the state, according to Program Director Brenda Motley-Lopez.

“If they take those dollars away we may not be able to function as well, if at all,” she said.

Motley-Lopez estimates that her clinic, which employs three full-time behavioral health specialists who each spend one day out of the week providing care in one of the outlying school district, served 160 students for behavioral health issues alone in January.

“We’re hurting these kids by taking these dollars away,” Motley-Lopez said.

Another reason cuts to programs like these fly under the radar is because the type of care school-based health clinics focus on don’t necessarily translate to short-term cost savings. Albuquerque High School’s clinic, for example, gives each student a comprehensive health risk assessment every year based on guidelines from the American Academy of Pediatrics.

“It’s everything from, ‘How many fruits and vegetables do you eat?’ to ‘Do you feel safe?’ to ‘Do you have sex and is it protected or not?’” Carol Pierce, program manager for Envision New Mexico, which focuses on child health care, told NM Political Report.

Vallabhan points to childhood obesity, which makes up nearly 13 percent of the state’s youth, as a problem school-based health centers can help resolved now.

“If we don’t address their health maintenance issues and risk issues at this time, we are going to be in a big huge problem when they become adults,” she said.