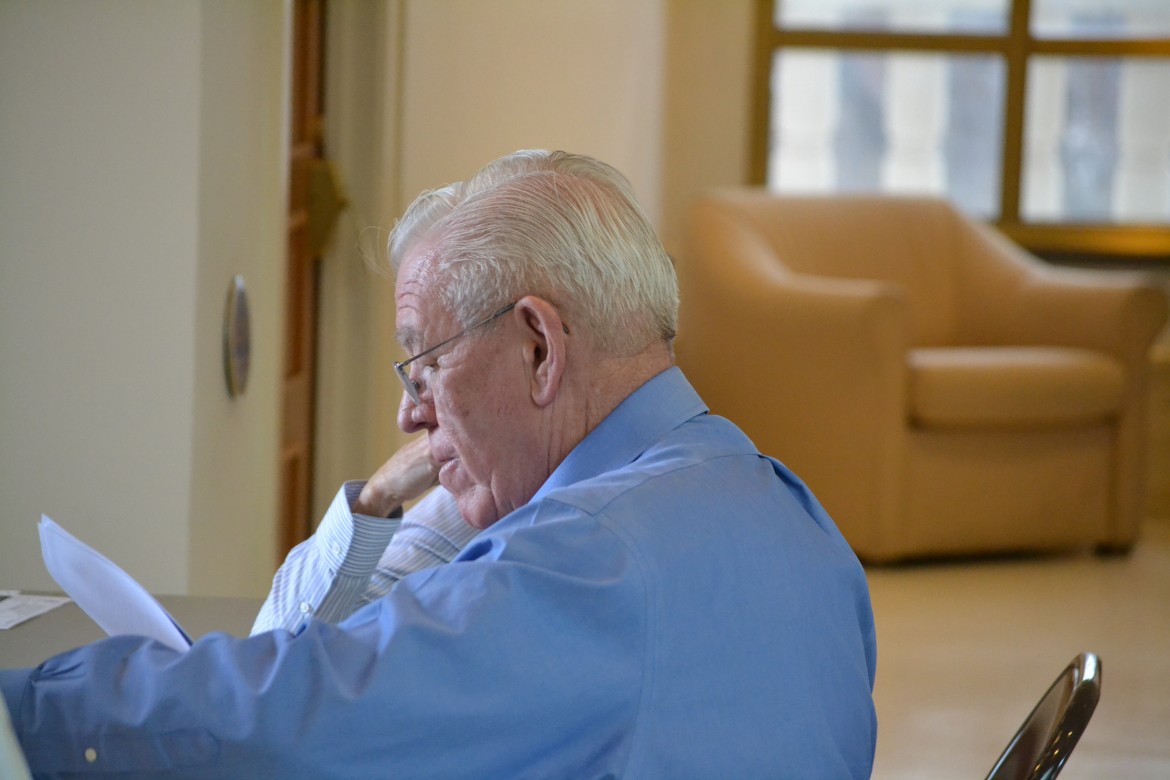 Sen. John Arthur Smith filling out forms to file for reelection in 2016.

Filing day took place for candidates for many positions throughout the state—but the main focus is on state representatives and state senators.

Two contested primaries with former legislators trying to return to the Roundhouse will likely receive a big amount of attention in the next two months.

Former State Rep. Sandra Jeff of Shiprock is back running for office, this time in the state Senate.

Jeff will be taking on incumbent Benny Shendo of Jemez Pueblo in the Democratic primary  Senate District 22.

Jeff was a wild card in the house Democratic caucus, sometimes voting with the Democrats but also breaking with her party to vote with Republicans on some key issues.

A former Senator is taking another crack at getting back his old district, as well.

Shannon Robinson represented Senate District 17 from 1989 to 2008, when he lost in the Democratic Primary to Tim Keller.

Robinson then switched parties in 2012 to run against Keller as a Republican. Keller won with just under 65 percent of the vote.

Robinson has switched back to the Democratic Party and is running again in District 17; this time, he faces Mimi Stewart. The Bernalillo County Commission chose Stewart to replace Keller when Keller won the race for State Auditor.

Eight Representatives and two Senators aren’t running for reelection this fall. In each of these races there are primaries with more than one candidate in at least one party.

Photo from the Secretary of State’s office on filing day, 2016.

House District 24 is a great example. It is not only an open seat since Conrad James opted not to run, but is in a swing district, so it attracted multiple candidates from each party. Former State Rep. Liz Thomson wants the seat back after losing it to James in 2014 (she beat James in 2012). But she will have to face consultant Carolyne DeVore-Parks in the Democratic primary.

On the Republican side, James already endorsed chiropractor Christina Hall. That didn’t stop teacher Ryan Doyle from joining the race.

House District 48, on the other hand, is a different story. There are three Democratic candidates, but no Republicans.

The reason why is it is one of the more Democratic-heavy districts in the state; Rep. Luciano “Lucky” Varela opted to not run again. His son, Jeff Varela, is running instead.

The younger Varela, a consultant with experience in state government, will face Linda Trujillo and Paul D Campos in the primary.

Trujillo is currently the Santa Fe School Board president, while Campos is a former Santa Fe County Commissioner.

Varela is one of two sons running to replace their fathers. Darryl Madalena is running in House District 65 to replace James Roger Madalena, who decided not to run for another term in the House.

The younger Madalena, who is a Sandoval County Commissioner, will face Derrick J. Lente in the primary. Lente is an attorney and the chairman of the Middle Rio Grande Conservancy District board of directors.

There is no Republican running.

The winner will face Harold W Murprhee of Sandia Park, the lone Democrat to file.

On the other hand, congratulations to 22 members of the House and 17 members of the Senate who already essentially won election by having neither a primary or general election opponent.

Sen. John Arthur Smith filling out forms to file for reelection in 2016. He faces no competition in either the primary or general election.

There is still the chance of an independent or write-in candidate filing at later dates to run, but the odds of one winning, if the past is any indication, is essentially zero.

That is nearly one-third of the House and over 40 percent of the Senate that can breath easy from now until November.

In four Senate districts, candidates will only need to win a primary and then will face on general election opposition. All of these are contested Democratic primaries.

That means that in 21 of the 42 districts, there will likely be no real choice for voters in the general election.

In the House, there are seven races where the primary winner will face no opponent in the general election. Like in the Senate, these are all contested Democratic seats where no Republican ran.

The Republican Party of New Mexico sent a press release bragging about how no incumbents will face primary competition.

“We’re also very proud that our party has unified behind our candidates, unlike the Democrats who have primary challenges for 11 different incumbents,” the statement reads. “The six primary challenges that Senate Democrats have to contend with show that voters are so unhappy with Democrat leadership in that chamber that even Democrats want to vote against those in charge.”

Three of the incumbents in each of the House and Senate will face no Republican competition in the general election, as the Republicans were unable to find candidates to run in those races.