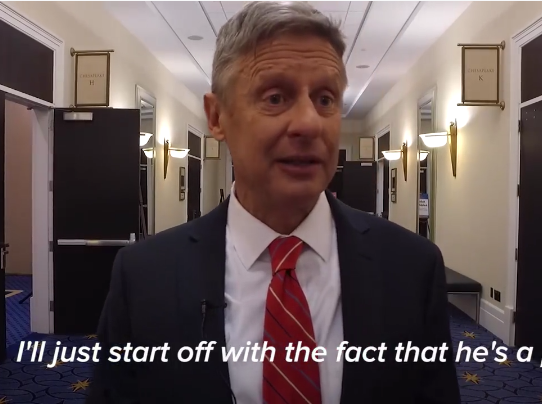 Johnson is seeking the Libertarian Party nomination for president while Trump is the Republican Party frontrunner.

Last week, we reported that Johnson insulted Trump at a Libertarian Party debate.

“Donald Trump’s a pussy,” Johnson said at that debate.

While at the Conservative Political Action Conference, or CPAC, Johnson was asked about the insult by NowThis, an online news source, and admitted it was “kind of a misfire on my part” to insult Trump using that word.

He then went on to say it again twice.

“But the point was was that, you know what? I’ve climbed the highest mountains on each of the seven continents, I’m going to do a 3,000-mile mountain bike ride here, upcoming,” Johnson said. “Trump’s a pussy.”

“If it gets down to being in the presidential debates and he’s got anything to say about me, which I’m sure he will, I’ll just start off with the fact that he’s a pussy,” Johnson said, in what he might describe in the future as another misfire.

Johnson also denounced Trump’s plans to deport the estimated 11 million immigrants who are in the country illegally, building a fence on the Mexico border and killing family members of terrorists.

Johnson wasn’t the first presidential candidate to publicly use the word in this election cycle.

Early in February, a woman shouted something at Trump about U.S. Sen. Ted Cruz that many in the audience could not hear.

Vox described what came next.

“She said — I never expect to hear that from you again!,” [Trump] told the crowd, in mock disapproval. “She said: ‘He’s a pussy.’ That’s terrible.”

Johnson also discussed his candidacy in a more G-rated video from the news source.

In that video, he said his biggest surprise as governor of New Mexico, which he was for two terms, he “naively thought that Republicans would come together with Democrats when there was a good idea on either side, when in fact, they remained partisan. That common sense didn’t prevail.”

Johnson, at the time, was a Republican. He ran for president as a Republican candidate in 2012 but after failing to gain traction and only appearing in one televised debate, he dropped out and switched to the Libertarian Party.

He is perhaps most famous for his stance on legalizing marijuana. He called for the legalization of marijuana during his second term as governor.