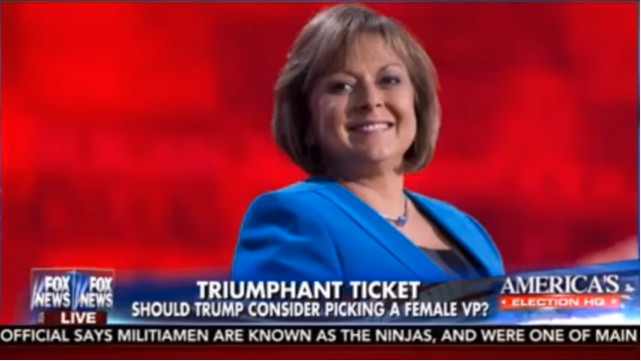 Susana Martinez in a screenshot from Fox News.

Once again, pundits are saying that Susana Martinez is a potential vice presidential pick for the eventual Republican nominee.

Susana Martinez in a screenshot from Fox News.

This time, it was Lee Carter of Maslanksy and Partners. Carter appeared on Fox and Friends to discuss possible choices to fill out the Republican presidential ticket that businessman Donald Trump.

She went on about the two governors’ experience.

The Hispanic Chamber of Commerce said earlier this year they want Susana Martinez to be the Republican pick for Vice President.

Martinez has said repeatedly over the years that she would not be on a presidential ticket. She cited her work as governor and the need to take care of her sister, Lettie, who has cerebral palsy.

She also condemned comments Trump made about Mexican immigrants when he launched his presidential campaign. Trump said that Mexico was sending rapists and drug dealers to the United States.

She called the comment “uncalled for” and “horrible things to say about anyone or any culture.”

Martinez endorsed Florida Senator Marco Rubio shortly before he dropped out of the race. Rubio mentioned Martinez as a possible vice presidential candidate.

Since Rubio dropped out, Martinez hasn’t endorsed another candidate.

Vice presidential candidates are also chosen at the delegation. Huffington Post wrote about the process earlier this week and noted that it is normally “little more than a procedural check mark.”

Presumably, if the convention settled on a candidate squarely on the first or second ballot, the delegates would defer to their candidate’s decision for a running mate. But if multiple ballots take place with no clear resolution, the backlash could spill over into the vote for the vice presidential nominee. One could for instance foresee a scenario in which Trump wins the nomination, but establishment forces push for a more palatable choice as their vice presidential nominee as a check against Trump’s candidacy in the general election.