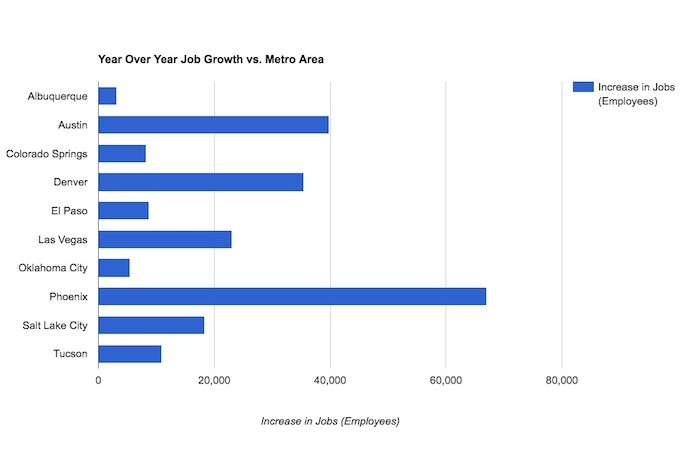 Austin had a 4.2 percent growth rate, in Phoenix it was 3.5 percent, and in El Paso it was 3 percent, according to data Wednesday from the U.S. Bureau of Labor Statistics.

Albuquerque and the Oklahoma City area tied for the lowest growth rates.

The good news for the Albuquerque area was that the job growth was widespread. Seven industry sectors gained jobs, and three lost them. And, 84 percent of the jobs gains were in the private sector. The construction sector grew by 2 percent, information was up by 3.8 percent and education and health care services increased by 3.9 percent.

The area’s jobless rate was 5.7 percent in February, down from 6.3 percent the year before. The number of people without jobs fell by 2,200, the BLS said.

Manufacturing continued its decades-long slide, shedding 400 jobs, or 2.4 percent of its workforce.

The other troubling news for the four-county Albuquerque metro area was that it has yet to recover all the jobs it lost during the recession. As of February, the area was still down 22,000 jobs from the peak of 401,500 jobs reached in December 2007. And, the area still doesn’t have as many jobs as it did 10 years ago. In February 2006, the area had 387,200 jobs, compared to 379,500 as of this February.