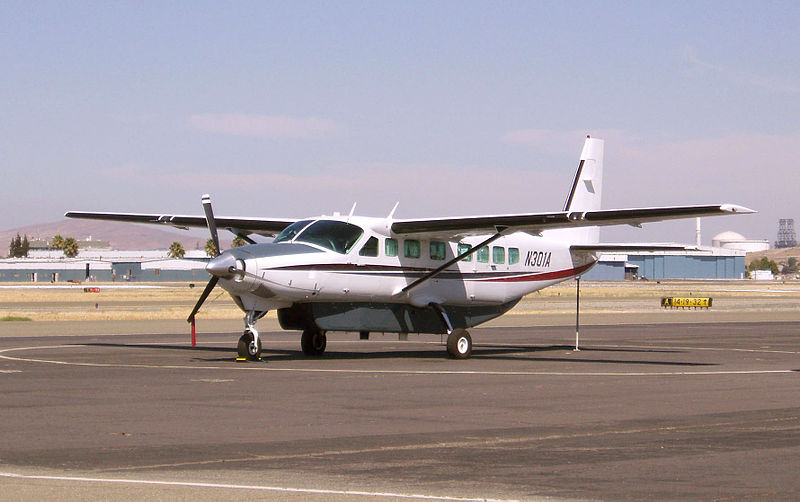 A Cessna 208B N301A, similar to the planes flown by the FBI. Photo Credit: Bill Larkin/Wikicommons

A Buzzfeed investigation found that the FBI and Department of Homeland Security flew spy planes over cities throughout the country—including Albuquerque.

A Cessna 208B N301A, similar to the planes flown by the FBI. Photo Credit: Bill Larkin/Wikicommons

The investigation found that the planes were equipped with high-resolution cameras and occasionally devices that could track cell phones below. The FBI preferred small aircraft, mostly Cessnas. Many were ”fitted with exhaust mufflers to reduce engine noise,” according to Buzzfeed.

The data on the flights themselves came from Flightradar24, a flight-tracking website.

What data the government planes collected and for what reason is still not known.

While FAA data shows flights over Albuquerque from planes known to be owned by the FBI, DHS flights were limited to a small area of southern New Mexico.

The flight data tracked flights from mid-August to December of 2015 and showed FBI planes circled different areas of the state’s largest city.

Buzzfeed notes that the data may not collect all planes owned and operated by the government.

Some two dozen planes operated by the FBI and more than 130 registered to the DHS never appeared on Flightradar24, suggesting that some surveillance planes may be hidden from public view on plane-tracking websites.

Nearly all of the FBI flights over Albuquerque took place east of the Rio Grande. The heaviest concentrations ranged from Paseo del Norte in the north to just northwest of the airport in the South.

The only other heavy concentrations of FBI flights in New Mexico, from the data obtained by Buzzfeed, appears to be flights to other cities, like Phoenix, Arizona or Los Angeles, California.

While there were not heavy concentrations of DHS flights in specific paths in New Mexico, flights occurred throughout the area where New Mexico, Texas and Mexico come together.

The DHS planes did not circle over specific locations in New Mexico, though did in other cities, such as Los Angeles.

The American Civil Liberties Union of New Mexico responded to the report in a statement to NM Political Report on Friday.

“The routine aerial surveillance of our communities by the FBI and other law enforcement agencies should be deep concern to any American who values their privacy,” ACLU-NM communications director Micah McCoy said. “It is especially chilling that the data reveals that law enforcement may be targeting communities based upon their religion or ethnicity. We need to impose rules, limits and regulations on aerial surveillance, both manned and unmanned, in order to preserve the privacy Americans have always expected and enjoyed.”

While the FBI cannot start investigations based on race, ethnicity or religion, Buzzfeed found that in some cases, the planes circled areas with heavy Muslim populations, such as “Little Kabul” in Fremont, California and “Little Mogadishu” in Minneapolis, Minnesota.

There was, however, no patterns of nationwide, widespread surveillance of mosques.

The Associated Press linked many planes to the FBI last year. This investigation built upon that data, which found more than 100 flights in 11 states in one month. The Buzzfeed investigation found 200 federal aircraft between the FBI and DHS that made more than 1,950 flights over the four-month period.