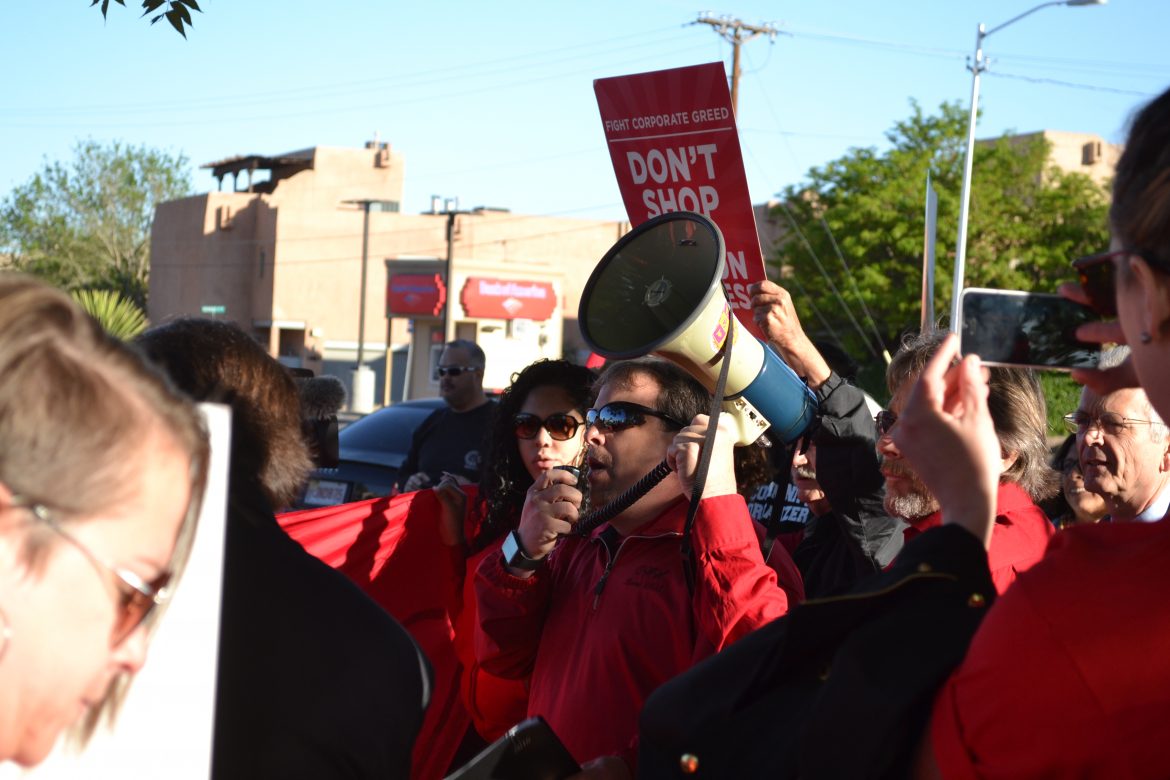 A demonstration outside of a Verizon shareholder’s meeting resulted in brief detainment and criminal citations for a group of union members and one New Mexico lawmaker.

Protesters outside a Verizon shareholders meeting in Albuquerque

Albuquerque police confirmed 15 protesters received citations, but said police made no arrests. These were just a portion of the hundreds of protesters who set up shop outside a Verizon shareholder’s meeting. Police also said there were no injuries at the peaceful protest.

The demonstrators, many of whom are members of the Communication Workers of America (CWA), were there to support Verizon workers on strike in the eastern part of the United States. The union criticized the company for outsourcing jobs and a reported attempt to force some technicians to work months away from home. The employees had reportedly been working without a contract since last August.

Tens of thousands of CWA members began striking against Verizon almost a month ago.

Bob Master, a CWA official from Manhattan, New York, was one of the demonstrators who was  detained after effectively shutting Rio Grande Boulevard by sitting in the middle of the street with a banner that read “Verizon: Good Jobs No Greed.” Master told NM Political Report his goal was to raise awareness through a peaceful protest.

“There’s a long history of civil disobedience as a tactic to bring attention to injustice,” Master said.  “That’s what we chose to do here today.”

Benavidez told NM Political Report he and others from SWOP took part in the protest because Verizon employees are “fighting a struggle” that he thinks “is emblematic of what’s going on with corporate America.” Benavidez said he finds it suspicious that Verizon would hold a shareholders meeting in New Mexico.

“It’s fascinating that Verizon chose Albuquerque to come to,” Benavidez said. “Far away from the east coast where they have 40,000 people striking.”

Protesters started gathering in front of the Hotel Albuquerque where Verizon shareholders were slated to meet at about 7:00 a.m. Within less than an hour later, the street was blocked off in both directions and a group of protesters were sitting in the road, holding a banner.

While the street was clear, organizers and supporters took to the megaphone.

“We’re standing on the shoulders of those who went before us,” said Fitz Boyce, a CWA member from New York. “Now this is our fight.”

About a dozen police vehicles gathered at one end of the street and officers began warning protesters that they were violating the law. After giving the group of protesters a five minute warning, police took them one by one to issue citations. The whole situation was resolved by 9:00 a.m.

National politics have also had a role in the Verizon protests. Both Hillary Clinton and Bernie Sanders weighed in recently and each spoken in support of Verizon workers. Clinton’s state organization announced earlier this week they would be at the protest in solidarity with the workers.

Trujillo said she was “not at all” worried about how her citation may affect her run in the upcoming primary election.