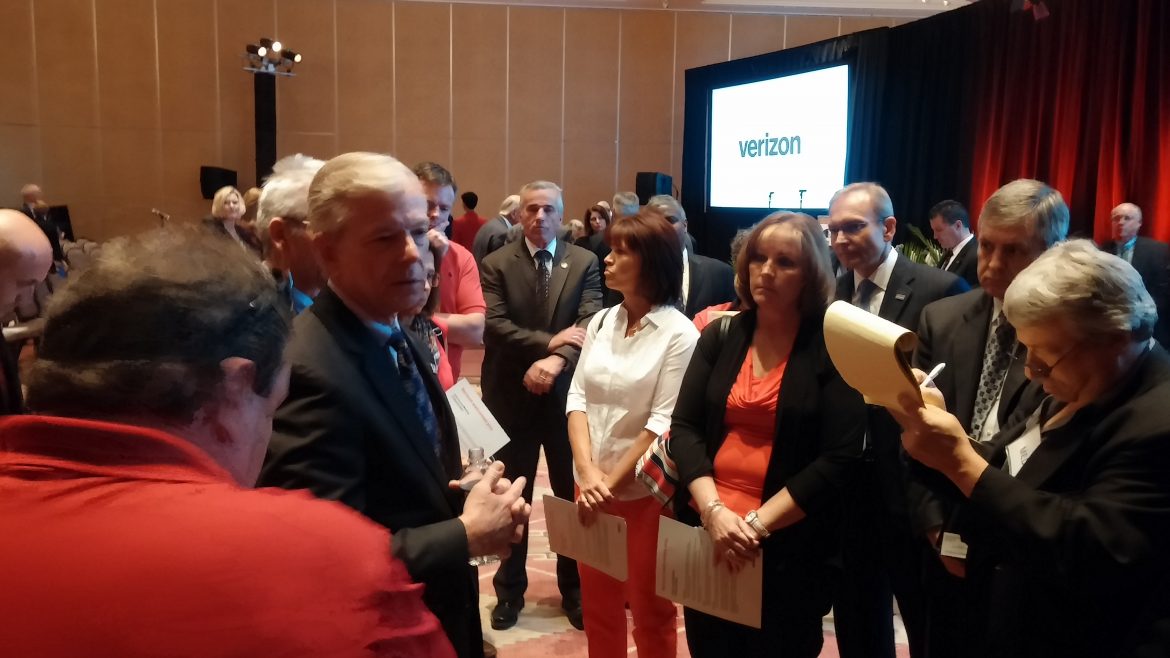 As Verizon CEO Lowell McAdam wrapped up the company’s annual shareholders’ meeting inside, he finally addressed the elephant in the room. Roughly 40,000 wireline company employees across the nation are into their fourth week of striking after coming to an impasse in negotiations with Verizon management over a new contract.

“While I won’t say a lot about the strike we’re experiencing today, I would like to thank the members of the union who are here today and your approach to this,” McAdam said, referring to Communication Workers of America employees in the room and picketing outside the hotel. “There is nothing we would like to do more than complete a contract either at the table or through mediation and get our employees and union members back to work.”

After he finished, a group of employees approached McAdams and spoke to him for roughly 10 minutes.

Michael Gendron, a field technician for Verizon from Hauppauge, New York and executive vice president at CWA Local 1108, said the most important issue in the impasse is over “workforce flexibility,” or management’s ability to move Verizon employees to work in other areas.

“We can’t have our people just being moved around like nomads,” Gendron told McAdam.

It’s an issue Dennis Dunn, a cable installer from Long Island, New York, also touched on. He told NM Political Report that Verizon’s proposed new contract would allow the company to move employees to work in any area within 100 miles at will.

“They want to be able to move us around whenever they want, however they want, and take us away from our homes,” Dunn said. “It’s basically a form of making us quit because we would be so miserable.”

McAdam, for his part, contended that management’s proposed contract doesn’t have “overnight movement” of employees or “permanent” movement of employees.

“It may not be the objective,” Gendron responded. “But if you leave the language in there, the management that you have will utilize it that way.”

According to the Nation, a progressive-leaning magazine, Verizon’s proposed contract would allow the company to move employees to different locations for up to two months at a time. The company also wants more authority to outsource jobs.

Verizon is doing well in the market—the Nation also reports that the company made $39 billion in profits over the past three years.

So far, the company has stayed with its hardline approach to negotiations. Last weekend Verizon cut off health insurance for the 40,000 striking workers.

“It’s been a little concerning to all of us that we have no medical benefits right now,” Monica Best, a Verizon line worker from Utica, New York, told McAdam. “You kind of walk around, tell your kids to be careful.”

McAdam blamed the union for the loss of health insurance.

“Without being too inflammatory, I would’ve hoped that would have been part of leadership’s decision when they decided to call a strike,” he said. “Again, we didn’t choose the strike. There’s only one group that decides to take people out.”

He added that “after 10 months of negotiations, we could put the number of proposals we put on the table vs the number the union had, and we put so many more on the table.”

“The thing we got to focus on now is how do we get this resolved,” McAdam said.

Jeannette Spoor, a retired line worker who worked for Verizon for 30 years, questioned McAdam why Verizon hadn’t given retirees a cost of living adjustment in pension payments in 25 years.

“You have nice little posters up here saying how much the company is making,” Spoor said, referring to McAdam’s presentation to the shareholders. “If we’re such a great company, how come you can’t help the people who helped to build that company by giving them a cost of living allowance?”

Verizon, Spoor lamented, “is too profitable” for this to happen. She told McAdam, who himself made $18 million last year alone mostly from company stock value, that it was “inexcusable” for him to not share his profits “with the people who made this company.”

“I appreciate your perspective,” McAdam said.