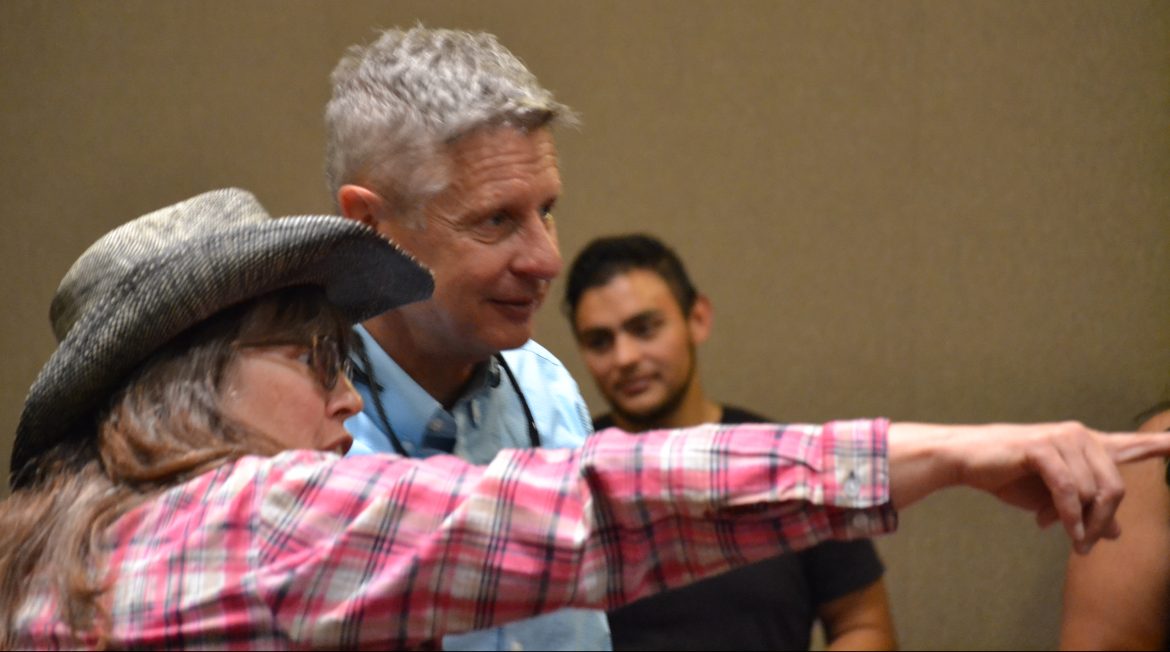 Gary Johnson at the University of New Mexico in April.

It didn’t work for Ted Cruz, but maybe it will work for Gary Johnson.

Gary Johnson at the University of New Mexico in April.

The former New Mexico governor announced on Monday who his running mate would be if he wins the Libertarian Party nomination next week at the party’s national convention in Orlando, Florida.

NM Political Report will be at the convention in Florida to report on Johnson and his attempt for a second consecutive nomination from the party.

Johnson’s choice is another fellow governor, Bill Weld. Weld was a two-term Republican governor of Massachusetts in the 1990s. Johnson served two-terms as New Mexico governor from 1995 to 2003.

Johnson confirmed the choice in an interview with the Associated Press.

Johnson told the AP it “brings an incredible amount of credibility” to his campaign and that Weld would be helpful in raising money for Johnson’s cash-strapped campaign. The AP reported that Weld fundraised for Republican candidate Mitt Romney in 2012.

Like Weld, Romney is a former two-term governor of Massachusetts.

The official announcement will come on Thursday, per Johnson.

Johnson has been on a wide-ranging media tour in recent weeks, with interviews with newspapers, magazines, podcasts and radio shows.

Johnson is perhaps the most well-known Libertarian seeking the nomination, but faces Austin Peterson, who founded The Libertarian Republic website, and John McAfee, who developed the anti-virus program that still bears his name.

Still, he isn’t a sure thing to win.

The Washington Post last week outlined the problems that Johnson could face getting the support of a majority of Libertarian delegates.

Unlike the major parties, the Libertarian Party does not have a primary. Instead, hundreds of unbound delegates from around the country will converge on Orlando, Florida to choose a candidate.

As Jeremy Stahl, the chairman of the national Libertarian Party, told Slate, “None of our delegates are bound in the way that the Republican or Democratic delegates would be. So everybody gets to vote their conscience. Basically, we’re all superdelegates.”

Whether Johnson’s gambit of choosing a vice presidential candidate will work is unclear; and he doesn’t really have the final say (neither do, technically, the Democratic or Republican candidates). Instead the same delegates will choose a running mate at the convention next week.

Johnson is part of a lawsuit against the Commission on Presidential Debates to remove that requirement.