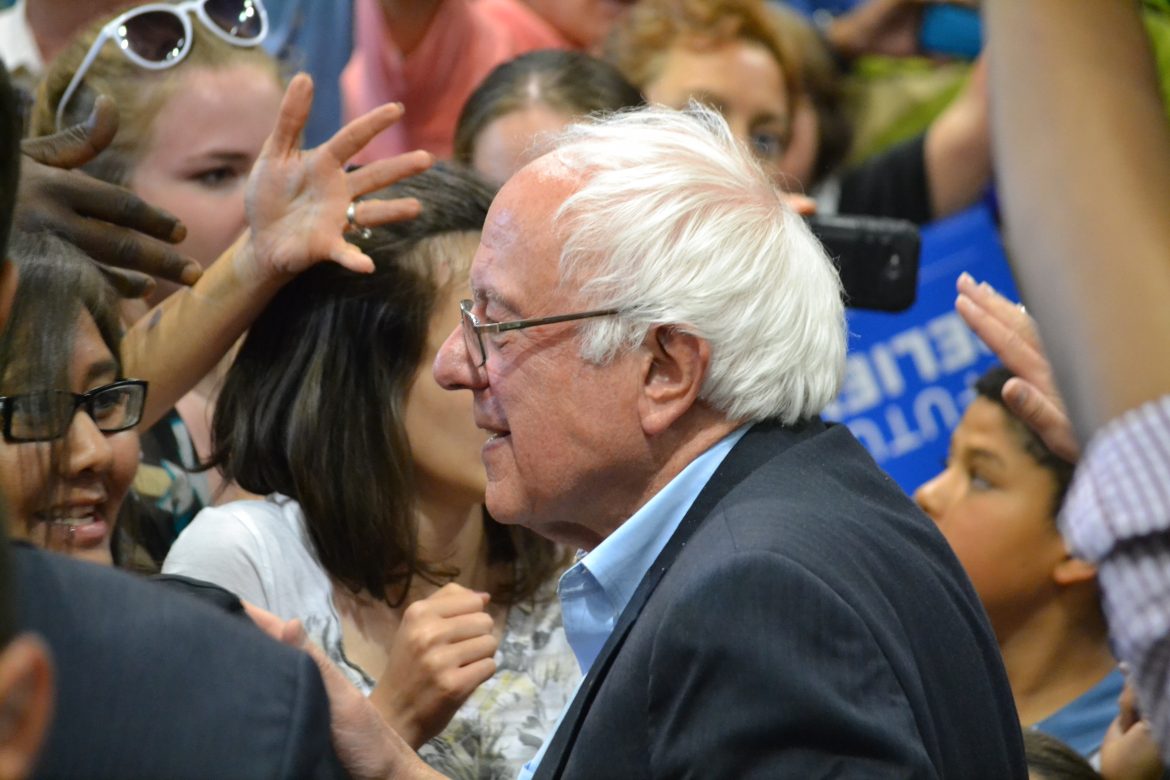 Bernie Sanders with supporters at a rally in Albuquerque

Bernie Sanders with supporters at a rally in Albuquerque

Sanders said that he is “in this fight until the last battle.”

Sanders currently trails former Secretary of State, U.S. Senator and First Lady Hillary Clinton by 760 delegates. He’s quick to point out that 525 of Clinton’s delegates are super-delegates who pledged support for her on their own and without voter approval, a process he called “kinda dumb” and “undemocratic.”

The Washington Post reported earlier this week that Sanders needs to win 67 percent of the remaining pledged delegates to take the lead.

In an interview with CNN earlier this week, Clinton called her delegate lead “insurmountable.”

“Just because Hillary Clinton said something doesn’t necessarily make it the case,” Sanders told NM Political Report in a short interview before the rally. “We are now at about 46 percent of the pledged delegates. There are six states that are coming up. If we do very well—and I acknowledge that it’s a steep climb—my hope is, especially with California, if we do really, really well, that we can end up with 50 percent plus one of the pledged delegates.”

Sanders continued his case against the Democratic Party establishment he and his supporters have increasingly lashed out against as the primaries continue at his Albuquerque rally Friday evening.

“Over 400 of these superdelegates declared their support to Secretary Clinton before anyone else was in the race,” he said, prompting the crowd to boo. “The is what the appointment process looks like, and it is a bad idea. It is a bad idea not only because it is undemocratic, but because it leads to a dangerous situation in the Democratic Party.”

“It looks to me like the people of Albuquerque realize it’s just too late for slot machine politics,” Sanders said.

He also took shots Wall Street for its “reckless behavior that has done much harm to this country.”

“A strong difference with Clinton and myself is we do not have and do not want a super PAC,” he told the crowd. “We have not asked and will not ask the billionaires for corporate money.”

“If you look at virtually all of the national polls and state polls done in the last six weeks, you will find that Bernie Sanders is a much stronger candidate to beat Donald Trump,” he said to cheers.

Sanders’ used the Walton family, the owners of Walmart and some of the richest people in the country, as an example of what he called “a rigged economy.”

Tax breaks for the rich, Sanders argued, amount to the federal government subsidizing people like the Waltons.

Sanders pledged to raise the federal minimum wage to $15 per hour to break this trend.

He maintained the country must “rethink the so-called War on Drugs” and vowed to remove marijuana from the federal Schedule 1 drug classification. He also acknowledged an addiction crisis with heroin and opiates.

“The most effective way to deal with that crisis is to recognize that substance abuse and addictions are not criminal issues but health issues,” he said to cheers.

Sanders also promised to push for mandatory paid family medical leave, Medicaid for all, the establishment of a large public works initiatives and free college for all.

Sanders’ visit marks the start of high-level presidential campaign activity in the state. Next week, Trump will hold a rally in the same Albuquerque Convention Center while former President Bill Clinton will stump for his wife in both the Duke City and Española.