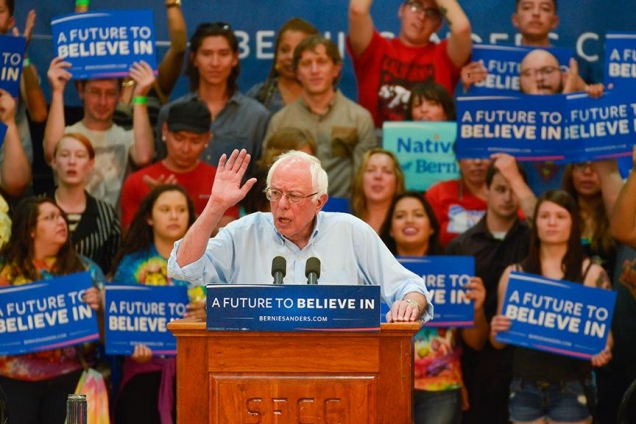 Early Friday morning, Lucas Jimenez sat on a concrete slab outside Santa Fe Community College, waiting to rally behind his presidential candidate, Bernie Sanders, the senator who has ridden a populist wave railing against big banks and the “corrupt” campaign finance system, and picking up 40 percent of Democratic delegates in the process (so far). Jiminez wore a gray t-shirt emblazoned with the now-famous image of Sanders as a young civil rights activist in 1963, getting dragged away by Chicago police.

It’s not unusual for Jimenez, 24, to be on campus at 8 am. He studies here full-time, working towards an associate’s degree in welding. Jimenez says his t-shirt symbolizes Sanders’ authenticity—“That he isn’t just talk. He’s real. He’s honest.”

His comments echo a common refrain among Sanders supporters, who view the candidate as an outsider, uncorrupted by moneyed interests. As the crowd grew through the day, SFR spoke with a number of Bernie followers who described the septuagenarian senator as “honest,” “genuine” or “a man of conviction,” a contrast to the establishment politics that Hillary Clinton represents. Several supporters called the former secretary of state a “liar.”

Still, Clinton has secured an almost insurmountable lead in the race for the Democratic nomination. The penultimate primary day comes up on June 7, when voters from California, New Jersey, New Mexico and  three other states check off their ballots. Despite trailing in delegates and the polls, the Sanders campaigned has vowed to fight till the end.

Sanders’ rally in Santa Fe was one of three scheduled in New Mexico this weekend. He was next planning on making a swing down to Albuquerque for dinnertime campaigning. And tomorrow morning, he’ll make a stop in the town of Vado before heading off to California.

Near Jimenez, a group of noticeably older supporters, decked out in New Mexico yellow, formed a circle at the entrance to the college’s fitness center. Paul Gibson, the campaign’s Santa Fe coordinator, rallied his volunteer corps, using words like “uphill climb” and “it’s not over.” When asked the average age of local volunteers, Gibson says, “Too old. Most of us are retired or semi-retired, so we have the time to do this.”

“I’m not retired!” interjects Joanna Corti, a doctor of oriental medicine, who woke up at 5 this morning to ship herbs to clients before rushing over to today’s rally.

Another nonretired volunteer, Jackson Miller, will be graduating from Santa Fe High School later this month before heading off to Stanford University in the fall.

“I just think his economic policy is the best for our country,” the teenager says. “It will redistribute wealth and help close the poverty gap. We should reach for the sky.” Clinton, in Miller’s eyes, has more experience than Sanders, especially in the realm of foreign policy. “But a lot of it is bad, like regime change and Obama’s drone program.”

(Note: Sanders also supports the limited use of military drones in counter-terrorism operations.)

A self-described ex-hippie named Cat Dancing sat on a lawn chair, eating penne pesto out of a tin can. Yesterday, she drove down from Tres Piedras with a friend, and spent the night at a motel in Albuquerque before returning to Santa Fe. “Even though he calls this a political revolution, it’s actually a spiritual revolution,” the 69-year-old woman says.

Two hours before Sanders was scheduled to speak, the sun beamed down hard, and the line of supporters gradually wrapped around the gymnasium building, stretching for the equivalent of about four or five blocks. A man in a black baseball cap walked among the crowd, announcing that no “vaping devices” or water bottles would be allowed in the building. Later, we saw the same man hawking “100% organic and GMO-free” campaign buttons.

A ragtag band of drummers and cowbell players sound a beat, while 18-year-old Jackson Miller leads the crowd in a chant: “Bernie! Bernie! Bernie!”

Four Highlands University students, who call themselves the Trippy Kitty Movement (“sponsored by the Catnip Coalition”), sported tie-die tops, fronted with what can only be described as a psychedelic swirl of feline faces. “I think Bernie would like them. He would wear them as pajamas,” says Mia Ramirez.

Another Trippy Kitty comrade, Dyna Amaya, tells SFR, “Honestly, Bernie Sanders reflects all the political causes I am for. Going against the 1 percent. I am a socialist democrat because I believe in creating an equitable society.”

“You go, girl!” a third friend, Lily Okoye, chimes in.

The doors opened at 1 pm, and the crowd shuffled inside the gymnasium, filling half a basketball court. The senator’s campaign reports that 2,849 people filled the room, while 600 supporters listened to Sanders’ speech outside.

A stay-at-home mom named Claudia Brookshire sat on a tarp with her 2-year-old daughter Hazel, who was coloring. As a singer belted out the national anthem, Claudia directed Hazel to place her right hand over her heart.

“I thought it would be a great experience for her,” Brookshire says. Before the 30-year-old had her daughter, she worked for the National Park Service, so the environment is one of her top issues. She’s also concerned about the centrality of money in political campaigns. “If you’re qualified and have experience, you should be able to run. You shouldn’t have to be a millionaire. You shouldn’t have to have a Super PAC.”

Organizers lead a diverse, young cohort onto bleachers directly behind a podium etched with the Zia symbol. We see all four members of the Trippy Kitty Movement back there, holding signs that say “A Future to Believe in” as anticipation builds.

After a brief and underwhelming introduction from the activist Jim Hightower, Sanders finally walked on stage with his wife, Jane, to roaring applause around 3:30 pm. “Thank you, New Mexico!” he called out.

During a wide-ranging speech that lasted over an hour, the senator hunched his signature hunch and gestured with gusto, characteristically waving his finger to accentuate his points. Before diving into the issues, Sanders celebrated the victories he’s claimed so far: 20 state primaries, 46 percent of pledged delegates, and more than 9 million votes.

“With a large turnout in New Mexico, we are going to win this state,” he continued, acknowledging that his path to the nomination is a “steep road.”

Interspersed with his usual stump lines on big banks, health care and the criminal justice system, Sanders played up issues that seemed to be specifically tailored to this state. He emphasized his support for tribal sovereignty.

“Everybody here knows, if you’ve studied five minutes of American history, that before this country became this country, the Native American people were lied to,” he said to applause. “And the treaties they signed were broken.”

Sanders also spoke directly to the Latino community, calling for greater protections for undocumented immigrants. “There are 11 million undocumented people in this country,” he said. “I wouldn’t be surprised if some of them are in this room right now.”

“In New Mexico, 30 percent of children are living in poverty, while millionaires and billionaires see their wealth increase every day,” Sanders said. “That is not what America is about.”

For the rest of Sanders’ speech, we took note of when his audience applauded, as well as when they booed.

And boos: the Koch brothers, Sheldon Adelson, Walmart, the “world of superdelegates,” the fact that the top one-tenth of 1 percent of Americans now owns almost as much wealth as the bottom 90 percent, offshore bank accounts, the US prison population (the highest in the world), opiate addiction, the Republican effort to cut Social Security, New Mexico’s childhood poverty rate (the highest in the nation), New Mexico’s high school graduation rate (the lowest in the nation) and Donald Trump’s “rhetoric of rounding up” 11 million undocumented Americans.

Sanders ended his speech with another call to action, pleading for supporters to get their family and friends to the polls. “Let New Mexico go on record as saying this beautiful state will help lead this country into the political revolution,” he concluded, before walking off stage to David Bowie’s “Starman.”


Everyone filed out of the gym.