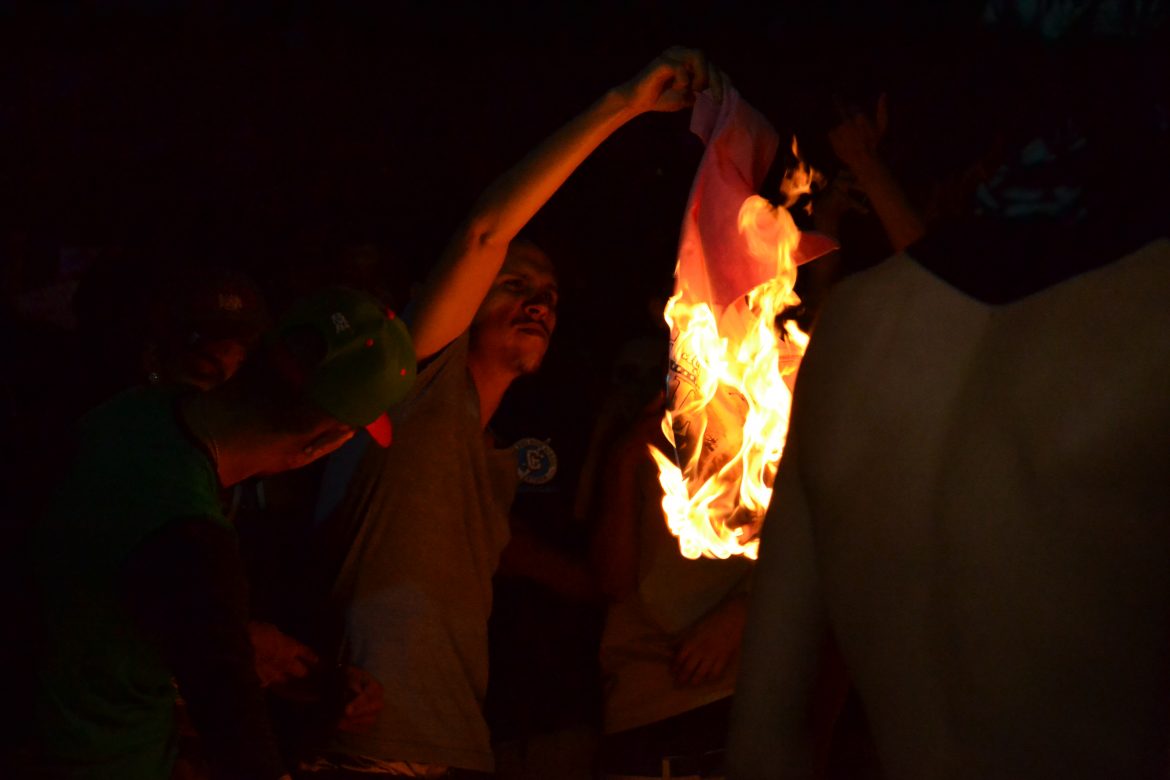 A protester burning a Donald Trump t-shirt outside the Albuquerque Convention Center.

A protest that started hours before Donald Trump appeared in Albuquerque ended with police and protesters facing off, police shooting tear gas and protesters throwing rocks at police lined up between them and the Albuquerque Convention Center.

A protester burning a Donald Trump t-shirt outside the Albuquerque Convention Center.

For the most part, protesters chanted slogans protesting Trump—at least until the sun started to go down.

Then, protesters streamed past the line set by police officers at 2nd and Tijeras, forced mounted police back and reached the second level of barriers. Peacekeepers from local community organizations lined up between the protesters and police, preserving the stalemate.

Then protesters broke past the last barrier and rushed to the locked doors of the Albuquerque Convention Center. They peered in, sometimes banging on the doors in an attempt to get inside.

Police in riot gear stepped outside and forced back protesters. Again, peacekeepers stepped between the police and the protesters.

And again, things largely remained stable for hours. And then protesters managed to nearly get into the convention center as the Trump rally inside ended. Mounted police rushed to get between protesters and the doors.

Albuquerque police stand between protesters and the Albuquerque Convention Center.

This began a cycle where some protesters threw objects at police officers, including a burning Donald Trump t-shirt and full plastic bottles of water. Police put out the fire, but stayed with a line of police behind barriers in front of mounted police until some protesters began to throw rocks. Then, police began advancing toward protesters, until protesters were on a sidewalk south of the Tijeras.

From there, the protests petered out at the convention center, but moved to Civic Plaza. Protesters blocked the streets at 3rd and Tijeras, surrounding two police cars. Seven people then jumped and ran on the cars, breaking the windshield on at least one of the cars; police only caught one of them before they ran down 3rd.

Police announced after the protests “at least one” person was arrested.

The tone turned almost party-like from there. Cars burned rubber, sending plumes of smoke into the sky. Passengers hung out windows and stood in the back of trucks while honking and chanting.

Protesters—a very different crowd from those who spent most of the day waving signs and chanting slogans behind barriers—then threw rocks, eggs and other objects at police while police fired back smoke canisters and pepper spray.

Police said on Twitter the “remaining contingent is only looking to cause trouble & be destructive.”

Police say several officers were being treated after being hit by rocks.

These parts of the protest made national news and were shown live on cable news channels.

The early hours of the protest were very different.

Protesters trickled in before 4:00, three hours before Trump was scheduled to appear.

Some burned sage in a ceremony and asked for there to be no hate, only love. Protesters held signs in the closed off road across from the Convention Center and chanted.

Protesters chanted and yelled “walk of shame” at Trump supporters as the former walked to the rally, just feet away. There were some shouting matches, but it was mostly protesters chanting slogans, from “Si se Puede!” to “Hey ho, hey ho, Trump has got to go!” to “Fuck Donald Trump!”

The protesters took to the streets for the first time—peacefully.

A police officer on a bike led the way and consulted with the peacekeepers who walked with the march through two circuits downtown. A man with a trumpet played music to cheers, protesters chanted and snarled traffic.

Still, there was little to show what the protests would become later.