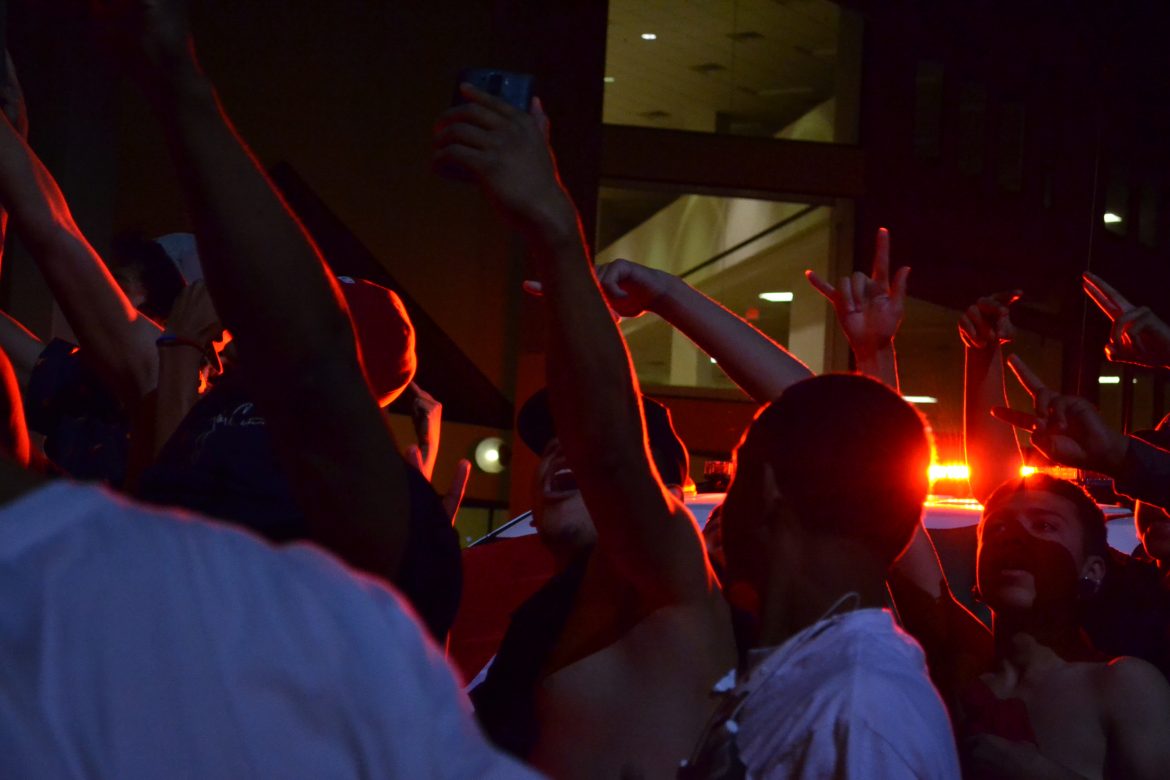 Protesters take selfies next to a police SUV shortly before jumping on the SUV and running across it and another police car.

The once-peaceful protests turned violent as the day turned to night and the family atmosphere turned more threatening.

Smoke fills the air after a Donald Trump rally as protesters clash with police.

An Albuquerque Police Department spokeswoman said “Six officers suffered significant injuries after being pummeled with fist-sized rocks.” All six were treated on the scene, and suffered injuries “to their faces, noses, arms and legs.” No officers were transported to the hospital for these injuries.

One Sergeant was treated for smoke inhalation, which police blame on fires lit by the protesters.

APD announced one Bernalillo County Sheriff’s Deputy was injured, though it isn’t clear to what extent. APD did not have totals for Rio Rancho Police Department or New Mexico State Police who sustained injuries.

Two of the arrests were of juveniles, who the Albuquerque Police Department cited and released to their parents.

One of the arrests of the adults was Tylina Hardy, a 30 year old arrested in the rally for disorderly conduct and obstructing.

The lone arrest, so far, outside the rally was Jose Cuevas, a 19-year old arrested and charged with disorderly contest.

A police spokeswoman said that “about a dozen other individuals” inside the arena were detained and escorted out of the arena.

The Associated Press reported Wednesday that some of those involved in the violent protests “openly admitted that they set out to cause a disruption.”

More from the Associated Press:

By nightfall, the family atmosphere gave way to protesters with tattoos of the Sureños 13 gang, a loosely organized collection of Latino gangs that pay tribute to the Mexican mafia.

The protesters eventually charged the convention center doors just as people from the Trump rally were being directed to leave through a detour. Some of them warned rally attendees to be careful since the gang “ran these streets.”

“The freedom to support the candidate of your choice and to protest is a sacred first amendment right granted to all Americans,” Albuquerque Mayor Richard Berry said in a statement. “When civil  protests are interrupted by those who turn to violence, we are fortunate to have our first responders there to protect our community and all those who participate in our American democracy.”

“These organizations this evening devolved from community action groups to hate groups by every usual measure,” Lewis wrote on Facebook. “This was not a protest—it was a riot that was the result of a mob trying to cause damage and injury to public property and innocent citizens exercising their constitutional right to peaceably assemble.”

“And let me be clear, the violence that erupted last night, was not the result of peaceful protests by local community action groups, but rather was the result of incitement by a small but organized group of trouble makers whose sole intent was to act out,” Sanchez said. “Local protestors did their best to maintain order, but when they withdrew, those with violent intent took over.”

Javier Martinez, the president of SWOP, also attended the rally—he was one of those detained and escorted out of the rally, though not arrested.

SWOP also responded to the violence in a statement.

To our dismay and surprise local police departments and the secret service seemed to stage the controversial event to provoke confrontation between protesters and rally attendees. Community members against hate were penned in the middle of the street with no shade, and bottlenecked rally attendees to walk down a path down the side of the pen.

On multiple occasions the peacekeeping team organized out of these efforts diffused situations that could have led to more serious confrontations, particularly when local police departments failed to provide security for peaceful, lawful demonstration and rally attendees.

* ProgressNow New Mexico helps find funding for NM Political Report. The group has no input or editorial control over this or any other story.