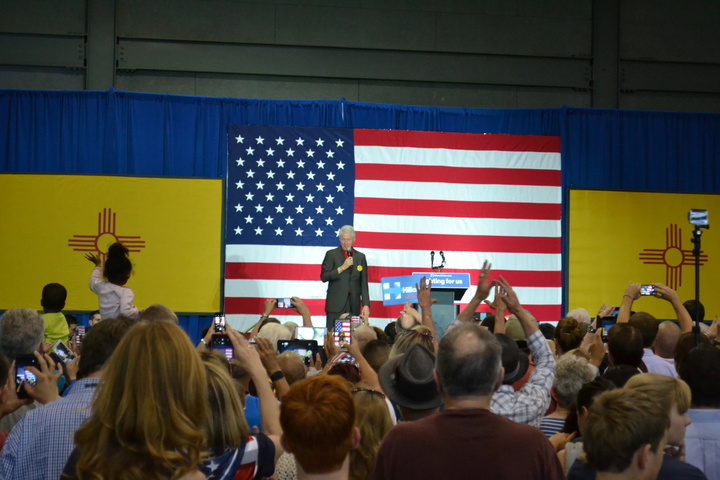 Speaking for just over 40 minutes, Clinton portrayed Hillary Clinton as an antidote to divisiveness in American and world politics.

“We are living in a fascinating time that is full of both promise and peril,” Bill Clinton said. “Both progress and pain. And what you see all over the world today, all these arguments we’re having. Do we want bridges or walls? Do we believe we can grow together or are just going to fight over a smaller and smaller pot? All these things are going on right now in different parts of the world.”

Clinton argued that his wife, a former Secretary of State who is the favorite to win the Democratic Party nomination for president against U.S. Sen. Bernie Sanders of Vermont, believes the “we can grow together, but only if we live together, and that will make us strong together.”

He said she would “restore the middle class, increase upper mobility, decrease inequality, so that we can all rise together.”

Early into the speech, a person from the crowd shouted at Clinton to talk about personal debt and trade issues. Eventually, he addressed one of them, going into a multi-pronged plan to address college debt.

The plan includes giving $23,500 in tax free money to pay off loans for people who do two years of Americorps service and one year of additional community work.

“You can work at a drug treatment facility, or be a social worker, or a police office or a firefighter or a teacher,” Clinton said of examples of what would qualify for the one additional year after Americorps. “Anything like that.”

He also said Hillary Clinton supports a plan capping debt payments to “no more than 10 percent of their taxed income, flat fee” for a total of 20 years. If all of the debt isn’t paid off within 20 years, Clinton said, it would be forgiven.

For women, people of color and LGBT people, Clinton argued that the past “wasn’t so great.”

“But, better in many places in America for white working class Americans without a college degree,” Clinton said. “And the thing that has hurt the Democrats, is that they think we don’t care about them anymore than the Republicans do. And that is not true.”

Clinton promised that his wife would “dedicate a fixed amount of money” to revitalize depressed, rural economies like those of West Virginia, which faces impacts from reduced coal production.

He also brought up the similarities of his home state Arkansas, which he called a “poor, rural state” and New Mexico. Growing up, he said many people in Arkansas actually moved to New Mexico for better opportunities.

“I spent a dozen years as governor trying to change that,” he said.