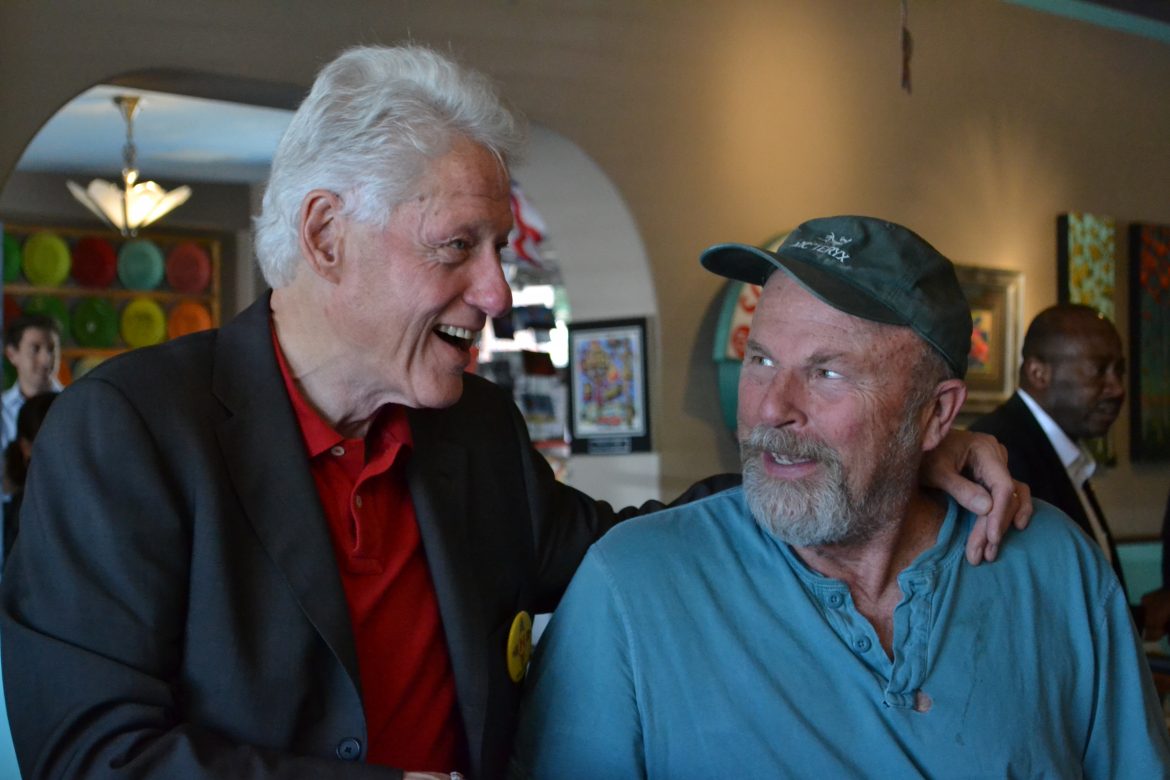 Former President Bill Clinton makes a surprise appearance at The Range in Albuquerque.

BERNALILLO — Bill Clinton made his second unscheduled campaign stop of Wednesday at The Range Cafe in Bernalillo.

Former President Bill Clinton makes a surprise appearance at The Range in Albuquerque.

Clinton arrived and worked the room taking selfies, shaking hands, and even discussing cigars with one patron.

The former president was campaigning on behalf of his wife, Hillary Clinton, as she competes with Bernie Sanders for the Democratic nomination. New Mexico’s primary election day is June 7.

Earlier in the day, Bill Clinton appeared at Tia Sofia’s in Santa Fe. The staff at The Range did not know Bill Clinton would be appearing.

Unlike in Santa Fe, Bill Clinton did not get into a discussion on policy. Dozens of restaurant-goers and workers flocked to the former President.

One was Dewon Darden. Darden, originally from Louisiana, said he goes to The Range a couple of times a month.

The former U.S. Marine shook hands with Clinton and told NM Political Report that he is a Clinton supporter and said it was “super humbling” to meet Clinton.

“I certainly like him a lot better than Donald Trump,” he said.

Another patron, James, said he rarely goes to The Range and went on a whim.

Bill Clinton signed one of the plates at The Range to hang on the wall, as do other public figures and celebrities. He scanned the plates and picked out plates signed by his friends, actors Ted Danson and Mary Steenburgen.

He also noted the plates by President Barack Obama and U.S. Sen. Martin Heinrich. Obama’s plate is denoted marked apart by a small American flag next to it.

The staff at The Range drew a “H” Hillary Clinton logo on the plate and Bill Clinton signed it, “H is for Hillary and Home on the Range.”

The staff at the Range also presented Bill Clinton with t-shirts and other souvenirs from the gift shop.

Like at Tia Sofia’s Clinton went into the kitchen and took pictures with the staff.

Bill Clinton ignored questions from the press, though when one member asked how he would stay focused on policies in the light of Donald Trump’s personal attacks, he ignored the question for a few seconds while signing an autograph.

Then he answered that it would have to wait until the end of the primary, which he said he thinks Hillary Clinton will win.

First Lady Michelle Obama is scheduled to appear at a commencement ceremony at Santa Fe Indian School this week; so far, she has no scheduled political stops.

Hillary Clinton has not appeared in New Mexico this year.