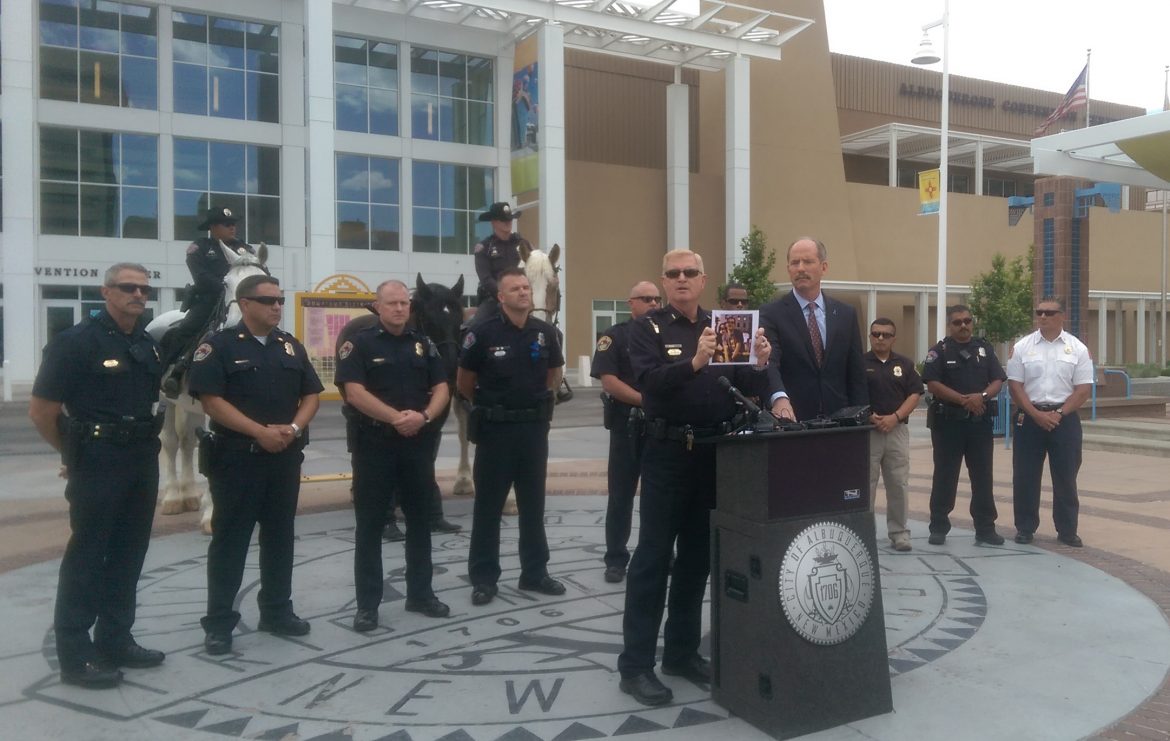 APD police chief Gorden Eden holds up a picture of what police say was one of around 30 violent protesters.

Out of the about 1,000 protesters who showed up to demonstrate against Donald Trump, fewer than 30 were those who perpetrated violence.

APD police chief Gorden Eden holds up a picture of what police say was one of around 30 violent protesters.

That was what Albuquerque Mayor Richard Berry and Albuquerque Police Department Chief Gorden Eden told media in a press conference on Thursday afternoon, two days after a once-peaceful protest against the presumptive Republican nominee turned violent.

Note: This story may be updated.

Eden said that protesters carried rocks and other projectiles in backpacks and threw them at officers. He said every officer who was on the front line was hit with at least one rock. He said at least one rock was the size of a cantaloupe, while many were fist-sized.

“The six hundred thousand people who live in this great city don’t have to apologize for 30 thugs,” Berry said.

Eden said he had a message for those who threw rocks or hit police officers: “We don’t know who you are, but we’ll find out who you are.”

Berry is offering up to $10,000 from his Mayoral contingency fund for information that will lead to the arrest of any perpetrators who committed violence. He said that reward money would be broken down to $1,000 per arrest.

Police provided media with three photos of what they said were two protesters who initiated violence against police.

Both Berry and Eden told reporters that they “hadn’t been briefed” on whether the smaller number of protesters who used violence that night also marched in the earlier, peaceful protest against Trump during the day.

Both Berry and Eden took time to address the health of horses. Eden said that he received emails and letters from around the world on the horses.

One horse, when protesters walked past the police cars that served as barriers, stumbled to the ground.

Eden said the horses were hit with rocks, and one horse was hit with a metal rod.

Berry said that unlike humans, the horses did not choose to be there or to voice their opinions.

“We have the ability to communicate as humans,” he said. “Horses don’t.”

“That’s why you saw what you saw,” he said, referring to the “restraint” by police officers that Berry praised repeatedly through the press conference.

Berry said they would be reviewing everything on the APD response that night, including the placement of protesters. Trump supporters who parked downtown were forced to walk through a “gauntlet,” as some called it, of protesters on each side.

Eden said police “did have a path setup so that would not happen” but that some protesters moved through the barricades.

The path through protesters took place before the protesters breached the barricades, from early in the afternoon.

Eden said that organizers called police and said they could no longer control the crowd, when the protest turned violent.

“They have lost their ground,” Eden said.

NM Political Report spoke to George Luján, the Communications Organizer at the Southwest Organizing Project before the press conference.

Luján said they have been receiving “hate calls” throughout the day. Albuquerque City Council President Dan Lewis and the Republican Party of New Mexico blamed the groups for the violent protests.

“I would totally question the staging of the entire event,” Luján said, referring to the close quarters between Trump supporters and protesters.

“Police essentially pitted two sides against each other and then stood back,” he said.

Luján noted that SWOP members were acting as peacekeepers including forming a wall between protesters and mounted police and police in riot gear.

“Just looking at that image, I can’t imagine APD looks at that image and thinks ‘that’s what we want to be,'” he said.

As for Lewis, Luján said he is “utterly out of touch with the community he claims to represent.”

When asked by a reporter, Berry declined to specifically weigh in on the flap between Trump and Susana Martinez.

“I’ll tell you, I like my governor,” Berry said.

Berry also said he would not be endorsing in the presidential race. Berry, like Martinez and Trump, is a Republican.

More on the event

Eden said much of the planning depends on the venue of the event.

Berry said that the police presence cost around $39,000 in overtime for officers and other city personnel and that there was about another $10,000 in property damage to the city, the most expensive of which was damage to windows at the Albuquerque Convention Center. Berry said business owners also reported property damage, which he said would be addressed later this week.