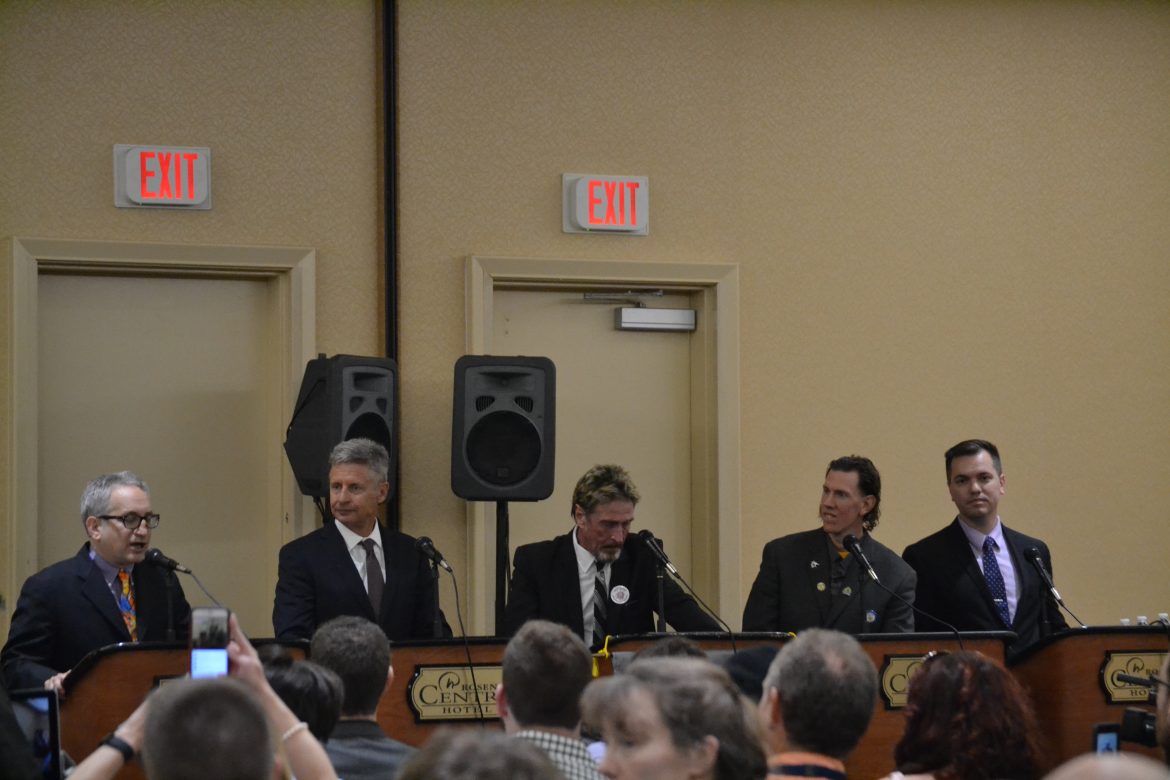 ORLANDO — Former New Mexico Gov. Gary Johnson won the first round of debates at the National Libertarian Convention on Thursday. After a multi-tiered process that lasted most of the evening, 34 percent of the delegates said they favored Johnson.

The process involved multiple debates with the winner moving on to the next round. In the final round Johnson was joined by software anti-virus mogul John McAfee, media entrepreneur Austin Petersen, radio host Darryl Perry and Dr. Marc Feldman.

Note: NM Political Report reporter Andy Lyman is in Orlando to follow former New Mexico Gov. Gary Johnson and his attempt for a second consecutive nomination from the party. He will be filing updates throughout the weekend.

Johnson mostly stuck to his usual speaking points, telling delegates if he is nominated he will bring the Libertarian Party to the forefront on the national stage.

“We’re on the verge of breaking through to becoming a major party,” Johnson said.

Petersen, who received 24 percent of the vote after the debate, focused on his pledge to focus on Libertarian values and ideals.

“I want to stand for what is right,” Petersen said.

McAfee, who was followed around by a film crew for most of the day and during the debate seemed much more candid and cynical of pushing for a Libertarian presidential candidate.

“This is a fucking fraud,” McAfee said.

Later, when asked how he would find success in the possible failure of winning the nomination, McAfee said that Libertarians should focus less on the the White House and more on local offices.

“We can do this, but not by being president,” McAfee said.

Perry, through his answers, encouraged delegates to vote for a candidate who stands on more traditional Libertarian ideas. Throughout the debate, Perry continued to push a hypothetical question and answer.

“Should the government? No,” Perry asked and answered.

In another hypothetical, Perry said, “Freedom is the answer, what’s the question?”

Feldman, for his part used humor, which he said represents power, to get his points across.

In regards to a question about what he wanted to be remembered for if he had a presidential library dedicated to him, he replied simply, “President Feldman didn’t suck.”

Johnson faced criticism from the other candidates and even the audience when the topic of his preferred running mate, former Massachusetts Governor Bill Weld came up.

Johnson called Weld “original libertarian” and was answered with audible shock from the audience along with a numbers of boos.

Weld, who has spoken highly of both Hillary Clinton and John Kasich is not particularly favored in Libertarian circles.

Randy McGlenn, a delegate from Spokane, Washington told NM Political Report he was concerned about Weld and asked Johnson who his second choice for vice president would be.

“I wanted to hear from his perspective,” McGlenn said. I want the lib party to win.”

Technically, Weld and the other vice president candidates are running separately from the presidential candidates, so Johnson could win the nomination while Weld loses. Still, Johnson isn’t ready to count Weld out yet.

“To me, there’s one guy up there that’s head and shoulders above the rest,” Johnson told NM Political Report.