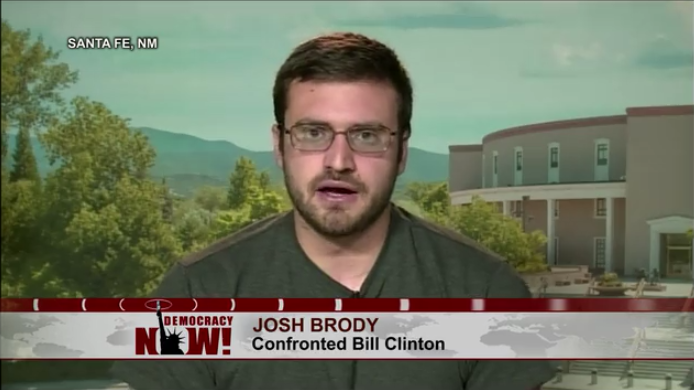 The Bernie Sanders supporter who slowed down a Bill Clinton surprise meet and greet in Santa Fe is getting his fifteen minutes of fame.

The story went viral after Buzzfeed recounted some of the conversation. Much of the conversation was inaudible to reporters. NM Political Report was one of three local outlets to follow Clinton at two unscheduled campaign stops last week.

Josh Brody was at Tia Sophia’s while Clinton walked through the diner. After speaking briefly to a half-dozen or so tables, including one with former Santa Fe mayor Sam Pick, Clinton hit a roadblock at Brody’s table and he debated Brody over Clinton’s economic record.

The 24-year old graduate of The New School said he was visiting his parents who lived minutes away from the eatery off Santa Fe Plaza.

He accused Clinton of “racially coded” arguments when talking about the Personal Responsibility and Work Opportunity Act.

“He kept invoking a ‘culture of dependency’ argument, similar to what you will hear anyone from Ronald Reagan talk about, when he discusses the mythical welfare queen, to Paul Ryan, when he talks about dependency in our inner cities,” Brody said of Clinton. “It’s a racially coded argument, and he was blowing into that dog whistle very hard.”

“Democracy Now!” wasn’t the only left-of-the-center outlet to notice Brody’s debate with the former president.

Socialist magazine Jacobin told Brody if he contacted them, he would receive a free lifetime subscription.

“Bill Clinton essentially ripped the heart out of the Democratic Party and abandoned that notion that the government can make the lives of its people better and should invest in a robust social safety net,” Brody said. “So that’s how the discussion started. It went many other places.”

He said that Hillary Clinton deserves some of the blame because of “she was known for the transformative role of the first lady.” He also disagreed with her votes in the Senate.

Brody said that he would likely vote for the Green Party candidate for president, though that may change.

“I plan to vote for Jill Stein, because I believe New Mexico will win by double digits,” he said. “However, if the race does seem close, unfortunately, I will have to vote for [Clinton], which is not something I’m happy about.”