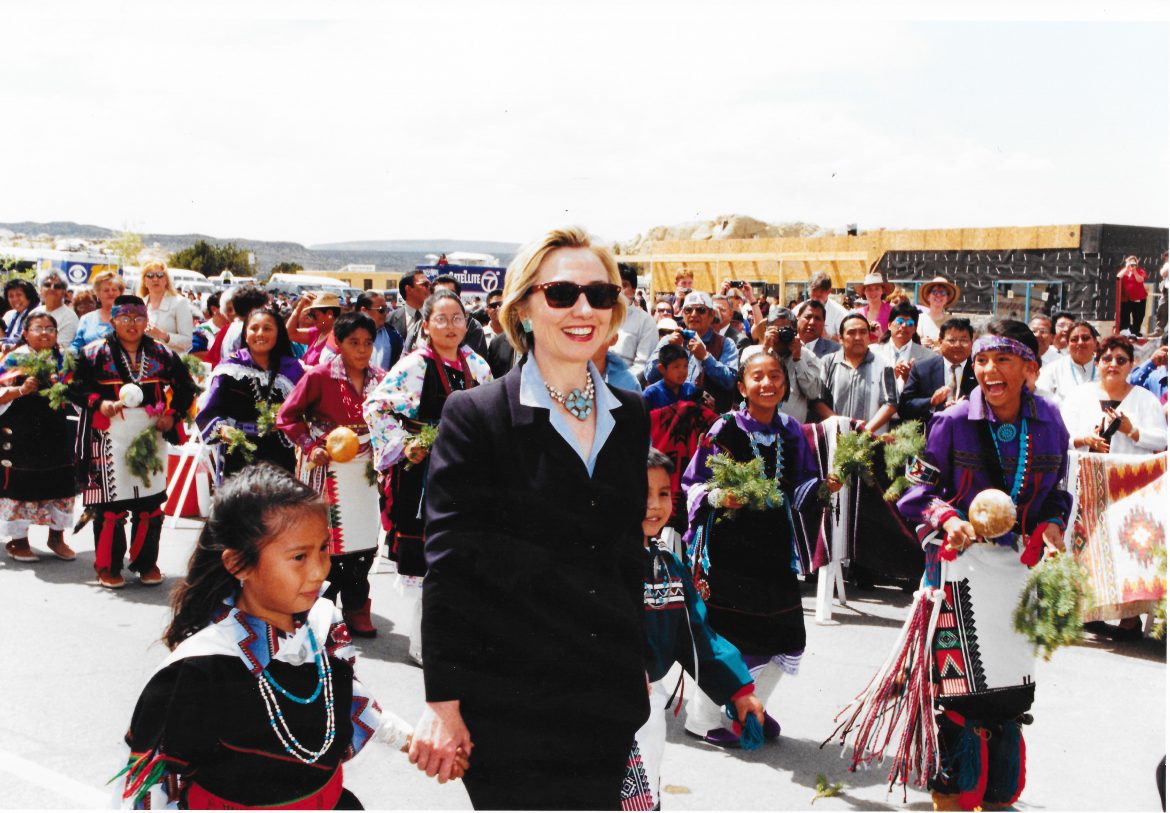 It was a big deal. Hillary Clinton, the First Lady of the United States of America, had accepted an invitation from the Pueblo of Acoma to visit our ancestral homeland and to meet our people. Her visit, which had been in the works for more than a year, was included as part of a tour to highlight historical treasures in the South West, such as Mesa Verde and the Governor’s Palace in Santa Fe. In coming to Acoma, she would see not only a spectacular landscape and ancient dwellings, some nearly a thousand years old, but also a 380-year old Spanish mission and, most significantly, a vibrant and living Pueblo culture.

In the days and weeks before her visit, White House advance teams came through the Pueblo, giving me an insight into the careful planning that goes into travel by members of the First Family. Everybody was very friendly … and also very serious!

I was to meet the First Lady in Santa Fe at the home of the designer of the Sacagawea dollar coin. Before our meeting, I asked my wife, “How do you speak to such an important person? What is the right way to address the First Lady?” When we approached her, I introduced my wife and said “How are you, Mrs. Clinton?” She responded warmly, “Just call me Hillary.” Her welcoming manner put me at ease.

Hillary arrived at Acoma looking great in a cowboy hat and turquoise jewelry. One of the first things we did was tour Acoma Sky City, our ancestral mesa-top village. She saw the San Esteban del Reyn Mission, built in the 1600’s. A number of Acoma potters presented her with exquisite gifts of hand-coiled pottery and one of our dance groups performed for her.

But most memorable may have been when she met Concepcion Faustine, one of Acoma’s oldest and most beloved members. At that time, Concepcion was over 90 and was one of a handful of people who lived year-round on the mesa-top.  Hillary and Concepcion embraced, with Concepcion giving a gentle kiss to Hillary’s cheek. In their embrace you could see two women, coming from very different worlds, bonding in a moment of love and appreciation for each other. It was beautiful.

At the foot of the mesa, nearly a thousand Native people waited for Hillary to speak. But first, she was greeted by the Acoma Dancers—a dance group made up of 3 and 4 year olds! Hillary is known for her long years of advocacy for children and families, but that is a very serious way to describe her love of kids. When she danced with the eagle dancers, you could see in her smile and laughter the delight she took in the love, energy and enthusiasm of our children.

Addressing the crowd, Hillary talked about the importance of preserving and protecting Native culture, “After all, at the time of the first millennium, you were the only Americans here…And when we talk about saving America’s treasures, we have to begin by saving the first Americans’ treasures.” She went on to display a real understanding of our culture, “I know how deeply those of you who live here feel about your community … I could see it as I visited the school and saw the children learning their native pueblo language. I could see it as I toured the old pueblo and visited the mission…I know that living in the oldest continuous inhabited community in the entire United States is a great privilege.”

I’m writing this piece because I want everyone to know that long before she became a senator, and long before she became secretary of state and long before she ran for president, Hillary cared about Native peoples and Indian Country. During her visit in 1999, I saw all the sides of Hillary come together – the loving person, the playful child, and the thoughtful adult who knows that we are here just for a time, that we are obligated to care for each other and that we must do our best to pass down what we were taught to a new generation. I am glad Hillary is running for President. Hillary is a good person. She possesses a deep understanding of and respect for Native peoples, our cultures and our important place in America’s history and future. I believe she will make a great president!