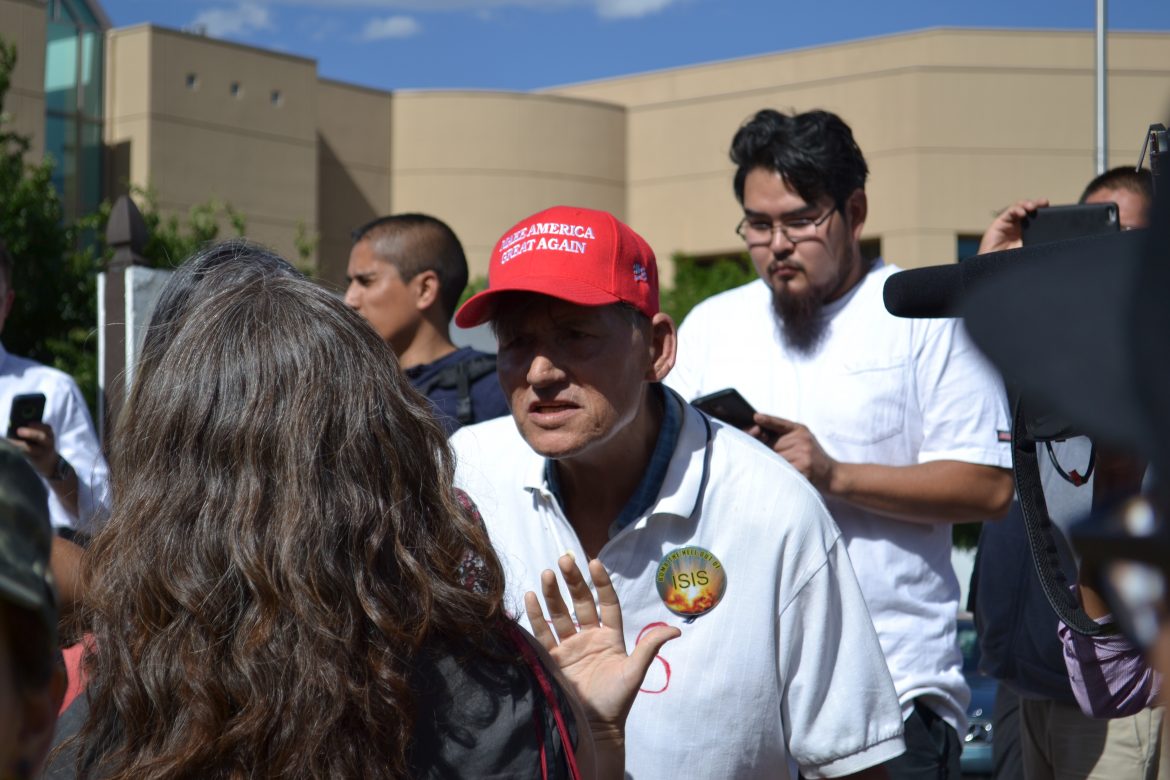 A Donald Trump supporter with a "Make America Great Again" hat argues with an anti-Trump protester.

A top city official’s assertion that police had to to put Donald Trump supporters and anti-Trump protesters just a few feet from each other is wrong, the ACLU says.

A Donald Trump supporter with a “Make America Great Again” hat argues with an anti-Trump protester.

And the ACLU’s national website says that “police are permitted to keep two antagonistic groups separated” when it comes to public protests.

But Mayor Richard Berry’s Chief of Staff, Gilbert Montaño, apparently didn’t know that on Monday when he told an Albuquerque Journal reporter just the opposite.

According to the Journal’s story, “Montaño said police determined it would be against the law to force Trump supporters and protesters into separate areas. Previous case law, he said, calls for them to have the ‘ability to be right next to each other.”

But Peter Simonson, executive director of the ACLU of New Mexico, said case law doesn’t restrict police departments as much as Montaño claimed.

“The important point is that the protesters be approximate enough that they can communicate their message effectively,” Simonson told ABQ Free Press. “I’m not aware of a requirement that they be put in immediate contact with the target of their communication. Government does have the flexibility to exercise time and place and manner restrictions for the purpose of protecting public safety.”

Sometime during the Trump rally, the protest outside of the convention center turned violent. People threw rocks at police officers and lit t-shirts on fire. APD said six officers were injured and that at least 150 were hit with rocks during the riot.

Albuquerque City Councilor Patrick Davis*, who helped organize the protest, said he had asked that the event be held on Civic Plaza, away from the east wing of the convention center were the Trump rally was held. But the plaza was apparently being used by another group that day and city officials put the protesters on Second Street and Tijeras near the entrance to convention center’s east wing.

Mayoral spokeswoman Rhiannon Samuel did not immediately return a phone call from ABQ Free Press asking for comment on Simon’s remarks and an interview with Montaño.

Simonson said that protesters have to be near enough to the groups or event they are challenging so they can be seen and heard. “That is the main and only test,” he said. “Clearly that can be accomplished without putting them within arms reach of each other.”