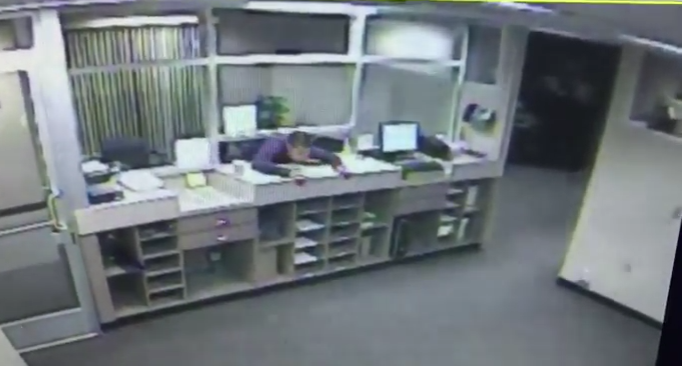 An Albuquerque Police Department spokesman told reporters Monday night that the lockdown of Albuquerque City Hall amid reports of a possible active shooter and hostage situation appeared to be from “a really bad game of telephone” and he couldn’t rule out it being a prank.

It was just becoming clear at the time that no actual shooter existed.

A day later, as more information became available, it looks like it all came because of Daniel Olguin.

Video, embedded below, shows Olguin slipped through a small opening to get into the Albuquerque City Treasurer’s Office. Olguin originally tried to get in through a locked door.

From there, police say Olguin yelled that an active shooter was in the building. Two employees heard him.

The two employees barricaded themselves and one called 911.

“We have someone yelling out in the building outside our door saying there’s a shooter,” the employee, who identified herself as Rachel, said to police. She said she did not hear any gunshots.

They were unable to lock the interior door, though barricaded it to stop Olguin from entering the room. They described the ordeal while on the nearly-45 minute line with 911.

The other employee described how Olguin slid through the window.

Olguin himself called 911 shortly after the phone call by the employee, himself reporting “we’re getting shot at, please hurry up.”

A third 911 phone call reported gunshots, but a police spokesman said APD determined this was the sounds of police themselves “gaining entry into hallways, in order to get to perceived victims.”

Eventually, police arrested Olguin for breaking and entering and two counts of false imprisonment. Both are felonies.

Olguin currently has no criminal record.