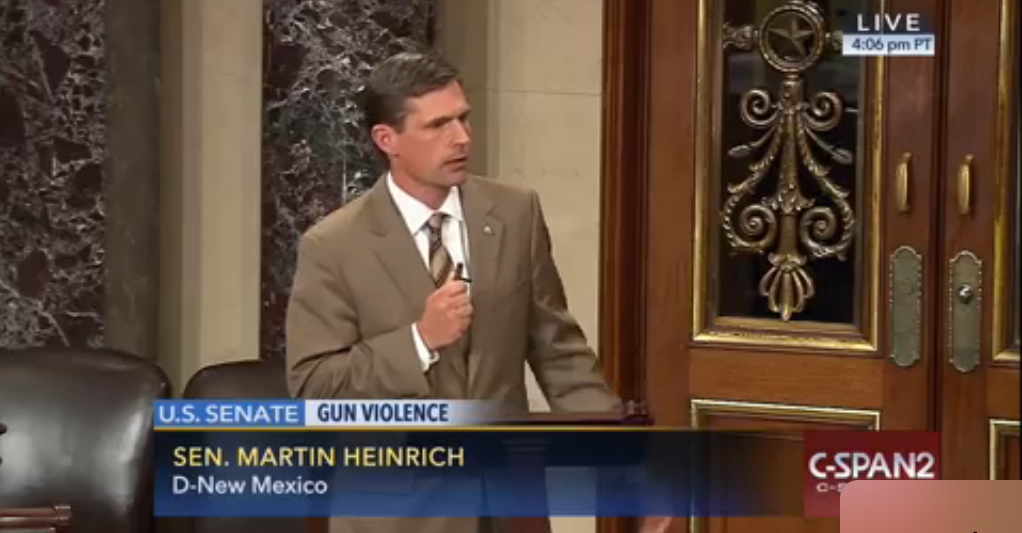 Update 5:30 pm: Heinrich spoke for roughly 20 minutes, mainly focusing on how as a gun owner himself, he can’t understand why the proposed reforms are controversial.

“The fact that we’re arguing about this is unfathomable,” Heinrich said. “I can’t tell you how many times I have been through the background check process.”

He also said he was proud of the many candlelight vigils that happened in New Mexico in response to the Orlando shootings.

Heinrich asked Murphy whether his proposals include due process measures for people who feel wrongly listed on the federal Terrorist Watch List to contest their status. Murphy replied in the affirmative.

“This is about separating the law abiding from the terrorists and criminals,” Heinrich said. “So what could be more common sense?”

He added that he read the proposed reforms “though the lens of what it means to be a law-abiding gun-owning American.”

Murphy contended that his proposals were not controversial in “American living rooms” or even gun clubs.

“It’s only controversial in the U.S. Congress,” Murphy said.

Update 5 pm: Udall spoke for a few minutes, evoking not just the Orlando massacre but a recent tragedy in Roswell, where a man shot and killed his wife and children.

“There’s so many tragedies and they all have different reasons,” Udall said on the floor. “The one thing that almost all of us agree on is that we must do more to keep dangerous weapons out of the hans of people who mean to do harm on other people or themselves.”

Udall asked Murphy how his legislation would prevent mass shootings like these, to which Murphy responded with the beef of his proposal—people on the federal Terrorist Watch List would be barred from buying firearms.

Murphy also explained that his bill would expand background check enforcements to “the places where gun sales are migrated, which is largely gun shows and internet sales.”

Udall then brought up how many New Mexicans live in rural areas where “carrying a gun isn’t unusual.”

“I understand why many New Mexicans feel safer carrying a firearm,” Udall said. “They might be miles from the closest help, it might take law enforcement a significant amount of time to reach them, so I certainly don’t want to do anything to infringe on their right to protect themselves with a firearm.”

U.S. Sens. Martin Heinrich and Tom Udall, both Democrats from New Mexico, are scheduled to take the Senate floor at the end of the afternoon to join in a filibuster.

Senate Democrats began the filibuster earlier today, around 11:30 am ET (9:30am MT), pressing for a vote on a bill to prevent people on the federal Terrorist Watch List from being able to purchase firearms. It started when Sen. Chris Murphy interrupted debate on an appropriations bill.

Both Heinrich and Udall support the gun control legislation.

Murphy represents Connecticut, the scene of the 2012 Sandy Hook Elementary School shooting. Earlier in the day he stated that he intended to remain on the Senate floor “for as long as I can.”

According to Senate rules, Senators may yield to allow colleagues to ask questions without yielding the floor to end debate.  Many Democrats have since intervened for extended question periods, giving Murphy breaks through his filibuster.

Watch the ongoing debate live via this C-SPAN feed page.

NM Political Report will update this story as the situation develops.

You can watch the archive of the entire day, including a search of transcripts of speakers, here.