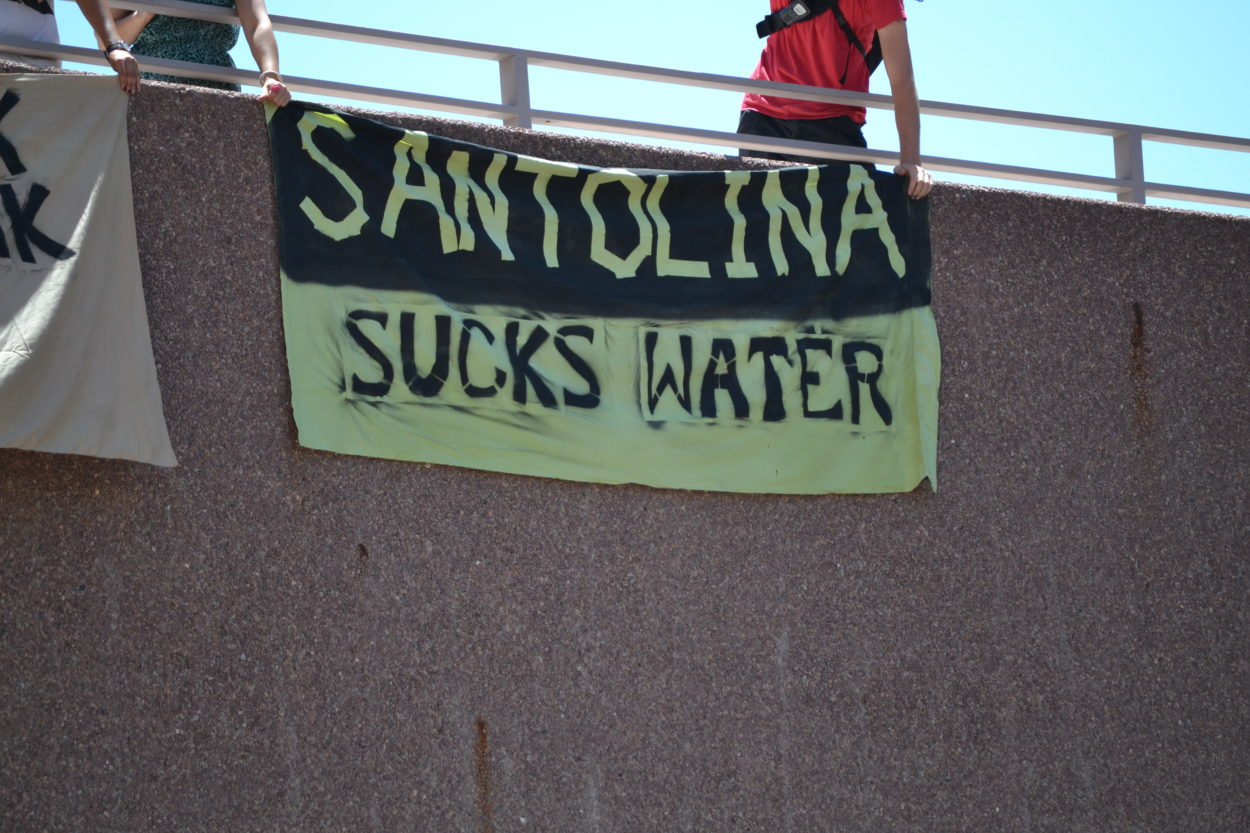 It’s just one sentence – 19 words – but its disappearance from a proposed 100-year plan to manage the Albuquerque Metro area’s water supply has critics saying its omission could dramatically draw down the aquifer in future years.

The critics also charge it’s part of a plan by water insiders and consultants to flip Bernalillo County’s water strategy without any real public input and that it will work to the benefit of the proposed Santolina master-planned community on Albuquerque’s far West Side.

The change is to the Albuquerque Bernalillo County Water Utility Authority’s Water Resources Management Strategy, which was last updated in 2007. The current version of the strategy’s Policy B says, “The Authority shall limit the use of ground water except to meet peak demands or during times of drought.”

But that sentence is missing from the water authority’s proposed revised strategy, which could be approved by the utility’s board of directors later this summer.

Here’s the meaning of the proposed change:

According to water expert Elaine Hebard, who is also a member of the water utility’s Technical Customer Advisory Committee and is a Santolina opponent, the presence of the 19-word sentence in the current strategy mandates the authority to use its surface water, known as San Juan-Chama water that flows in the Rio Grande, to meet most of the Metro area’s drinking water needs and to pump from the aquifer only when absolutely necessary.

“It changes it [the policy] from focusing on using surface water, which is our most renewable supply, to relying more on the groundwater system,” Hebard said. “But why are we changing?”

Norm Gaume, the former water resources manager for the City of Albuquerque, said the proposed change flips the previous strategy on its head. Instead of relying primarily on surface water, the Metro area is going back to the bad old days of pumping groundwater, he said.

“It no longer minimizes it [groundwater pumping] but uses it all the time,” Gaume said. “It doesn’t make sense.”

Gaume said he thinks the proposed strategy would allow the water authority to get water to the proposed – and controversial – 14,000-acre Santolina project on the far West Mesa. “It allows them to serve Santolina without any changes to their water system,” Gaume said.

Bernalillo County Commissioner Debbie O’Malley, who sits on the water utility’s board, said the utility is beginning to look at renewed growth in the area. And if that means Santolina, that’s part of the agency’s mission, she said.

“The water utility is basically a business, and its main thing is to provide water,” O’Malley said. “So they are starting to prepare for likely growth. They are not in the business of denying people water. Their business is to provide water for the future, and it doesn’t say just for people who live here now.”

John Stomp, chief operating officer of the water utility, said the proposed strategy represents long-range planning that will keep the aquifer from falling below a dangerous level and protects it for future generations.

No other western city or state is engaged in such long-term planning, he said. If the water table drops to 110 feet below its original point, the utility would be forced to find new sources of water, Stomp said.

“The idea that we are changing the groundwater management plan is true,” Stomp said. “Except for that, we’re actually going to be more conservative. Because in the past, the previous strategy was to only pump during droughts or for peak supplies. But that doesn’t say what happens when the aquifer gets to a certain level. It’s just, keep pumping.

“What we are proposing is not being done anywhere else in the country. We’re talking about a plan where we can draw down the aquifer to a certain point, and that’s it, we need to bring on new supplies. We are saying that we are going to manage this aquifer at this level forever.”

Work on the new strategy began 17 months ago, but Hebard and Gaume, who helped develop the first water resources strategy back in the 1990s, said there has been little community input for a project that purports to set the course of Albuquerque’s water policy for the next 100 years.

There were at least two public meetings earlier this year that, in total, drew fewer than 50 people. Four more meetings have been scheduled, including a July 22 meeting in Albuquerque.

“We will have a town hall meeting, but by then the policy will already be written. Where is the public involvement?” Hebard said.

The first meeting was set for June 16 at Don Newton/Taylor Ranch Community Center, 5900 Kachina St. NW. There are three more meetings, one in June and two in July.

Stomp said the public really doesn’t get involved in such big policy changes early on, and especially now when there is no immediate crisis.

“I would argue that the public doesn’t care until you get to a certain point,” Stomp said. “If you say the aquifer is rising and everything is all right, no one will come. You don’t want to engage the public so early on that they don’t care.”

One thing that is clear is that Metro area residents have done a tremendous job of conserving water over the years, and the aquifer has been rising since 2009 when the San Juan-Chama drinking water project became operational, Stomp said. That project allows Albuquerque to use water flowing into the Rio Grande from the San Juan River Basin in Colorado.

It means that residents and businesses are using much less water on landscaping and other things that cause water to evaporate or be otherwise lost. An acre-foot – the amount of water that will cover an acre of flat ground to a depth of one foot – equates to 325,851 gallons.

View all Albuquerque West Side articles →