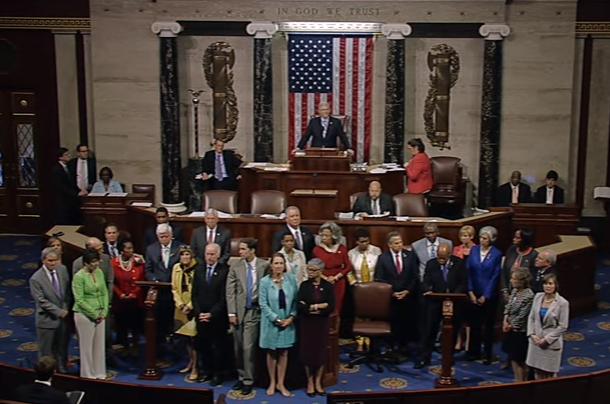 Screenshot of John Lewis speaking, calling for new gun legislation, on the House floor before a sit-in on June 22, 2016.

Two of New Mexico’s U.S. Representatives are part of a sit-in by Democrats demanding a vote on legislation related to guns.

Screenshot of John Lewis speaking, calling for new gun legislation, on the House floor before a sit-in on June 22, 2016.

The legislation would bar those who are on terrorist watch lists from buying guns.

U.S. Sen. Martin Heinrich is one of the cosponsors of the bipartisan “no fly, no buy” legislation.

The Collins-Heinrich bill targets those on the “no-fly” list. It also would flag potential gun buyers who are on a secondary security screening list that prompts extra scrutiny when those people try to fly. Those two lists of people – totaling about 110,000 names – make up a much smaller group of potentially dangerous individuals than those targeted in the failed Democratic-backed legislation, which could have prohibited approximately 1 million people on the government’s full terror watch list from buying guns.

The U.S. Senate voted on four pieces of legislation related to guns earlier this week. None passed.

“I am honored and proud to join my colleague, Rep. John Lewis, in the well of the House to demand action on gun violence,” Lujan Grisham wrote on Facebook.

She then quoted Lewis.

“We can no longer wait. We can no longer be patient. So today we come to the well of the House to dramatize the need for action. Not next month. Not next year. But now, today! Sometimes you have to do something out of the ordinary. Sometimes you need to make a way out of no way. We have been too quiet for too long. There comes a time when you have to say something, when you have to make a little noise. You have to move your feet. This is the time. Now is the time to get in the way. The time to act is now. We will be silent no more. The time for silence is over.”

A spokesman for Luján confirmed that he is on the floor as well.

“While I am disappointed with the lack of action in the House and Senate on common-sense legislation to curb gun violence, I am encouraged by the willingness of colleagues who are interested in a bipartisan solution,” Lujan Grisham said in a statement. “We must explore all options. Until we do that, I call on Speaker Ryan to not recess the House until he allows a vote on gun violence prevention legislation to keep the American people safe.”

The House in recess, so the C-SPAN cameras are not on. C-SPAN cannot start using the cameras in the chambers on their own.

The Senate votes earlier this week came after a filibuster, one that both U.S. Senators took part in.

U.S. Sen. Tom Udall is supportive of the sit-in. The former member of the House tweeted a photo of himself with Luján.

U.S. Sen. Martin Heinrich is also on board.

Update: Hours into the sit-in, Lujan issued a statement.

“Despite the fact that Speaker Ryan has turned off the cameras and the microphones, I will stand with my colleagues to call for a vote on commonsense legislation that keeps guns out of the hands of those on the FBI Terrorist Watch List. A moment of silence on the House floor is simply not enough to honor the lives of those we have lost. We need action to keep guns out of the hands of suspected terrorists and it begins with a vote right here on the House floor.

“According to a CNN poll 85 percent of Americans support this legislation. It’s even higher among Republicans at 90 percent.”

Correction: This piece originally said Rep. John Lewis was a Republican. He is a Democrat.