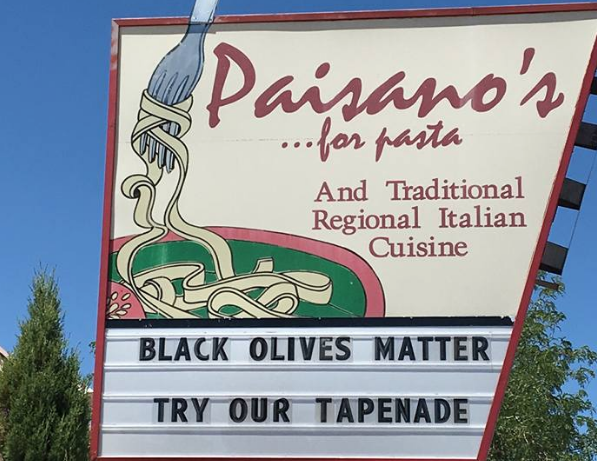 One week after police shootings and death of two black men in Louisiana and Minnesota rocked the country and led to nationwide protests, an Albuquerque restaurant wrote “Black Olives Matter” on its outdoor sign to promote its weekly special.

The message is a not-so-subtle reference to the Black Lives Matter movement that began in 2013, following the acquittal of George Zimmerman in the controversial killing of Trayvon Martin. The loosely-organized movement has focused on killings of African-Americans, including shootings by police.

Paisano’s, an Italian eatery located in a northeast neighborhood on the Eubank Boulevard and Indian School Road intersection, also wrote “try our tapenade” below “Black Olives Matter” and posted the message on its Facebook page Wednesday.

Tapenade is a spread made primarily from olives.

As of 11:30 am Thursday, the restaurant had taken the sign down and deleted the Facebook post. Paisano’s owner Rick Camuglia said he removed the sign “by popular demand” after “a lot of interesting response to it.”

But he still defended the message as “cute” and part of the restaurant’s routine “play on words” and “punny messages.” He denied that the sign was meant to be offensive and said, “it seems like something offends everybody in our world today.”

“When you make a black olive tapenade, the olives matter,” Camuglia said in an interview. “You can’t make it with canned olives.”

“Too bad that’s not funny because black lives are not inanimate olives,” Bellamy said in an interview. “Obviously their marketing team is not trying to get black people to come in for business.”

Harold Bailey, president of the Albuquerque branch of the NAACP, said he applauded Paisano’s decision to take the sign down.

“The unjustified killing of innocent black men or any group is nothing to joke about,” Bailey said.

Young Women United Executive Director Tannia Esparza wrote a statement praising Black Lives Matter as “one of the most transformative movements” during a time when “black communities are in a constant state of fear, loss and mourning.”

“Paisano’s attempt at ‘humor’ is thoughtless and literally based on profiting from tragedies many of our loved ones don’t survive,” Esparza said in an email.

Javier Benavidez, executive director of the Southwest Organizing Project, which advocates for low-income communities of color, said in an email that the sign is “definitely insensitive to the trauma experienced by so many who’ve been witness as of late to the extrajudicial state violence against and dehumanization of black lives.”

“The experience of police brutality is especially raw in Albuquerque and trivializes the devastation that mass criminalization and incarceration have had on so many of our communities,” Benavidez added.

Albuquerque police have been a part of more than 50 shootings with civilians since 2010. The police violence led the federal Department of Justice to issue a scathing report in 2013 concluding that Albuquerque police had violated the constitutional rights by using “excessive force.”

For the last two years, the Albuquerque Police Department has been under an agreement with the government to reform its use of force practices.

When asked if he could see how the sign is offensive, Camuglia said, “I guess.”

“It seems like I could have put, ‘meatball sandwich with cheese’ and vegans would be offended by the fact that we served meat,” he said.