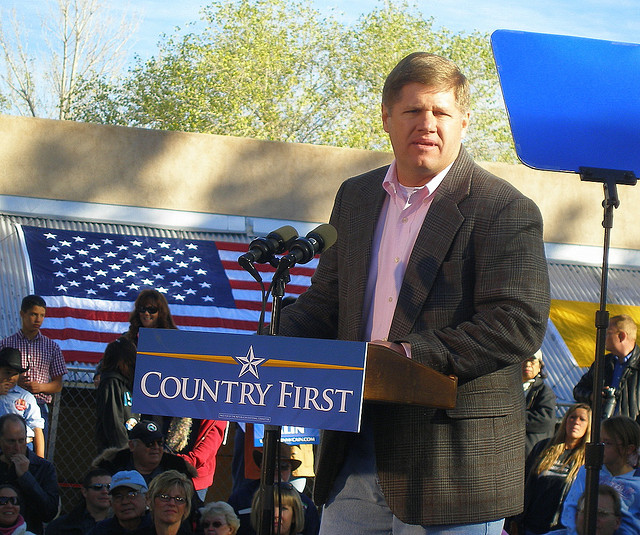 Darren White resigned from Gary Johnson’s administration over the then-governor’s push for marijuana legalization. Now, White thinks that Johnson should be the next president.

Last Thursday, just before the end of the Republican National Convention, White took to Twitter to announce his support for Johnson.

In ’04, I was RNC delegate. This year I can’t back the GOP. And I’m not alone. For me, I’m going w/ @GovGaryJohnson. pic.twitter.com/olmS6pbIMj

White told NM Political Report that distancing himself from the GOP this year was a “very difficult decision.”

“At the end of the day, I am going to vote for the future of the nation,” White said on Monday.

Johnson said it was “great” that he got White’s support.

“I think the endorsement by him implies he is on board with recreational marijuana.” Johnson told NM Political Report in a text message. “Not sure if that is the case.”

“Oh yeah, I’m on board with it,” White told NM Political Report with the caveat that he wants it to be done in a thoughtful and cautious manner.

White served as the state secretary of the Department of Public Safety under Johnson’s administration. After his resignation, White would go on to run for Congress as a Republican.

He also served under Albuquerque Mayor Richard Berry as the city’s chief public safety officer. Berry is a Republican, though Albuquerque municipal elections are officially non-partisan.

More recently, White announced his role in Purlife, a medical marijuana company in New Mexico. The move that prompted Johnson to label White a hypocrite.

White publicly distanced himself from Johnson when White resigned as secretary of the Department of Public Safety after Johnson spoke in favor of legalizing marijuana in 1999.
Johnson told NM Political Report that he is ready to move past the pair’s previous disagreements.

“I hate to use this term,” Johnson said in a phone interview. “But I forgive him.”

White said any differences they had in the past are minor compared to what’s at stake.
“We’re talking about the presidency,” White said. “It’s a hell of a lot bigger than any disagreement Gary and I had in the past.”

White is not the only one who seems to be moving away from the Republican Party and toward Johnson. Johnson has continually described himself and the Libertarian Party, the political party that he’s currently running for office under, as fiscally conservative and socially liberal.

Republican delegates from Utah told a reporter at the RNC that they were dissatisfied with Republican nominee Donald Trump and would consider voting for Johnson.

White’s endorsement is notable because New Mexican Republicans have largely endorsed Trump or have stayed silent on the issue. Gov. Susana Martinez, who White has often defended in the past, stopped short of publicly endorsing Trump but was present on the RNC convention floor when the New Mexico delegation pledged their support for Trump.

Johnson acknowledged that it’s unlikely that any other high profile Republicans in New Mexico will steer away from their party.

“Even former elected officials going against the party — it’s a toughie,” Johnson said.

White said he respects those who truly support Trump, but he suspects there are others who don’t and just haven’t made it public.

“If that helps some people come forward, that’s great,” White said of his public endorsement.

White had a plethora of praises for Johnson, calling him “principled,” “honest” and “genuine.”

“Gary will work every single day to make sure the country succeeds,” White said.

When asked why he decided to go public with his endorsement of Johnson instead of keeping his vote to himself, he told NM Political Report, “That’s not my style.”