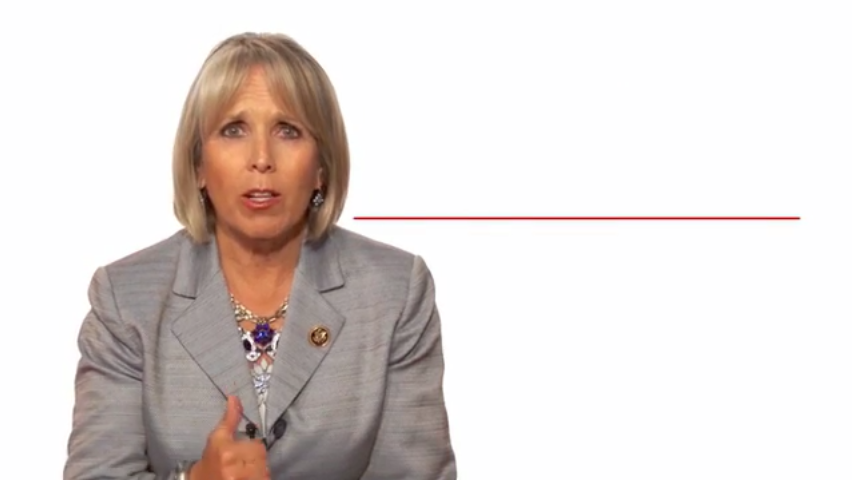 Screenshot of Michelle Lujan Grisham in video that aired at the 2016 Democratic National Convention.

Lujan Grisham’s appearance came as part of a video for the Congressional Hispanic Caucus, which aired in the afternoon before the primetime speeches by national figures like U.S. Sen. Bernie Sanders, U.S. Sen. Elizabeth Warren and First Lady Michelle Obama.

Update: Lujan Grisham announced on her Facebook page that she will speak Wednesday at the DNC.

In her brief appearance, Lujan Grisham spoke about why she supported Hillary Clinton for president.

“I know Hillary to be a fighter, somebody who gets things done,” Lujan Grisham said.

She also appeared onstage with other members of the CHC, though she did not speak.

The early parts of Monday were marked by Bernie Sanders supporters booing the mention of Clinton.

Sanders sent a text message to delegates asking them not to boo; he later sent an email. The Sanders whip in New Mexico did not pass on that text message to Sanders supporters, according to media reports.

Sanders NM whip says he chose not to pass along to delegates Sanders' text calling for calm: "I am looking the other way."

The Santa Fe New Mexican reported at least three Sanders supporters say they will not vote for Clinton.

U.S. Rep. Ben Ray Lujan is scheduled to speak Wednesday, in his capacity as chair of the Democratic Congressional Campaign Committee. He will be joined onstage by Democratic candidates for office.

Last week at the Republican nomination, Gov. Susana Martinez appeared in a video for the Republican Governors Association, the group which she chairs. Martinez did not speak onstage during the convention.