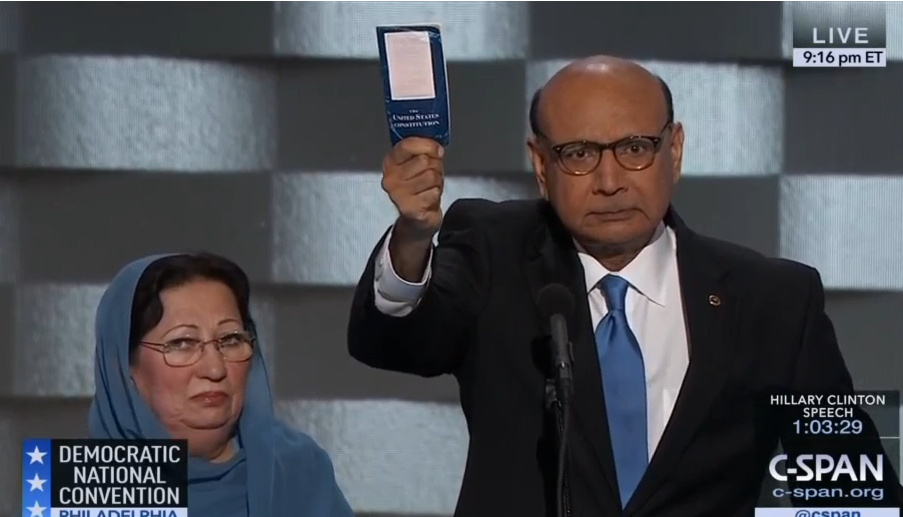 Screenshot of Khizr Khan and his wife at the Democratic National Convention in Philadelphia.

While many are criticizing Donald Trump’s rhetoric against the parents of a soldier who died in Iraq, U.S. Rep. Steve Pearce said the Republican presidential nominee’s comments are politically fair game.

Screenshot of Khizr Khan and his wife at the Democratic National Convention in Philadelphia.

The congressman from southern New Mexico, who supports Trump, told KOB that “most of the comments were right on track, talking about the sacrifice, heroism of the son.”

“And then he simply said the father shouldn’t be making a political issue of out of it,” Pearce continued. “That was well within bounds, in my opinion.”

In an email to NM Political Report, Pearce did criticize Trump, and this news outlet for this story.

“Everyone who is dragging Captain Kahn’s sacrifice and his family’s grief into the political realm is wrong that includes NM Political Report and candidate Trump,” Pearce said in a statement.

Pearce is a veteran who served as a combat pilot in Vietnam. He recently completed an around-the-world trip to remember veterans.

Gov. Susana Martinez criticized Trump’s statements on Khan. And another Republican congressman from New York cited Trump’s rhetoric, including about Khan, as a reason why he would not vote for Trump.

On ABC’s This Week in late July, following the Democratic National Convention where Khizr Khan spoke about his son who died in Iraq in 2004, George Stephanapoulos asked Trump about the speech.

Trump insinuated that Khizr Khan did not allow his wife, Ghazala Khan, to speak.

“His wife, if you look at his wife, she was standing there,” Trump said. “She had nothing to say. She probably — maybe she wasn’t allowed to have anything to say. You tell me, but plenty of people have written that.”

Ghazala Khan later wrote in the Washington Post that she “could not” speak because she still feels the pain of the loss of her son, Humayun.

“I cannot walk into a room with pictures of Humayun,” she wrote. “For all these years, I haven’t been able to clean the closet where his things are — I had to ask my daughter-in-law to do it. Walking onto the convention stage, with a huge picture of my son behind me, I could hardly control myself. What mother could?”

Trump also made comments about his own sacrifices, garnering even more attention to the fallout.

The Trump campaign also put out a statement saying Khizr Khan had “no right” to criticize Trump so publicly.

“Captain Humayun Khan was a hero to our country and we should honor all who have made the ultimate sacrifice to keep our country safe,” Trump said. ”While I feel deeply for the loss of his son, Mr. Khan, who has never met me, has no right to stand in front of millions of people and claim I have never read the Constitution, which is false, and say many other inaccurate things.”

This was the first time Trump mentioned Humayun Khan.

During Khan’s speech at the DNC, he pulled out a pocket constitution he later said he carries with him all the time.

“Let me ask you: have you even read the United States constitution?” Khan asked Trump. “I will gladly lend you my copy. In this document, look for the words ‘liberty’ and ‘equal protection of law.’”

Khizr Khan and his wife have become staples of cable news since his speech, speaking against Trump.

Update: We have adjusted the headline and lead of this story. The story no longer says that Pearce backs the “attacks” by Trump, but the “comments” of Trump on the parents of Humayun Khan. The rest of the story remains the same.

Update two: We have added a comment by Rep. Steve Pearce to this story.