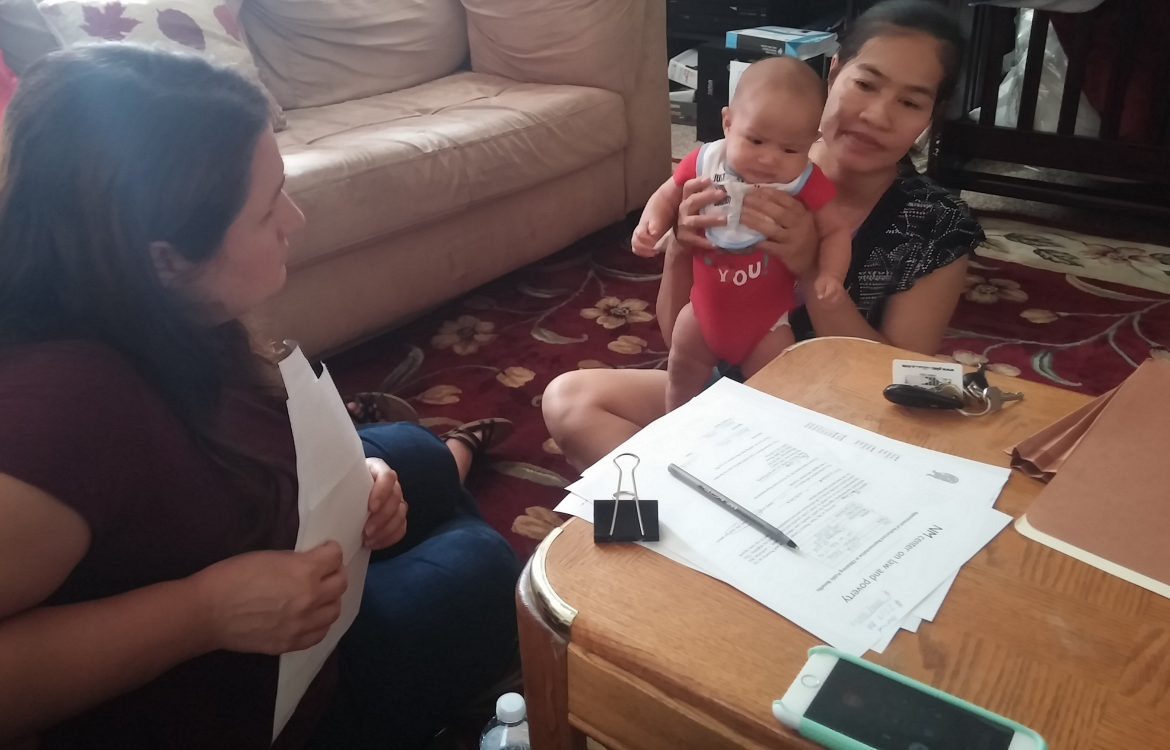 That’s not necessarily their problem.

New Mexico’s Human Services Department also wants the couple to pay back more than $2,000 in food aid awarded to the couple since last fall. The state now says they shouldn’t have received the food aid in the first place.

Kelley and Krotha question whether they can afford a repayment.

“I didn’t think that the money that they gave me, that they would ask for that money back,” Kelley, speaking Thai translated by an interpreter, said in an interview at her home with NM Political Report. “If I knew that before, I would not want it.”

But the state made multiple mistakes on processing Kelley and Krotha’s SNAP case over the last year. These errors may be enough to prevent the couple from having to pay back their overpayments.

“They followed the process, they did everything they were supposed to do,” Louise Pocock, an attorney with the New Mexico Center on Law and Poverty said, referring to the couple. “The department should have denied their income and didn’t, and now they’re collecting money from them when they shouldn’t.”

The state’s problems with Kelley and Krotha’s case date back to last September. At the time, the couple needed to submit updated financial information to the state to continue qualifying for the aid. By this time, they had already been receiving food aid for several months.

But a few things changed since the couple first qualified.

Kelley, pregnant with her son at the time, had picked up several more hours at her job at a nearby Thai restaurant. Her pay stubs, which she submitted to the state that fall, reflected this. Her wages put her household at too high of an income to qualify for federal food aid.

But instead of cutting her and Krotha off, HSD extended their SNAP benefits for three months and asked them to submit more information, including proof that Krotha had lost a job and proof that he was attending school.

“None of that was necessary,” Maria Griego-Paiz, also of the Center on Law and Poverty, said of the state’s request for additional information, “because they already had information that the family was ineligible.”

Griego-Paiz explained the situation to Kelley and Krotha on a recent weekday in the living room of their Albuquerque International District home. Krotha dropped a project he was working on in the kitchen and came in the room. Kelley, cuddling her son, listened at the edge of her couch.

Griego-Paiz’s cellphone sat next to the folder with an interpreter on speakerphone.

“They scheduled your SNAP case to close in December, when your benefits were supposed to end,” Griego-Paiz said, soon pausing for the interpreter to translate.

When December came around, “the computer malfunctioned and they gave you benefits all the way through June of 2013,” Griego-Paiz continued, “even though you shouldn’t have been eligible.”

The following February, an auditor at HSD reviewed Kelley and Krotha’s SNAP case and found the couple did not qualify to receive them. But once again, the state failed to cut the couple off.

That’s because supervisors at HSD did not read the audit until June, according to Griego-Paiz. Kelley and Krotha’s SNAP benefits also expired that month. HSD then ordered the state to collect just over $2,000 from couple, deeming it as the amount of SNAP benefits they shouldn’t have received since last fall.

But the state’s constant issues with processing SNAP benefits—which go far beyond Kelley and Krotha’s case—should prevent it from actually being able to collect the overpayments.

Ludwig was referring to HSD’s practice of awarding families three months of SNAP benefits before actually determining their eligibility for the program—much like the situation Kelley and Krotha today find themselves in.

Earnest recently affirmed to USDA that his department would stop collecting SNAP overpayments in these cases.

As Griego-Paiz explained the state’s problems in Kelley and Krotha’s living room, she told them “there are many cases like your case.”

The agency’s problems with SNAP recently prompted a federal judge to recommend the state agency be held in contempt of court. That same federal judge also recommended an independent monitor oversee HSD’s entire benefits processing apparatus through 2018 to put the agency in compliance with federal law.

“I don’t know what to say,” Kelley said about the state giving her benefits when it shouldn’t have.

After giving birth to her son, Kelley stopped working. Krotha currently works on contract as a truck driver. Though his work is sporadic, his wages are enough to keep the family off of food aid for now.

It’s paying the $2,000 back that he and Kelley express anxiety about. Kelley said they can’t afford to pay it all back in a lump sum.

Griego-Paiz is fighting this. She recently spoke to the supervisor at HSD in charge of Kelley and Krotha’s case, who she said  seemed to be “totally clueless” of the federal government’s request for New Mexico to stop collecting SNAP overpayments from recipients.

“The supervisor said, ‘Well, it doesn’t matter whose fault it was, the client owes the money,’” Griego-Paiz said. “So we didn’t get anywhere.”

An HSD spokesman didn’t respond to multiple requests to comment for this story.

This week, Griego-Paiz will speak for the couple in a hearing with to an administrative law judge. She said she will argue that Kelley and Krotha’s situation is exactly the type of case the federal government is trying to prevent the state from collecting overpayments on.

View all Center on Law and Poverty articles →