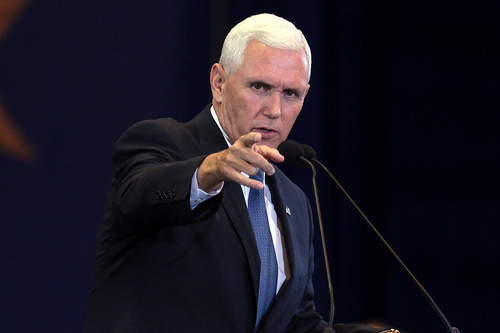 Governor Mike Pence speaking with supporters at a campaign rally for Donald Trump at the Phoenix Convention Center in Phoenix, Arizona. Flickr/cc

The Republican Vice Presidential nominee will make two campaign appearances in New Mexico in addition to a previously-reported fundraising event.

Governor Mike Pence speaking with supporters at a campaign rally for Donald Trump at the Phoenix Convention Center in Phoenix, Arizona. Flickr/cc

Indiana Gov. Mike Pence, who is Donald Trump’s running mate on the Republican ticket, will make an appearance in Albuquerque and one in Roswell, both on Tuesday.

Pence’s Albuquerque appearance will be at the Sandia Ballroom at Sandia Casino at 1:00 p.m. In Roswell, Pence will appear at New Mexico Military Institute at 8:00 p.m.

It’s not clear if Pence will hold a fundraiser in Roswell as well as Albuquerque.

The rallies will be the first public events by major political figures in the general election. Ahead of the primary, Trump himself held a rally in Albuquerque, as did U.S. Senator and then-Democratic candidate Bernie Sanders. Sanders also campaigned in southern New Mexico. Bill Clinton, the former President and husband of Hillary Clinton, also campaigned in New Mexico ahead of the primary.

New Mexico is not considered a swing state by political observers and is expected to go for the Democratic presidential candidate for the third election in a row and the sixth time in seven elections.

While Hillary Clinton has not held a campaign rally in New Mexico, she headlined a fundraiser in Albuquerque over a year ago.

There has been no recent public polling of New Mexico, though a poll conducted for NM Political Report by Public Policy Polling in May found Clinton leading Trump by 8 percentage points.

The Democratic Party of New Mexico announced they will hold a press conference Monday to react to Pence’s rally.

Former New Mexico Governor Gary Johnson, who is the Libertarian Party presidential nominee, will also hold a rally in Albuquerque this week. Johnson’s rally will take place Saturday at the Albuquerque Convention Center.