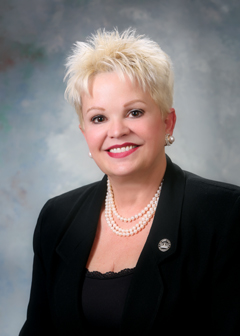 Secretary of State Brad Winter cleared the Republican candidate seeking to fill his seat of six allegations filed against her in an ethics complaint last month.

Those six allegations, filed by state Democratic Party Treasurer Robert Lara, accused candidate Nora Espinoza of multiple violations of the New Mexico Campaign Reporting Act. Lara, an attorney, previously told NM Political Report that he filed the ethics complaint as a private citizen and not on behalf of the Democratic Party.

While Winter dismissed all of the allegations, his office did give guidance to Espinoza on addressing some issues.

“Although we do not find any violations of the [Campaign Reporting] Act, the Espinoza campaign is cautioned to ensure that all campaign reports submitted in the future accurately reflect the name and purpose of all expenditures and in-kind contributions,” Winter wrote.

On the complaint, Lara accused Espinoza of not properly disclosing campaign expenses that she used to reimburse her personal credit card. Winter wrote that Espinoza’s listing of these expenses as “Citi Cards” does not violate state statute, he still described this practice as a “concern.”

“While Ms. Espinoza listed who payment [sic] was made to, ‘Citi Cards,’ we believe the intent of the statute is to identify the vendor to whom the expenditure was made,” Winter wrote.

Espinoza, he wrote, “should provide the greatest information possible” in her reports “including but not limited to the specific vendor to whom the expenditure was made.”

Another of Lara’s complaints accused Espinoza of not properly naming the occupations of some of her donors and instead writing “businessman” or “business owner.”

Winter didn’t find this violated state law because the Campaign Reporting Act “does not define the word ‘occupation.’”

“However, in an effort to promote transparency, the Campaign should provide the greatest information possible when reporting the occupation of type of business operated by a donor,” Winter wrote.

In both of those cases, Winter encouraged Espinoza to amend her campaign finance reports.

Winter didn’t provide similar guidance on his dismissal of the rest of Lara’s complaints, which accused Espinoza of using her campaign money for personal business, not reporting a purpose for some of her campaign expenses, not reporting one donor per donation and not reporting an alleged in-kind contribution from state Rep. Zach Cook, R-Ruidoso, who filed an ethics complaint against her Democratic Party opponent Maggie Toulouse Oliver.

Cook, who previously told NM Political Report that he filed the complaint in June on behalf of himself and not Espinoza, accused Toulouse Oliver of not reporting an in-kind contribution related to a transfer of money between two political action committees that supported her in her 2014 run for Secretary of State.

Both PACs listed in Cook’s complaint were not associated with Toulouse Oliver’s campaign.

Winter similarly dismissed that Cook’s complaint earlier this month, citing an affidavit from Toulouse Oliver’s campaign manager that stated that the PACs were separate from her campaign.

Read Brad Winter’s response on the complaint against Nora Espinoza below: