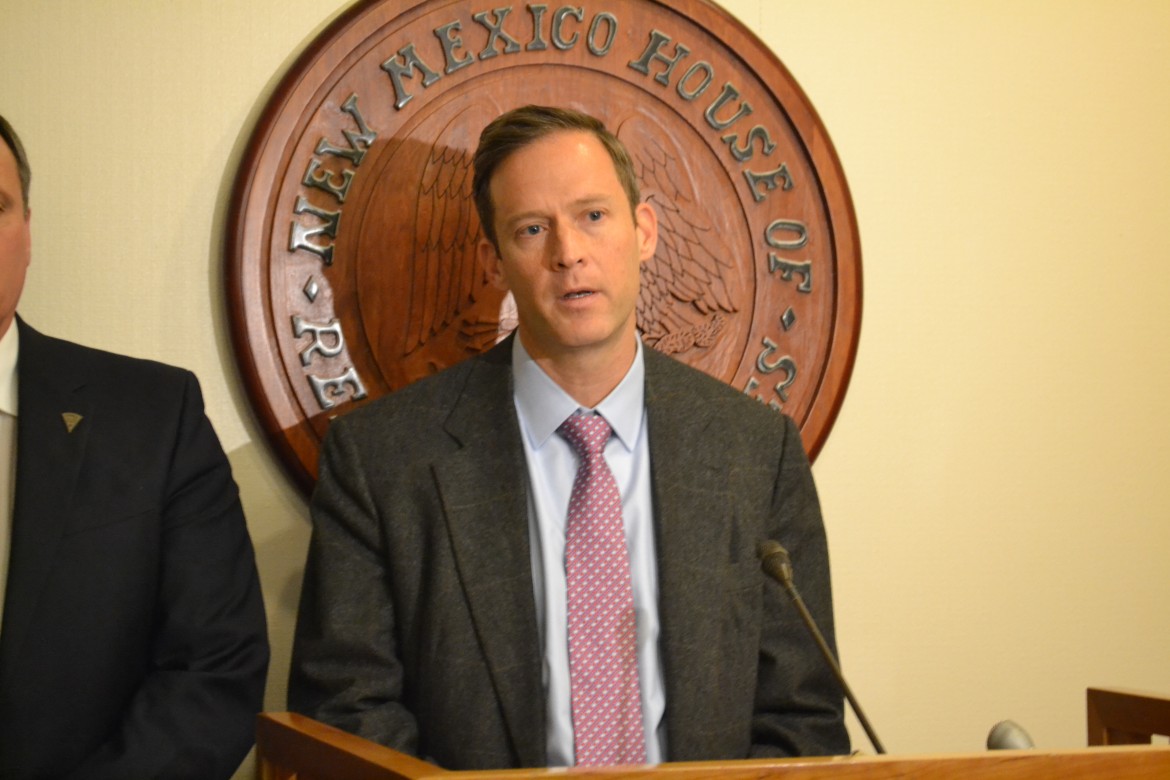 New Mexico lawmakers haven’t been in session for nearly seven months, but that didn’t stop the Majority Leader of the state House of Representatives from awarding more than $100,000 in contracts to his top staffer.

But Rep. Nate Gentry, R-Albuquerque, defended the contracts of his de-facto chief of staff Ryan Gleason as “well worth the expenditure.”

Gentry snagged Gleason—an attorney who previously was a legislative assistant Sen. Pete Domenici, the New Mexico state director for the U.S. Department of Agriculture and a research director for the state Taxation and Revenue Department—from state Speaker of the House Don Tripp, R-Socorro.

Gleason worked as Tripp’s full-time chief of staff from January 2015 through the end of this year’s general legislative session in February.

Gleason’s switch from working for Tripp to working for Gentry reflects how the bulk of policy decisions in the House Republican leadership start with Gentry.

“The Speaker needed more of an administrative assistant,” Gentry said.

Tripp is currently contracting $38,100 with Glenn Walters for “management of the Speaker’s Office” and to “communicate and coordinate,” according to the state Sunshine Portal. That contract runs from July through December.

Walters also contracted $8,100 for the same work for Tripp for most of May and all of June.

Gleason’s taxpayer-funded contracts to work for Gentry didn’t begin until nearly two months after this year’s general legislative session ended, on April 12. They total $41,250 from April through June and another $55,911 from July through this November.

Gleason’s second contract was amended to a total $60,000 as of Aug. 1, according to the state Sunshine Portal.

Gleason received the contracts through professional services agreements with the Legislative Council Service, which drafts legal agreements for both the state House and Senate.

His job duties, which amount to more than $71 per hour for 40-hour workweeks and are described in two sentences, include “post-session analysis, communications, policy analysis and development” and “other duties as generally requested and directed by the Majority Leader of the House.”

“He takes on a whole host of jobs,” which include following interim legislative committee meetings, Gentry said.

“He is very talented,” Gentry said, “and frankly we were worried about losing him to someone else.”

Screenshot of Ryan Gleason from 2013 interview with New Mexico Watchdog.

Together, Gleason’s contracts go well past the $60,000 benchmark that state law requires public contracts to be put out for competitive bid. But because they’re technically two contracts, both fall below that figure and could be awarded to Gleason sole source. And they were.

Before Gleason came onto the House Majority staff, that office’s salaried positions were occupied, which is why Gleason works as a contractor, Gentry explained.

Gentry also noted that the cost to taxpayers is equivalent to Gleason’s prior role as Tripp’s chief of staff, where he served as a full-time employee with benefits and made around $100,000 a year salary.

The total cost of Gleason’s previous role, including benefits, amounted to $138,640, Gentry said. As a contractor with the state now, Gleason must pay all benefits and taxes himself.

“He doesn’t have a retirement plan,” Gentry said. “He has to get his own medical insurance. He doesn’t get his own travel (compensation).”

But to Rick Miera, a former state representative from Albuquerque who was Gentry’s predecessor as Majority Leader in 2013 and 2014 when Democrats controlled the House, the price seems steep.

“There’s not much to do during the interim,” Miera said. “That’s over the top.”

The second highest-paid contractor from the House interim budget, according to the state’s Sunshine Portal, came under Miera’s watch. That went to Regis Pecos, Miera’s chief of staff, in the fall of 2013.

At that time, Pecos got paid around $34,000 for work for Miera that lasted from mid-August through the end of the year. Pecos’ work for that contract amounted to $50 per hour.

Before the contract with Miera’s office, Pecos worked as chief of staff for former House Speaker Ben Luján.

As with Gleason, during the interim, Pecos followed interim committee meetings and reported to Miera.

Miera said he also made Pecos available to any member of the House, Democrat or Republican.

Miera said while he served as Majority Leader, he mainly contracted with Pecos and Lisa Ortiz, who did secretarial work.

The money for contracting comes from the budget for the House Chief Clerk, which lawmakers approve each year in the Feed Bill.

Gleason’s contract of $60,000 for this fiscal year is nearly half of the money approved for all contracts in the House Chief Clerk budget for fiscal year 2017.