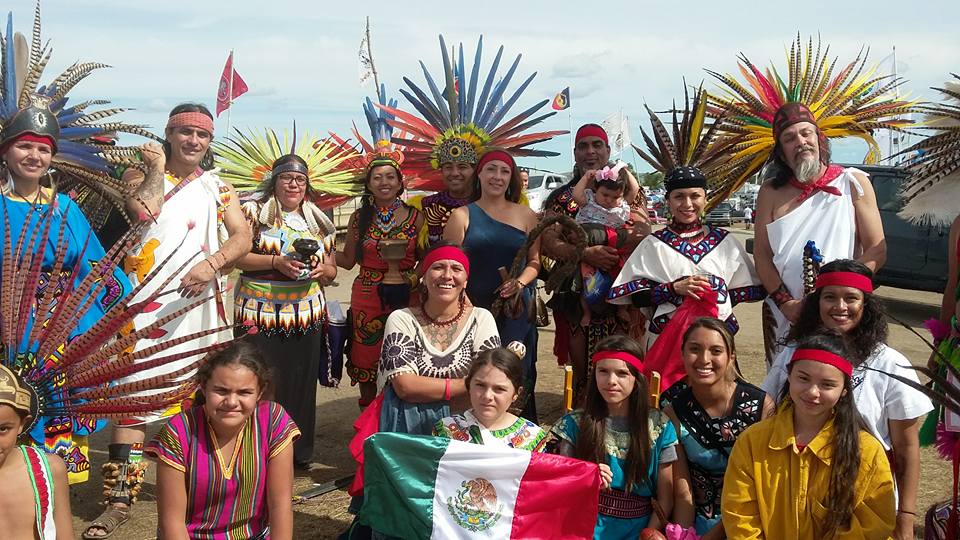 Over the weekend my family along with other Aztec Dancers from across the US made our way to Standing Rock Reservation to show our solidarity with Dakota relatives who are taking a stand against a crude oil pipeline that will (and has already) cut across their sacred land and river.

We were there not only to offer our support through sacred dance, but some of us undertook the long journey to join the Standing Rock Sioux Tribe in North Dakota because we are immersed in our own battles to protect water here in New Mexico. That was the driving force for many of the other People who were there as well – indigenous People and communities across the nation facing an onslaught of water battles. It is vital to understand that what is happening in Standing Rock is not just a get together, it is a serious demonstration of solidarity among People who understand that communities and their livelihood are being threatened (again).

Across the U.S. and the globe, the Water Wars are waging on and what is happening in Standing Rock is yet another blatant in-your-face example of corporations and monied interests coming into communities to take for the sake of continued profit. Profits over people— there is no other way to state it. If one takes the time to analyze the situation, it is always the same. Those who have and want to continue to have and who are usually backed by the law, taking from those who largely do not have and have been forcefully placed low in this hierarchical system.

Dr. Virginia Necocha is the executive director of the Center for Social Sustainable Systems and runs Kalli Consulting Services.

As I was physically, mentally, and spiritually present in Standing Rock, I continued to think about the similarities between the Dakota Access Pipeline (DAPL) project and the dreaded Santolina development looming in our own backyards. Tears and strong emotions that could not be held back as I thought about how our own communities and its water resources are being threatened by profiteering corporations such as Western Albuquerque Land Holdings (WALH), the developers of Santolina and the other massive developments to be built on the West Side of Albuquerque.

The game is the same. Corporations have money, so they can dictate and leverage politicians and the law to work in their favor. In the case of Santolina, the pawns have been lined up for decades—from changes in local zoning laws to deletions of important statements in Water Authority policies that will finalize the separation of land use issues from water. For those of us who are connected to indigenous traditions and/or who understand water systems, there is no such separation. Land and water are always connected and should always be treated and seen as such but not in the eyes of local authorities for separating land from water makes the stealing of the People’s water that much easier.

Over the last couple of years, I have realized that many people across the state are familiar with Santolina and are beginning to understand the threats it will ultimately pose, but the overwhelming majority are still not aware. This is due to inadequate mainstream media coverage on local news outlets or sadly, the gente of Burque just don’t care or see the importance or relevance of the issue. The harmful impacts of Santolina taking billions of gallons of water causing the eventual drying up of our wells in the Valley are seen as too far away. As long as they can turn on the tap or visit the ever so trendy Farmer’s Markets in town, they are good. I wonder if folks realize the majority of the food they buy and place in their sustainable-boasting burlap bags is grown in the place that will be most impacted by the Santolina beast–the Valle de Atrisco (a.k.a. South Valley)?

Santolina has been sold as a money-making, job-producing venture or at least that is what the Bernalillo County Commissioners and local politicians believe and are pushing on the rest of us. But if you take a closer look, it’s the same crock of mud being sold by Energy Transfer Partners regarding the DAPL to the People there. “We bring jobs.” “We bring solutions.” All a façade to hide the profits corporations stand to make at the expense of the long-term wellbeing of communities.

The Water Wars are here and not just in connection to Santolina. Just a couple of weeks ago members of the Navajo Nation organized an annual walk to continue to call attention to the harmful water contamination from toxic mine spills their communities continue to face. San Agustin Plains are facing their own plight against a company that wants to transfer (steal) millions of gallons of water from their community to possibly Albuquerque and Rio Rancho. Chaco Canyon faces threats from fracking. And there are many more examples.

This in essence is a call to action. The People and communities in New Mexico must come together to protect sacred water of life. Now is the time to bring the networks together. Let’s use the power of Standing Rock as a catalyst to bring us together so that collectively we can say – Ya basta! We’ve had enough.