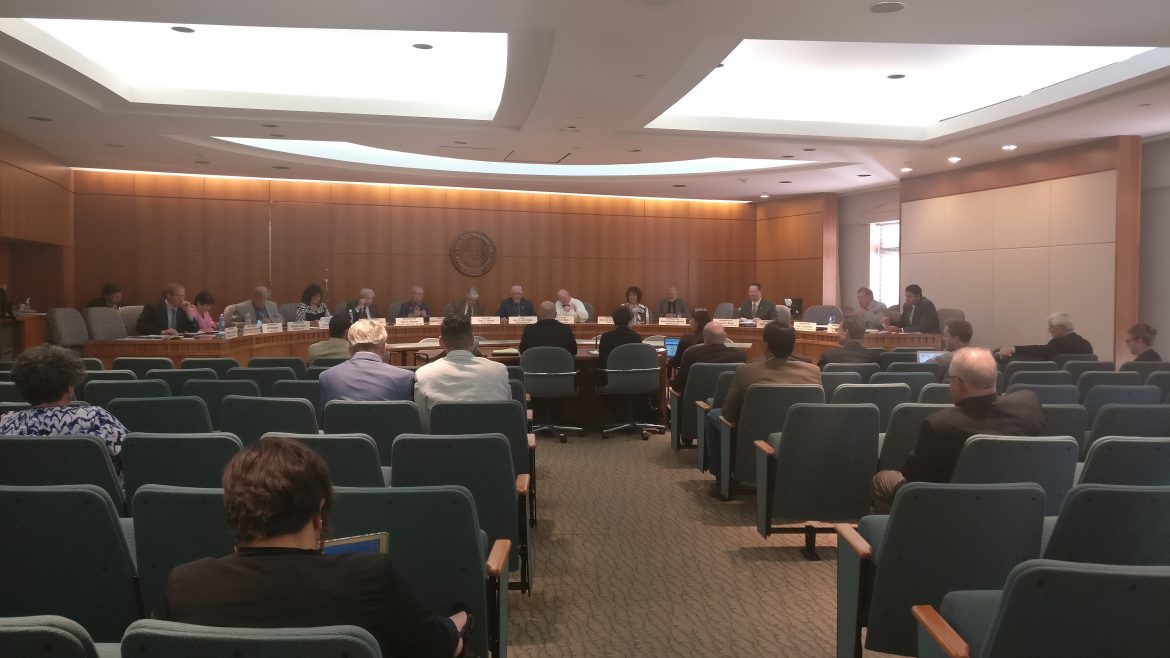 The House Appropriations and Finance Committee during the 2016 special session

A House committee held off on any changes to a bill providing big cuts across most state agencies to give lawmakers and the public more time to review the deal.

The House Appropriations and Finance Committee during the 2016 special session

This came even as the panel, the House Appropriations and Finance Committee, approved a bill to shift capital outlay funds for infrastructure projects and another to sweep unused reserves to the general fund to shore up the state’s large budget deficit.

While the amendment to deepen some cuts, and halt others, did not go forward it will likely be the structure for a version to be heard on the House floor, as early as Monday.

The proposal on the bill to cut spending would have deepened cuts for many state agencies.

The committee amended the Senate bill that provided spending cuts to cut most state agencies by 5.5 percent instead of the 5 percent in the original Senate version.

The amendment also increased the cuts from the state’s Cultural Affairs Department from 1.5 percent to 5.5 percent.

At the same time, it would have reversed some other cuts, including cuts to the program support programs of the Children, Youth and Families Department and the Department of Public Safety. Investigative and child protection areas of CYFD were not touched by the Senate bill, as one member of the committee noted.

The Public Education Department would still see 1.5 percent in cuts under the initial House proposal, but those cuts would be restricted to non-school money.

Rep. Doreen Gallegos, D-Las Cruces was concerned about cuts to the courts, district attorneys and public defenders, especially in light of the crime bills the House pushed during the special session and the regular session earlier this year.

The committee passed the unamended bill on a 10-6 vote, but the changes that Roch and others come up with will happen on the Senate floor.

While shared sacrifice and calls for all those in the state to have “skin in the game” are regular occurrences this special session as legislators decide how to fix the budget deficit, a bill that targeted capital outlay projects strained those high-minded ideals.

Rep. Bill McCamley, the Las Cruces Democrat who presented the bill on the House side, acknowledged the bill was difficult.

The Senate legislation would deauthorize general fund projects and replace that funding with severance tax money, opening up the general fund money to go towards the deficit. The bill would also reduce water, tribal and colonias earmarks by 1 percent.

Rep. Sharon Clahchischilliage, R-Kirtland, was particularly concerned about infrastructure projects on the Navajo Nation that are part of the cuts.

She noted that many areas in the Navajo Nation don’t have basic infrastructure like running water and electricity.

She also blamed the Senate for the numbers.

“They received help, but they presented it, they brought it over to us, so this is from the Senate,” Clahchischilliage said.

“The lesson here is that the capital outlay process begs for reform in many different ways,” Committee chair Larry Larrañaga, R-Albuquerque, said.

That bill moved forward on a 14-2 vote, with Rep. Luciano “Lucky” Varela, D-Santa Fe, joining Clahchischilliage in voting against passage.

A surprise addition to the committee’s agenda was the House version of a bill that swept money from the tobacco settlement permanent fund and other funds to the general fund.

The surprise largely came because the committee already passed the Senate version of the bill (with one key amendment). But Rep. Paul Bandy, R-Aztec, said legislators found more money that could be transferred.

It was that final change that proved most controversial and likely unconstitutional.

Reps. Jeff Steinborn, D-Las Cruces, and Stephanie Garcia Richard, D-Los Alamos, questioned the constitutionality of using those funds, but Larrañaga and Roch said they believed it was legal.

The constitution says all the funds in “a public employees retirement system or an education retirement system created by the laws of these state shall be held by each respective system in a trust fund to be administered and invested by each respective system for the sole and exclusive benefit of the members, retirees and other beneficiaries of that system.”

Rep. Christine Trujillo, D-Albuquerque, said after the committee passed the bill, Wayne Probst, the executive director of the state’s Public Employees Retirement Association told her it was, indeed unconstitutional.

The Legislature can stop money from going into the fund, over $2.5 million annually, but cannot take money out of the fund once it goes in.