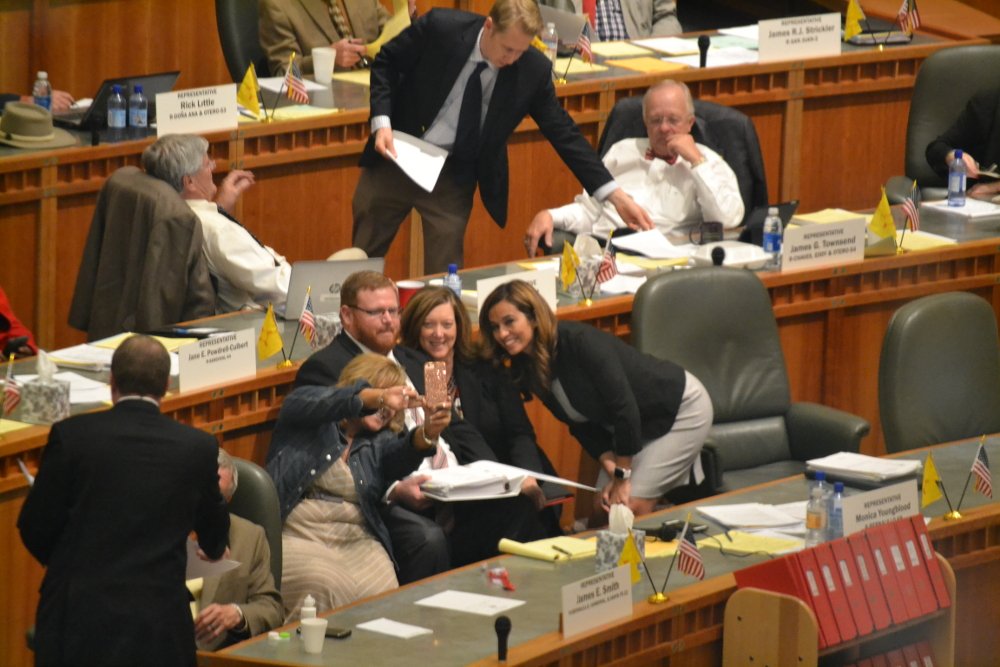 Monica Youngblood (r) and expert witnesses on death penalty reinstatement take a selfie before debate on the bill during the 2016 special session.

The final hours of  the 2016 special session were among the most surreal I’ve spent at the Roundhouse.

The strangeness peaked just before 12:45 a.m. The House sent a bill to slash the budget back to the Senate, with some changes after hours of debate. After just minutes of discussion, a tax package went from the House over to the Senate.

Then, the House kept going—for the rest of the night.

Let’s back up. This was the fourth time I covered a special session since I began covering New Mexico politics full-time in 2008. I have also covered seven regular legislative sessions.

The Senate had already finished all their work on budget bills in about 12 hours from Friday night into Saturday morning then adjourned sine die. The Senate went home, and the House couldn’t force them to come back until the following Thursday.

After taking a day off on Tuesday, the House went back to the state capitol Wednesday—then promptly spent more time behind closed doors in caucus meetings than debating bills on the floor.

At one point Wednesday afternoon, House Republicans paused mid-debate on a budget bill to caucus. They then stayed behind doors in caucus for hours.

House and Senate Democrats said House Republicans should have focused on budget bills instead of the crime bills that gained relatively quick passage through the chamber.

All of them passed quickly except the bill to bring back the death penalty. This was the one crime bill left for the House’s to pass as Wednesday night turned into Thursday morning during floor debate. At the time, the House had just finished debate on a critical bill to cut spending throughout the state to balance a pending budget deficit.

At 12:45 a.m., House Republicans announced they would leave the regular calendar, with several more budget bills on tap, and move to a supplemental calendar with just one item: The reinstatement of the death penalty.

Minutes before she took over as one of three expert witnesses on the death penalty bill, Department of Public Safety General Counsel Amy Orlando decided it would a good time to take a selfie.

Democrats and critics of the death penalty widely ridiculed the selfie, sharing it repeatedly on social media in the early morning hours of Thursday.

Youngblood would have to wait for two hours to actually debate the death penalty, while her expert witnesses sat behind her, waiting.

Democrats argued that House leadership failed to give legislators in the minority and, more importantly, the public no advance notice on bringing up the death penalty bill. Instead, they argued that the House should go back to the regular calendar and take up budget issues.

The House would end up passing more budget bills and working until 7 a.m.

Roundhouse staffers who went home the previous evening came back to a stream of bleary-eyed legislators exiting the building as the sun rose on Thursday morning. Legislators had time for a change of clothes, a shower and maybe a quick nap before returning by 11 a.m.

Later Thursday morning, the Senate returned to the Roundhouse, agreed with the House’s changes on the budget bills, and ignored the crime bills. Both chambers adjourned, went home and the seven-day special session, as quickly as it began, was over.