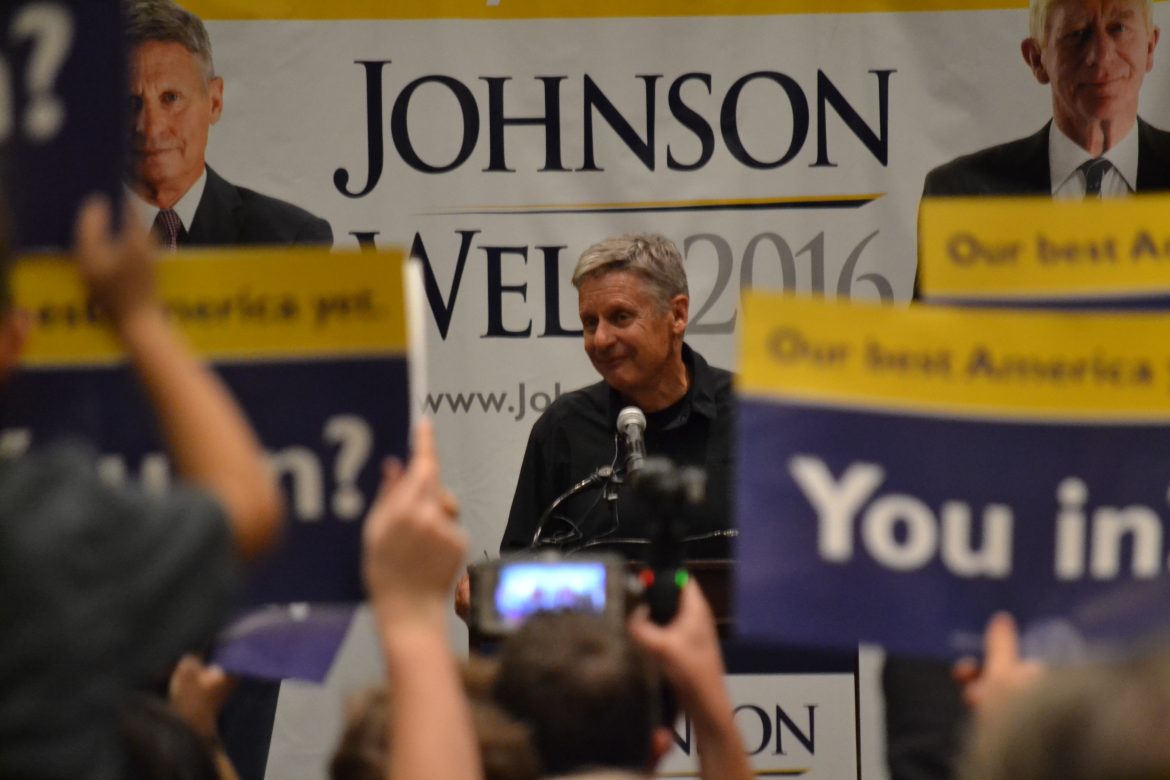 Gary Johnson pitched himself to disaffected Republicans and Democrats alike at a campaign rally with a couple of hundred supporters at the University of New Mexico Saturday.

“It’s a rigged game,” the Libertarian Party presidential nominee said of inclusion to the presidential debates.

But Johnson got a big roar from the crowd when he said he was “halfway expecting to get on a plane tomorrow for the debate.”

That came from the elephant in the room—Donald Trump’s recent widely publicized 2005 comments about women to then-Access Hollywood host Billy Bush.

In the leaked video that grabbed headlines Friday afternoon, Trump told Bush that he would sometimes kiss women without their permission “and when you’re a star, they let you do it. You can do anything.”

“Grab them by the pussy,” Trump said. “You can do anything.”

Johnson said in a press conference before the rally that Trump’s comments “are not even appropriate in a locker room.”

Since the Trump comments became public, the former New Mexico governor said that “dozens of elected officials” contacted his campaign, but he declined to name any of them publicly.

Johnson also faulted Trump for already having said “maybe 150 things that should disqualify him from being the president.”

But the recent leak of Trump’s 2005 comments led people like New Mexico College Republicans Federation Chair Michael Aguilar, to announce the group will be backing Gary Johnson instead of Donald Trump.

Aguilar said the group was “disgusted by these remarks by Donald Trump.”

Johnson himself received attention in recent weeks because of his own high-profile gaffes (though none near the level of the current controversy Trump finds himself in the middle of).

At the rally, Johnson addressed his notable“What is Aleppo?” gaffe.

He also launched into an explanation of the many-sided war in the Middle East.

Chances in the polls

Johnson noted that the Albuquerque Journal poll released Sunday showed him at 24 percent in the state. He said that he believed he had a chance in other states as well, specifically Alaska, Colorado and Utah.

Supporters watch Gary Johnson during rally at the University of New Mexico in October of 2016.

Johnson boasted that he is tied for support among millennials and in the lead among active military.

He told the crowd of supporters his best chance was to win a state, such as New Mexico, then have neither Hillary Clinton nor Trump reach 270 electoral votes. This would send the election to the House of Representatives, who would choose among the candidates who received votes in the electoral college.

“More people on this planet are going to die if Hillary Clinton is President of the United States,” Johnson said, referring to his view that Clinton will start more wars if she were to win.

Johnson also waded into the Black LIves Matter movement, an area that has tripped up a number of politicians.

Johnson said black people in America are more likely to be arrested or shot by police than white people.