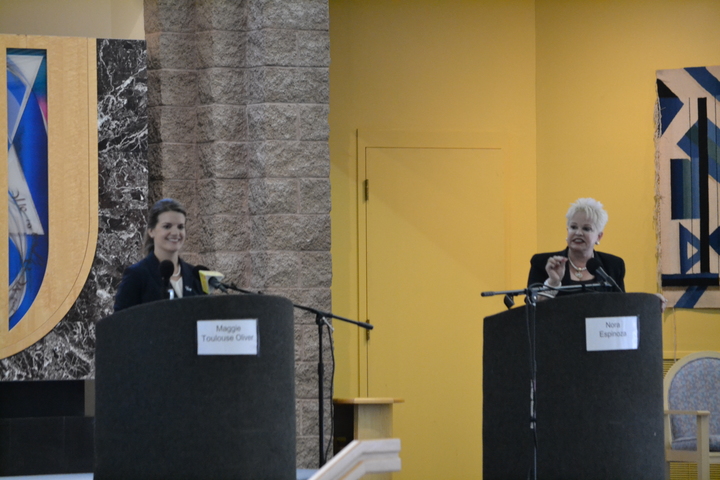 In a debate characterized by a negative tone not unlike the recent showdowns between presidential candidates, both candidates for New Mexico Secretary of State laid out their visions for the office.

Democratic candidate and current Bernalillo County Clerk Maggie Toulouse Oliver started by invoking the only reason the office is up for grabs this year in the first place.

“We had a secretary of state who violated the very laws and ethics that she was charged with upholding,” Toulouse Oliver said. “I’m running to restore integrity, transparency and trust in the Secretary of State’s office.”

Former Secretary of State Dianna Duran, a Republican who beat Toulouse Oliver in the election for the office two years ago, last year pleaded guilty to using her campaign funds to fuel a gambling habit. Duran, a Republican, resigned from office, spent 30 days in jail and is currently on five years of probation.

Nora Espinoza, a state representative from Roswell and Republican candidate for secretary of state, spent most of her time answering questions by lobbing off-topic attacks toward Toulouse Oliver.

Like Duran, Espinoza’s campaign is largely based on her support for a photo voter ID law.

“When it comes to integrity, we must support voter ID,” Espinoza said.

She also argued that the secretary of state position is administrative in nature and should not take political positions on many issues.

But oftentimes conversation between both candidates on policy questions remained absent from the forum, which lasted for one hour late Sunday morning at Congregation Albert in Northeast Albuquerque.

When both candidates were asked to name two or three of the biggest responsibilities of the office, for example, Espinoza criticized Toulouse Oliver for not supporting voter ID laws, registering an “illegal citizen” to vote and for having a treasurer on her campaign who has also worked for political action committees.

She added that “it’s extremely telling that my opponent didn’t answer the question.”

“Instead she launched into a completely unwarranted attack,” Toulouse Oliver said.

Toulouse Oliver later said she didn’t learn about Lechuga-Tena’s registration until last fall, when the Bernalillo County Commission appointed her to the state House of Representatives. Toulouse Oliver then referred the breach to the district attorney’s office, which took no action, since statute of limitations on the legal breach had ended.

When moderator and Albuquerque Journal Editor Kent Walz asked about whether voters should be allowed to bring guns into election centers (the questions were submitted beforehand from audience members), Espinoza said that was up to the Legislature to solve.

The same went for Espinoza on a question about reinstating straight-ticket party voting.

“The Legislature—the House and Senate—are bipartisan. They pass bills,” Espinoza said. “And the No. 1 responsibility [of the secretary of state] is to administer those laws.”

Toulouse Oliver, who opposes allowing guns in election centers and supports straight-ticket party voting, criticized Espinoza for picking and choosing issues. She argued that the secretary of state “should have something to say” on issues and can lobby for or against them.

“For certain issues, she doesn’t take a position,” Toulouse Oliver said of Espinoza. “But when it comes to voter ID, she follows a different path.”

Espinoza described this anomaly by calling voter ID “the integrity of the entire process.”

On this subject, Toulouse Oliver noted that courts are striking down voter ID laws passed in other states because they don’t abide by “one person, one vote” rules.

“I support any legislation that adds integrity to the process, but not one that disenfranchises votes,” Toulouse Oliver said. “These laws are being designed in a discriminatory way to prevent people from voting.”

“This is about doing what’s right,” she said.