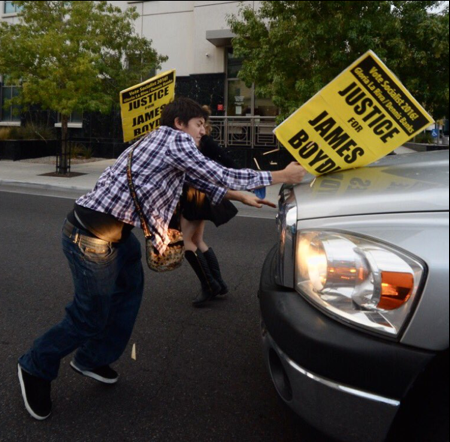 Albuquerque police announced Monday the arrest of a man allegedly involved in property damage last week during the protest of a hung jury in the trial of two APD officers charged with murder.

When a truck tried to drive through protesters who were blocking traffic on Lomas Boulevard near to state courthouse, one protester slammed his sign against the truck. The protester, police say, is Imbus.

The damage to the truck was under $1,800, according to police.

Imbus is  a teacher at John Adams Middle School. Police arrested Imbus at his work. While announcing the arrest, police also released video of officers handcuffing Imbus and putting him in the backseat of a police car.

APD spokesman Fred Duran said they are looking for at least one more female potentially involved in the property damage.

In the release announcing the arrest, police cited the property damage taking place “on live television.”

Protesters took to the streets the night after a jury could not come to a verdict in the murder trial of Keith Sandy and Dominique Perez. The two former Albuquerque police officers were charged with first-degree murder in the killing of James Boyd, a homeless camper.

With the mistrial, prosecutors can choose to try the trial again.

Correction: The photo was originally credited to the Albuquerque Police Department, as it came in the press release about Imbus’ arrest. The photo is by Nick Fojud of the Daily Lobo and the credit has been changed to reflect that, after reaching out to Fojud.