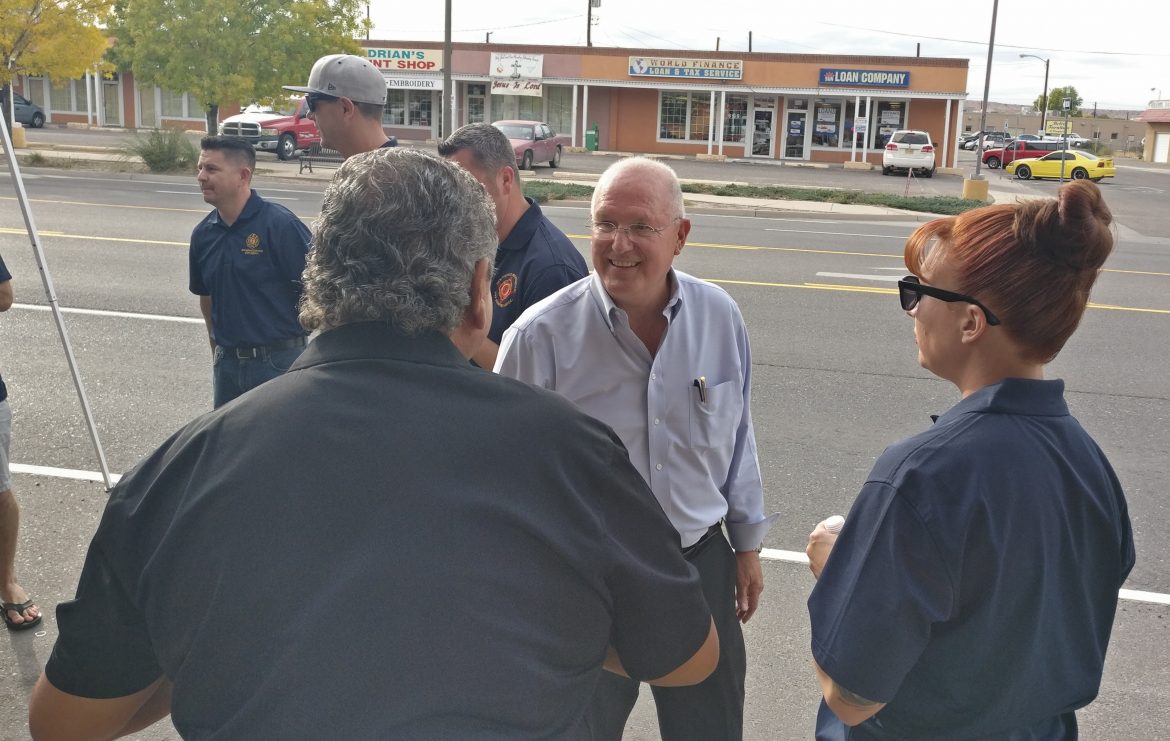 Michael Sanchez speaking to supporters before a canvassing event in Belen.

In his race to retain his Senate seat, Michael Sanchez never mentions the name of his opponent. But he does frequently mention his political nemesis over the last six years, Governor Susana Martinez.

That’s because Sanchez, the Senate Majority leader from Belen, is the top target of Republicans this year. Advance New Mexico Now, a Republican super PAC with close ties to Martinez, is spending hundreds of thousands of dollars in an attempt to defeat the Democratic Senate leader.

“There’s no way that I can raise the amount of money that Advance New Mexico and this governor can raise against me,” Sanchez told NM Political Report. “There’s no way I can do it and I’m not even going to try to do that. All I can do is take our message to the people and I believe once they hear our message and understand what we’ve done in the Legislature that we will prevail.”

One way to bring his message to voters is doorknocking from a wave of volunteers and other supporters, including organized labor from throughout the state—and even country.

That’s why American Federation of Teachers President Randi Weingarten took time to visit Belen this week and campaign on behalf of Sanchez. Like Sanchez, she viewed Martinez as the main adversary.

“We want to do everything we can to make sure that Michael Sanchez and the Democrats have the heft they need to fight what has become a toxic Santa Fe environment,” Weingarten said. “Gov. Martinez is very focused on Gov. Martinez, not on the needs of the people in New Mexico.”

This is the second time in as many weeks marking a prominent national figure backing Democrat campaigning in New Mexico focusing on local legislative races instead of the presidential race, where Hillary Clinton appears to have a healthy lead.

“In our system of government, in the United States, state governments have not just huge power, but also that’s where the quality of life for Americans basically gets dealt with,” Weingarten explained.

She mentioned funding for early childhood education and increasing the minimum wage to a “living minimum wage.”

Organized labor is clearly behind Sanchez. In addition to AFT, representatives from firefighters’ unions, sheet metal workers and baker’s unions canvassed for Sanchez. After his interview with NM Political Report, Sanchez addressed the nearly 100 supporters in a crowded, hot campaign office before they began canvassing.

He admitted, “I’m a little beat up” and said the attacks against him have been “unspeakable and untrue.”

A one-minute ad airing shows mothers of children who were killed speaking about the crimes, then blaming Michael Sanchez for not passing tougher penalties on crime.

“Advance New Mexico, run by the worst type of a person that has ever come out of New Mexico, runs that PAC like it’s his own,” he said, in a not-so-subtle reference to Martinez’s top political adviser, Jay McCleskey.

McCleskey runs McCleskey Media Strategies, which has been paid to do consulting work for Advance New Mexico Now. Melissa Sousa is the CEO of the PAC, and was the 2014 campaign manager for Susana Martinez.

“She doesn’t like me, because I’ve stopped some of the awful types of legislation that she proposes,” Sanchez said. “Legislation that would hurt New Mexico working families [like] the so-called right-to-work bill.”

He continued: “I can tell you, if I’m elected and I’m sending this message loud and clear to my opponent and to this governor: Right-to-work will never pass in the New Mexico Senate.”