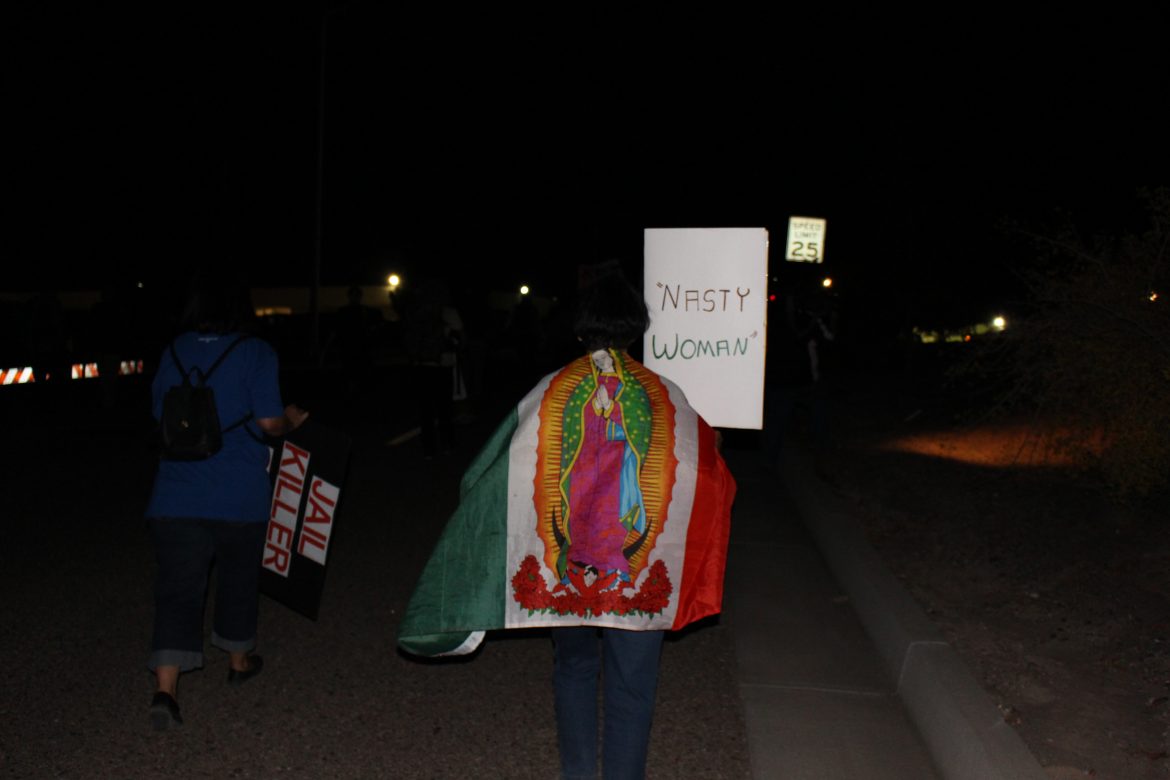 Protests outside the Donald Trump rally Sunday evening in Albuquerque were less chaotic than a previous rally with the Republican presidential nominee.

There were about 50 protesters at the protest’s peak and no apparent property damage or arrests were made.

Before the rally started, a handful of protesters gathered on a nearby corner holding signs that read “Trump Owns the FBI the system IS Rigged” and “Trump vs All of Us.”

The signs were positioned so Trump supporters could see them as they walked to the rally.

One man stopped at the corner and rested against a nearby stop sign as a sign holder asked if he was alright.

“I’m fine, but our country is going to shit,” the man replied.

The two men exchanged verbal blows about both Hillary Clinton and Trump until the Trump supporter flipped off protesters and tried to knock a camera from the hands of an Associated Press reporter.

A little dust up on the walk into Trump rally. #nmpol pic.twitter.com/2g3brJUfdV

The same supporter later took out his frustrations on members of the press inside the rally.

The protest group’s numbers soon doubled as they made their way up the hill to an airplane hangar, armed with a drum and a loudspeaker. The group was soon met with about 25 armed SWAT officers who blocked the entrance to the rally. One officer announced that the venue was closed to both protesters and supporters by order of the Secret Service.

The blockade led to a situation where both supporters and protesters were free yell and argue face to face.

Executive Director of activist group Southwest Organizing Project Javier Benavidez held a speaker blaring an alarm sound in an attempt to disrupt the rally, which may have worked. A couple hundred people streamed out of the rally about 15 minutes early and Trump himself mentioned the noise, saying he thought it was an alarm.

The demonstrators were well on their way out before the rally ended, but not before at least one violent outburst that quickly ended.

VIDEO: Violence breaking out between. @realDonaldTrump supporters and protesters in #ABQ pic.twitter.com/4TWU2stPqh