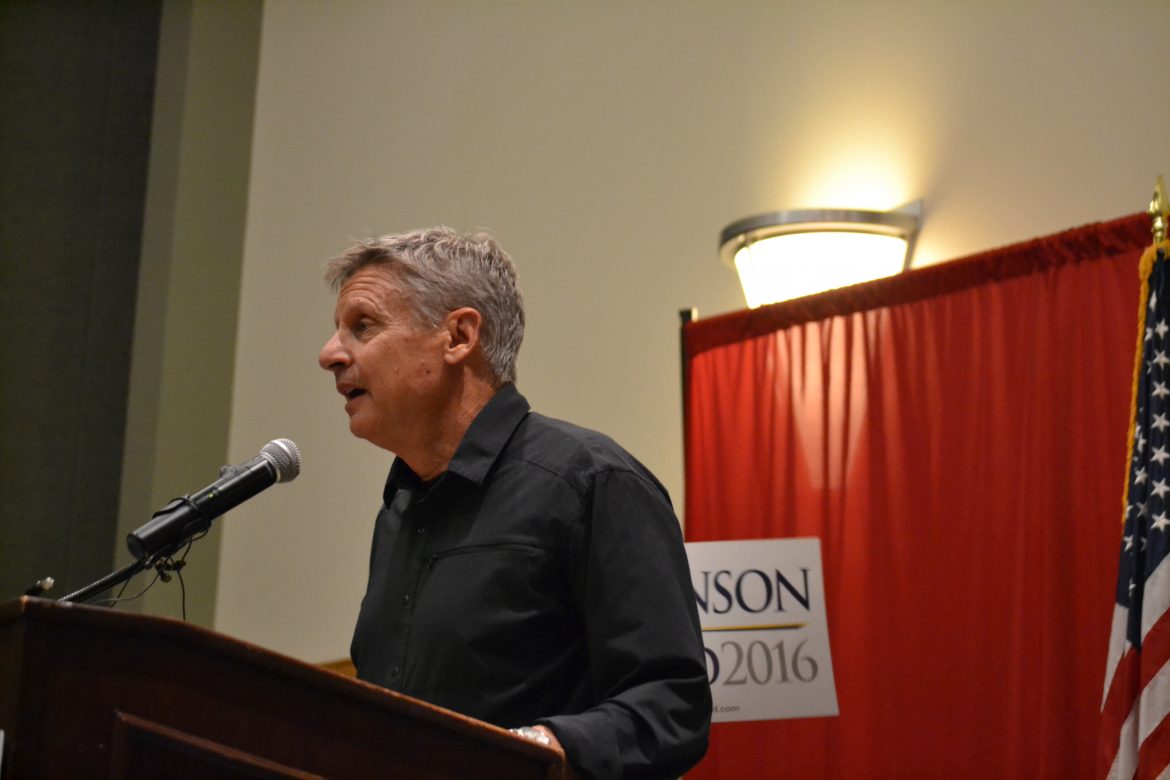 While both New Mexico Democrats and Republicans were carefully watching national election numbers roll in on Tuesday night hoping for a win for their candidate, Gary Johnson supporters in Albuquerque were cheering for the win of getting the support of three percent of voters nationwide and nine percent in New Mexico.

A few hours before Donald Trump gave an acceptance speech, the Libertarian Party nominee  and his supporters were near Old Town in Albuquerque, celebrating what was ultimately a presidential loss. But they didn’t see the showing as a loss, instead seeing the best showing for a Libertarian candidate ever.

Libertarian National Committee Chair Nicholas Sarwark kept on eye on the numbers throughout the night, but seemed more concerned with his party’s numbers and less concerned with the numbers of the two candidates who finished well ahead of Johnson.

Gary Johnson talking to supporters, backed by his two children and his fiance

Sarwark and his party also seem focused on the long game—eventually getting even footing with the two major parties—during this election cycle. Now, Sawark said, this election may have brought to light racism within the Republican Party and encouraged disaffected Republicans to seriously consider the Libertarian Party as their new political home.

Sarwark described how his party may grow in the next two to four years.

“[Republicans] are having to make a choice of whether or not they want that bigger vehicle where their passengers next to them in the seat are saying mean and hurtful things about other Americans,” Sarwark told NM Political Report.

Sarwark called transparent racism and bigotry in this election cycle “one of the best things that happened” because it encourages more pragmatic Republicans to question their association with the GOP.

“For those Republicans that feel that the political home that they had has been been taken over,” Sarwark said. “We want to represent a new political home.”

The party’s vice presidential nominee Bill Weld also encouraged supporters to see the big picture and said he envisions a split in the GOP before the next presidential election.

“I thought from the beginning of this campaign that we’re going to have a replica of the 1850s,” Weld told the crowd of supporters. “The Republican Party is going to split into two like the Whig Party.”

Weld went on to compare some of Trump’s alt-right followers to the anti-immigrant Know Nothing Party of the mid-19th Century and offered a glimmer of hope.

“The Know Nothings are going to disappear and the nice, common decency people are going to elect a wonderful president in three or four years,” Weld said. “In 1860 that was Abraham Lincoln.”

When Johnson finally took the stage, he added his own silver lining to his loss.

“I think the next election cycle there’s going to be so many wonderful candidates lined up from the top to the bottom on the Libertarian ticket and I think there is going to be a third voice,” Johnson told the cheering crowd.

Johnson also defended voting for a third party in this divisive election.

Johnson asked the crowd, “If you go for the lesser of two evils, what do you end up with?”

The crowd shouted back unanimously, “Evil!”

Johnson continued to encourage the crowd by preaching his thoughts on third party voting.

Johnson spent most of his time off-stage surrounded by eager supporters snapping pictures and trying to get the nominee to sign hats and shirts.

Outside the cozy environs of the Hotel Albuquerque, after it became clear that Trump won the election, many pointed fingers at Johnson for spoiling the election for Clinton.

“I hate you. Enjoy your retirement, if that (sic) possible,” one Twitter user wrote about Johnson.

Another person wrote, “seriously if you voted for this guy just go ahead and kill yourself.”

As the rest of the numbers came in and Democrats a few miles away were reeling with a presidential loss, Libertarians and other Johnson supporters were making use of the dance floor.

Still, even as Democrats tried to process what happened and Republicans celebrated a historic victory, the Libertarians were focused on their own party.

In his closing statements to the crowd, Sarwark offered a message to both Republicans and Democrats upset about the presidential results.

“Your tears are delicious and your parties will die,” Sarwark yelled.