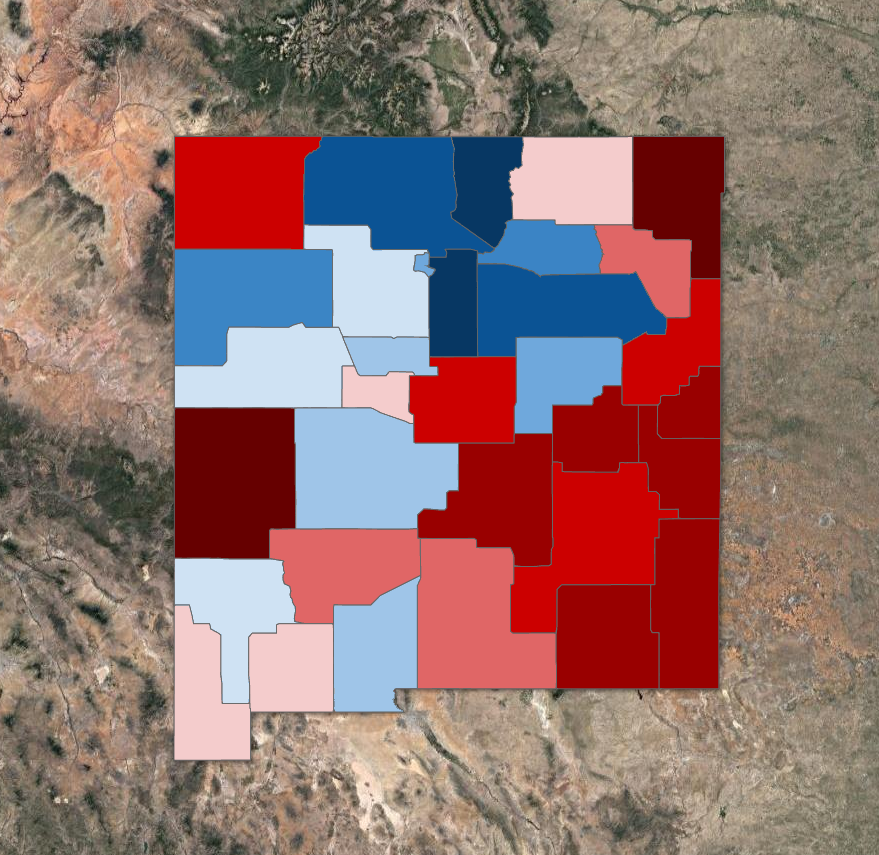 More people voted in 2016 than in 2012, but turnout fell when compared to the amount of registered voters.

And both total votes and turnout fell far behind the numbers of 2008.

Because of this and other factors, Hillary Clinton won New Mexico by a smaller margin than Barack Obama did in either 2008 or 2012, and even lost some counties that Obama won four years ago.

In fact, Clinton received a lower share of the vote in every county in the state except for Los Alamos County. Vote totals will not be finalized until canvasses are complete, so all numbers in this post from 2016 could change slightly.

The maps below reflect the margins in each county between Clinton and Trump in 2016 and Obama and Romney in 2012 as a percentage of total votes.

Another big factor besides turnout was the presence of Gary Johnson, the former New Mexico governor who was the Libertarian Party nominee for president this year. While Johnson was on the ballot four years ago, he received nearly 46,500 more votes in 2016.

Johnson’s 9.35 percent of the vote in 2016 is the third-best showing in New Mexico by a non-major party candidate, behind the 16.9 percent Theodore Roosevelt received in 1912 as a Progressive Party candidate and the 16.12 percent Ross Perot received as an independent in 1992.

Green Party candidate Jill Stein also did slightly better in 2016 than she did in 2012.

While more people voted for Clinton than Trump overall, Clinton was kept under a majority of the vote total by the minor-party candidates.

Overall, the percent of registered voters who voted fell from 62.69 in percent 2012 to 62.1 percent in 2016. The 62.1 percent mark would be the lowest turnout in a presidential election since at least 1992, the earliest year that the Secretary of State’s website has data on voter registration and election results.

Los Alamos County saw the highest turnout rate this year, with 77.76 percent of registered voters in the county casting ballots.

These are the four-most populous counties in the state. In fact, these four counties made up 479,701 of the total votes, or 60 percent. Bernalillo county itself made up 34.47 percent of the state’s total vote, despite voter turnout of just 60.97 percent. Eighteen counties had a higher percent of registered voters cast ballots than Bernalillo County.

Sandoval and Dona Ana counties were the only two counties to have more voters in 2016 than in 2008.