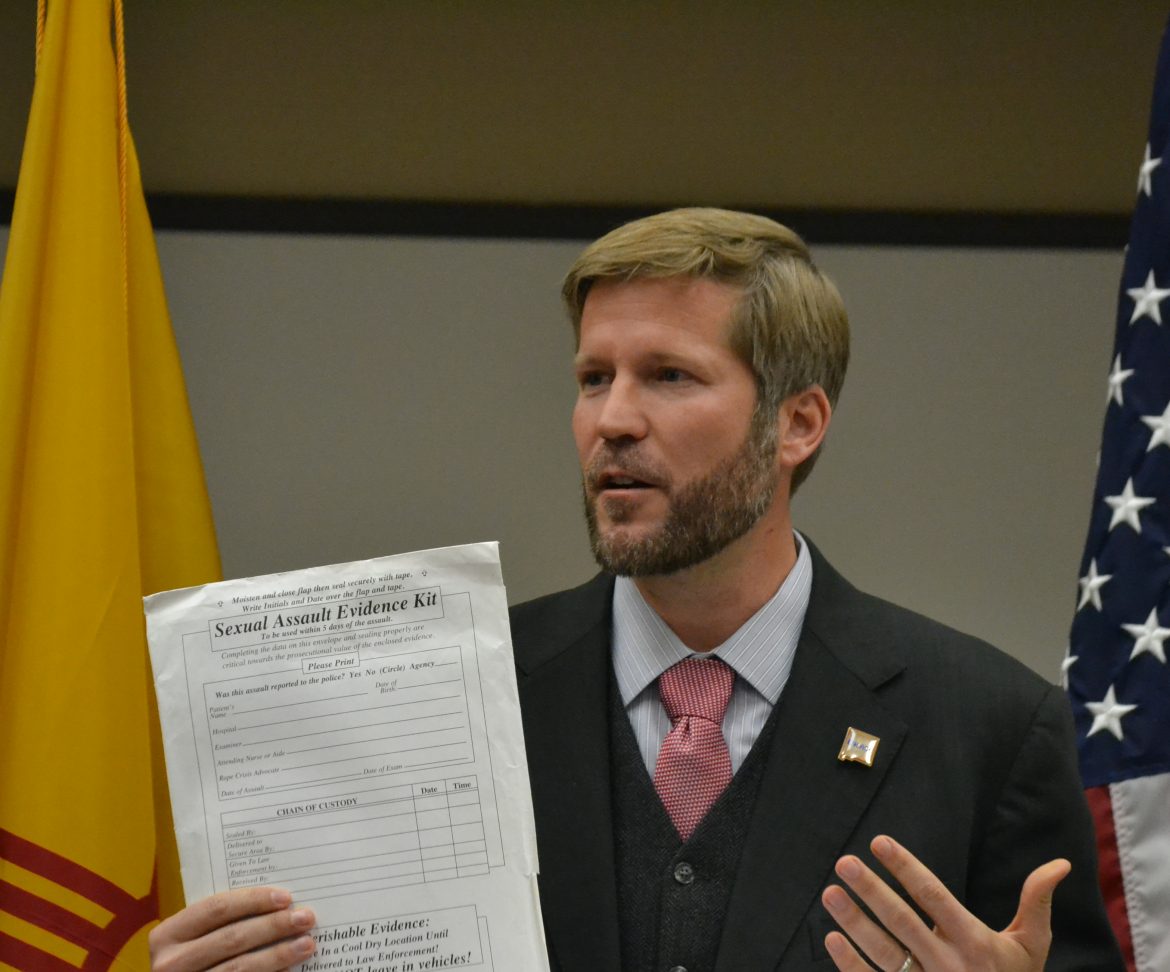 Before he leaves to work every morning, State Auditor Tim Keller says he always talks with his young daughter about the day ahead.

For him, Tuesday morning posed a problem. That’s because he wasn’t sure how to explain what he was set to present to the public.

“It was little tough this morning,” Keller told a room of reporters.

He released a report of proposed solutions to clear the backlog of more than 5,000 sexual assault evidence kits in police departments throughout New Mexico.

More resources and victim outreach are two significant solutions for avoiding further backlogs, according to a report released Tuesday by the Office of the State Auditor.

Almost half of the kits reviewed by Keller’s office hadn’t been tested by law enforcement agencies because officers either didn’t trust the victim’s credibility or had lost contact with the victim.

“These statistics are particularly troubling because they suggest a fundamental misunderstanding of the realities of the victim’s experience after a sexual assault,” the audit reads.

According to the audit, 21 percent of the sexual assault evidence kits, commonly known as rape kits, in New Mexico went untested because of a “lack of victim credibility.”

Auditors also found that another 21 percent of kits went untested because of “lack of victim cooperation or contact.”

“New Mexico law makes this decision simple: law enforcement agencies are required to test the Kit whether they believe the victim or not,” the audit reads.

Valencia Shelter Services Victim Services Coordinator Stephanie Villalobos spoke about the personal aspect of victims working through the aftermath of sexual assault. She mentioned a victim who lost hope because of a lack of communication and outreach by law enforcement.

“That victim decided not to prosecute,” Villalobos said. “[The attacker] is still at large.”

Government Accountability Officer Sarita Nair came up with the idea to look into the backlog, Keller said. Nair told reporters she had a hard time hearing about the number of victims who were viewed as not credible.

Nair added that the state could ignore the social aspect of the problem and focus just on money.

“But we shouldn’t,” Nair said.

Keller’s office also found that many law enforcement agencies reported they lacked the resources to properly process kits in a timely manner.

“You could not buy yourself out of this predicament,” Weaver said.

Weaver cited the near $2 million his office asked the state Legislature for to review the backlogs along with legislation asking for almost $4 million to do the same as a step in the right direction.

“It’s not just a money thing, but money gets you started,” Weaver said.

The problem of untested rape kits is a “moving target,” as the audit only looked at evidence kits that were untested as of December 2015.

Since last December, law enforcement agencies from around the state sent more than 800 untested kits to the state’s Department of Public Safety crime lab, decreasing the number of kits sitting, untested, in evidence storage within individual police departments.

“We would show up and there would be nothing to audit,” Keller said.

Bernalillo County, which uses an Albuquerque Police Department lab, did not see any decreases since last year.

While the number of untested kits in jurisdictions around the state has decreased, the actual evidence mostly remains untested.

“In other words,” the audit reads, “the inventory of historically untested Kits has not been reduced materially, but many have shifted from local law enforcement to the State Forensic Lab, where most of them still await testing.”

No one from the Albuquerque Police Department, including Crime Lab Director John Krebsbach, showed up to the press conference to answer questions.

The backlog in New Mexico first received media attention when Albuquerque Police Department officials said they missed out on a grant to help clear the backlog. Albuquerque’s incoming District Attorney Raul Torrez campaigned on the issue and Keller hinted last November that he would begin looking into why so many kits go untested and how to best work through them. Keller announced in May his plan for surveying stakeholders statewide to better understand the issue.

Keller said increased attention on the backlog provides the state to be No. 1 in fixing the problem.

“New Mexico now has a chance to be ahead,” Keller said.

In New Mexico, 1 in 4 women and 1 in 20 men have experienced sexual assault in their lifetime. Anyone seeking help can find resources at: http://nmcsap.org/find-help/